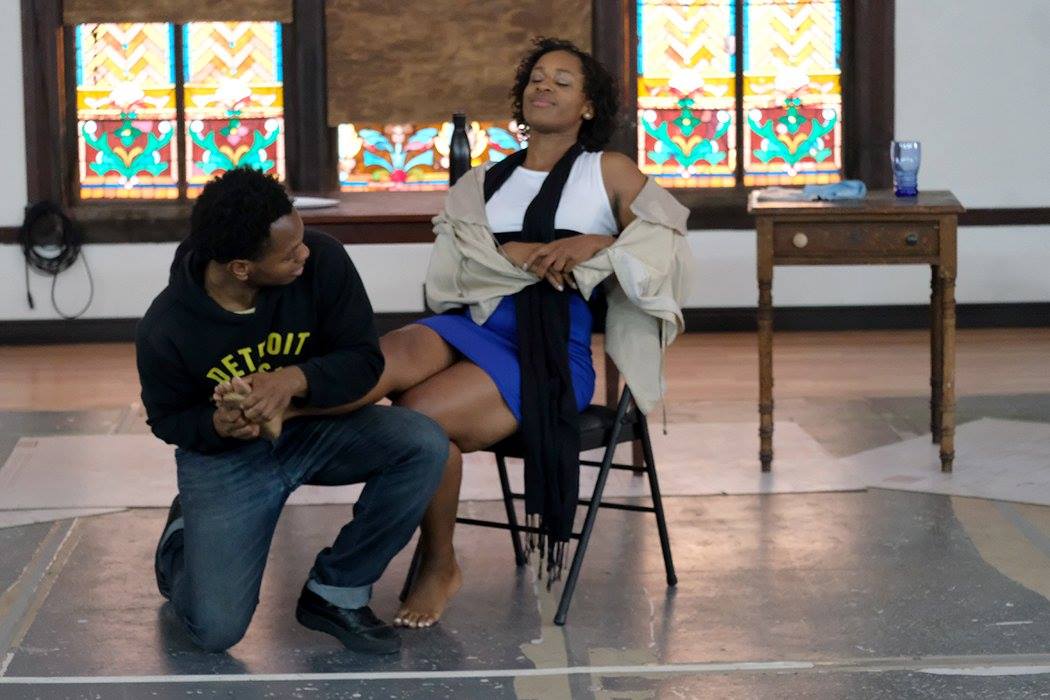 The stage setting of “This Land Was Made, ” a workshop production, shows the stark struggles underlying Tori Sampson’s play. Presented by Ubuntu Theater Project at the Brooklyn Preserve in Oakland, the stained glass of the former Grace Presbyterian church creates a dazzling contrast to the shelves lined with brown and green booze bottles. The shimmering windows and the dirty bottles mimic each other as light shines through them. The dive bar in an abandoned church sets up the conflict between a militant Black Panther and a bookish Black Cal Politics student, who respects “law and order.”

Most of Sampson’s play takes place in the bar owned by the no-nonsense Miss Trish (intense, exciting Halili Knox). The bar ends up being the scene of dances, speeches, interrogations, and even a haircut or two. This Oakland dive bar feels like home to a lot of people, not just Miss Trish’s family. The bar buzzes like a lightning rod, attracting all kinds of dreamers, cynics, and rebels.

A highlight of the play is Huey Newton, played by William Hartfield. The role of Newton is essential to the production. Hartfield ports the co-founder of the Black Panthers with a boiling charisma, both loud and quiet. Hartfield’s speech as he paces back on forth on top of the bar is captivating,  while the rest of the cast writhes in slow motion, creating a haunting atmosphere.

Troy (thoughtful Terrance White) is Newton’s opposite as a conservatively dressed college student with no stomach for Newton’s revolutionary zeal. At the midpoint of the play, Troy confronts the jumpsuit-clad Newton who is in prison for killing a cop. For once their usual energies are reversed, with the normally calm Troy on the verge of breaking down. William Hartfield displays an intense, quiet charisma, while concealing Newton’s energetic rebel spirit. The scene forces us to acknowledge how easily the two men’s positions could be reversed, asking us to find the logic of their roles.

The police (Andrei Dolezal and Evan Feist) are as intimidating as Huey Newton. Rather than use emotional appeals, like Newton, the officers project an oppressive aura, wearing storm trooper armbands.

A manhunt scene magnifies the Man’s ominous presence: Every light in the house cuts out and the cast, equipped with flashlights, searches the stands as Halili Knox, Nathalie Autumn Bennett, and Champagne Hughes take up the role of police dispatchers. They blare out racial descriptions and refer to their targets as both victims and perpetrators. You may get spots in your eyes if the cops decide to take an extended look at you; they act like they are on the verge of rounding us up.

Although the story takes place in 1967, a pivotal time of the Civil Rights Movement, Sampson’s play highlights just how little has changed. Mr. Far (Anthony Rollins-Mullens) floats in and out of the story like a ghost, serving as a narrator beyond the constraints of time. Mr. Far calls our attention to the past, present, and future of the African American struggle for survival and equality. “This Land was Made” brings Oakland’s past into the present, where it remains tragically relevant.