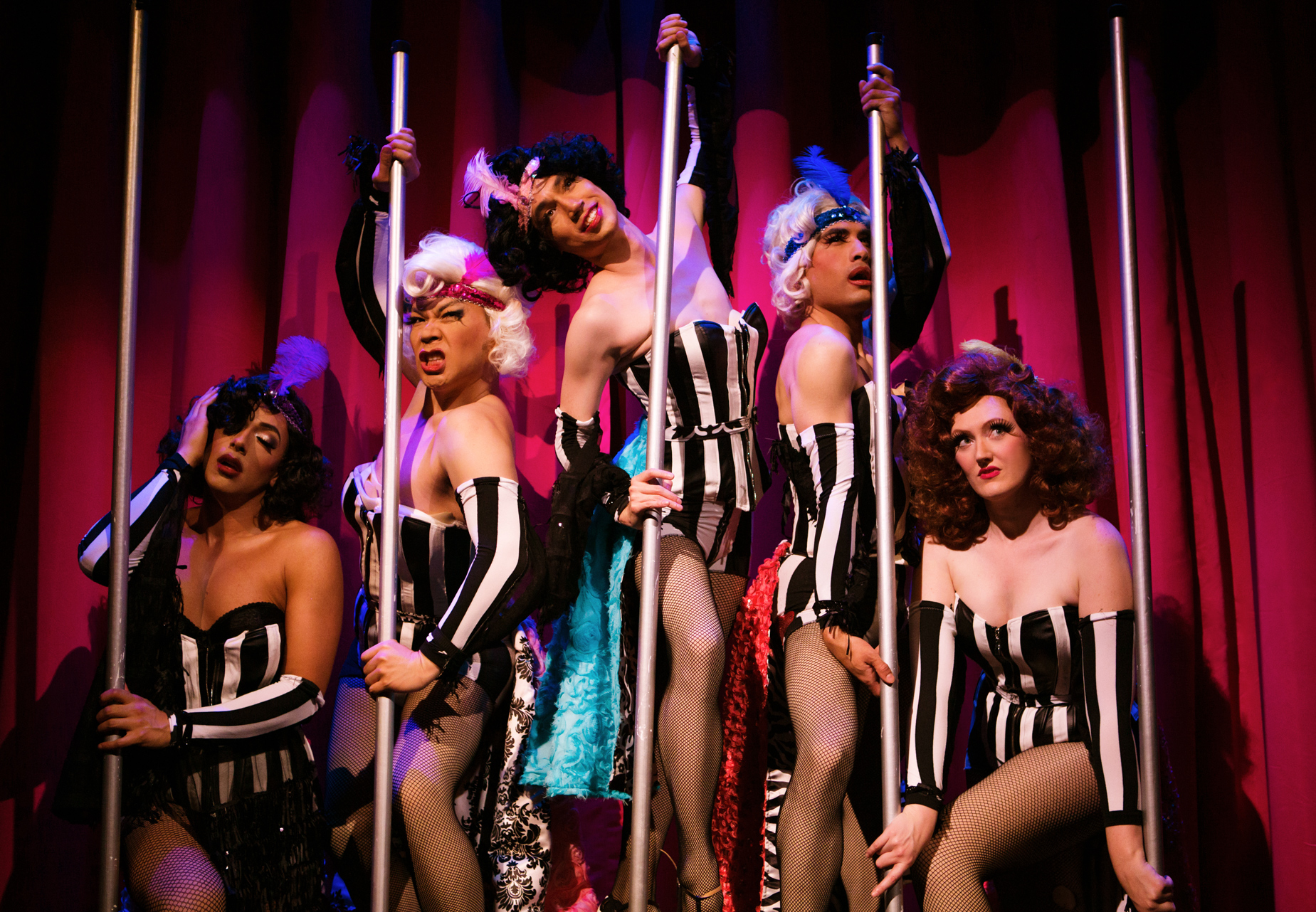 At S.F. Playhouse’s “La Cage aux Folles,” the curtains, stage, and the audience are bathed in a fuchsia tint. Georges and Albin’s living room features a peacock palette—with teal, purple, and gold trimmings. And Director Bill English teases us with comic wallpaper that adds to the story. In “Cage,” the blue-green wallpaper is adorned with gold French lilies, hinting at French aristocrats and revolution.

“La Cage aux Folles” is the name of Georges’ poppin’ drag nightclub on the Riviera. The club’s name can mean “A Cage for Crazies” or “The Birdcage” or “Cage for Queens.” Georges (suave Ryan Drummond) is the charismatic club owner. His partner, Albin, also stars as Zaza (divalicious John Treacy Egan). Zaza is Albin’s drag alter ego. Of course, this is all in the 50s, when gay marriage is not legal, and they are living in stuffy Saint Tropez on the French Riviera.

“La Cage aux Folles” speaks to us about bullying, self-image, and loyalty. In the gay person’s anthem “We Are What We Are,” the drag queens from the Club (Les Cagelles) assert their right to be who they are.  S.F. Playhouse mingles women and men in the brilliant drag, dancing, and singing roles.

Georges’ son, Jean-Michel (energetic, charming Nikita Burshteyn), who was raised by Albin and Georges, decides to marry at 24 years old. First, he must introduce his future in-laws to his same sex parents.  But flamboyant Albin has not been invited to meet the conservative politician father (Christopher Riber). You know that Albin refuses to sit still for his son’s slight.

I could go on and on about Egan’s Albin. His Zaza communicates superbly, using his whole body. His adorable and hilarious mannerisms are touching and true. Egan makes the perfect mother, drag queen, and wife, in or out of drag.

After Les Cagelles perform “We Are What Are,” Albin turns it into the sweet solo “I Am What I Am,” which becomes the famous and touching One Queen ballad. When Albin looks at us, his fiery eyes reveal a freshly broken heart. In fact, the First Act curtain leaves some of the audience in joyful tears. We feel empowered by Albin’s refusal to be shamed by traditional roles. Albin maintains his gay dignity while putting his family first. He has some surprises saved for us in Act Two!

Albin is assisted, hilariously, by Jacob (topsy-turvy Brian Yates Sharber), who is his melodramatic, loyal and cocky butler—excuse me, I mean “maid.” In a French maid’s costume, Sharber shoots well-timed comedic quips at conventional characters. He even throws in some soprano vocals to cap his dynamic stage presence. When Sharber is on stage, he commands the scene: a joy to watch.

Director Bill English gives us a fresh blend of melodrama and sit-com. The music is magical and the performances are first-rate. Based on a French farce by Jean Poiret of 1973, and then the French movie of the 70s, and later the U.S. movie with Robin Williams and Nathan Lane, “Cage” has changed people’s lives. Harvey Fierstein’s story of gay life has promoted gay rights, winning multiple Tony Awards. “Cage” has been a force for liberation, for Liberte, Egalite, and Fraternite.

Now, Bill English’s new production does that and more. He has raised the bar to include men, women, and all of life in a joyful celebration—in an intimate show that includes you, me, and everyone. There’s a lot of talent and a lot of love in this musical. A Must See.