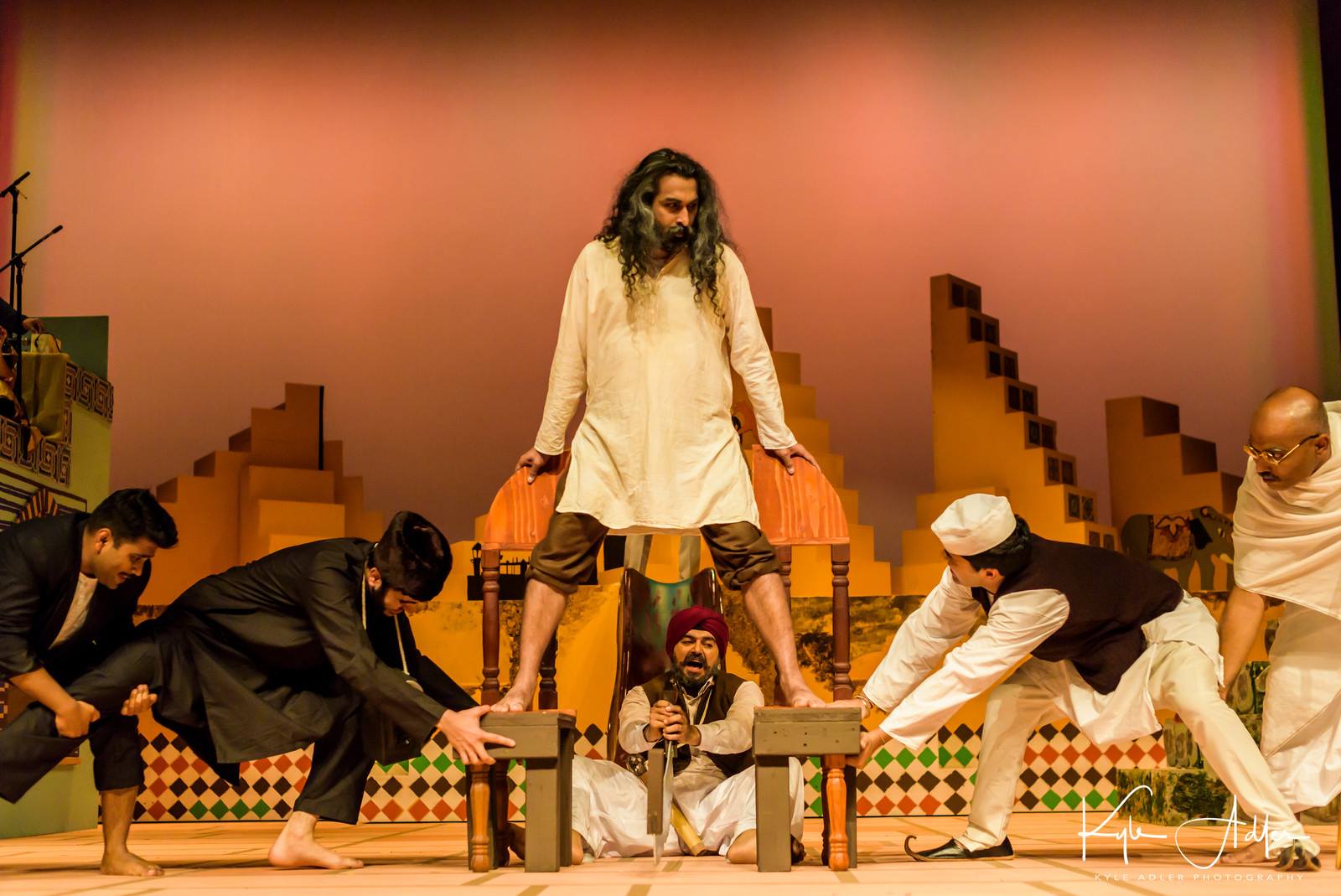 “Toba Tek Singh,” an insightful, thought-provoking, and witty musical by writer and director, Sujit Saraf, is based on a short story by Saadat Hasan Manto, which takes place a year after the 1947 Partition of India and Pakistan.

The title echoes the nickname given to Bishan Singh (spectacular Chanpreet Singh), who is a certified “madman.” Bishan Singh, an elusive character, lurks in the shadows of the political circus of the disastrous Partition. As a mad man, Singh remains silent, except for a few sentences of gibberish. He is long-haired and bearded with eyes that look like they have not blinked in a decade. But Singh sees through the trumped-up drama of the “leaders that would be.”  The “leaders” are played by his ward-mates: Jinnah of Pakistan, Nehru of India, and Mahatma Gandhi with his esoteric philosophies. Singh makes us wonder if the politics itself is much different from a mental ward.

In 1948, the leaders decided that the inmates of lunatic asylums should be exchanged. The Hindus and Sikh inmates from Pakistan were uprooted to India. And Muslims from India were transported to Pakistan. Saraf captures the “split,” when a tall, regal, wooden chair sits on an empty stage with the backdrops of a Mosque decorated in Pakistani style. The ward mates come on stage and get into their roles:

Jinnah, the Pakistani leader, says, “Well, this chair is in Lahore, so it must belong to Pakistan.”

The Punjab argues, “Well, Lahore is in the state of Punjab so it belongs to Punjab!”

“Yes, however, the wood is from India, so it belongs to India, but the craftsmanship is Bengali, so is it really Bengali.”

The politicians come up with a solution: “Let’s saw the legs,” while Bishan Singh is standing right on top of the chair.  How maddening is it to see one homeland sawn into two? We understand how ignored and misused the uprooted people felt during the brutal Partition. One of the play’s touching songs asks, “Why do we need two homelands? What do we do with two?” That musical question helped me understand what my parents must have felt. They have the “split” in their blood, even though they never talk about it.

The lively music, led by Nachiketa Yakkundi, evokes conflicting emotions. We feel the depths of confusion, and sorrow of a nation split. The music connects me to my parents’ pain. And I understood, finally, our similarities. As an Indian-born American, I often feel a separation, too.

How do you depict the harrowing experience of the separation of land without thinking about the crippling effects on the people and their roots? My lineage from Sindh (present day Pakistan) and in 1947 my entire family was uprooted to start all over in India. I feel the effects of my lineage, deeply. The witty banter on stage reflects the bright, witty costume designs by Soumaya Agastya. She weaves the scenes together, helping us visualize the radical insanity of Partition. We feel the madness and stubbornness of leaders who permanently altered the lives of millions.

Bishan Singh, the “madman,” ends with the question: “Why do we need two homelands?” Where does his land, the Toba Tek Singh farm, end up, in Pakistan or India? Singh cannot bear the Parition, so his body decides for him that he will forever be of only one home.

Thanks to Naatak Theater for giving us a slice of our heritage—served in a juicy rich banquet of colors and satirical fun.