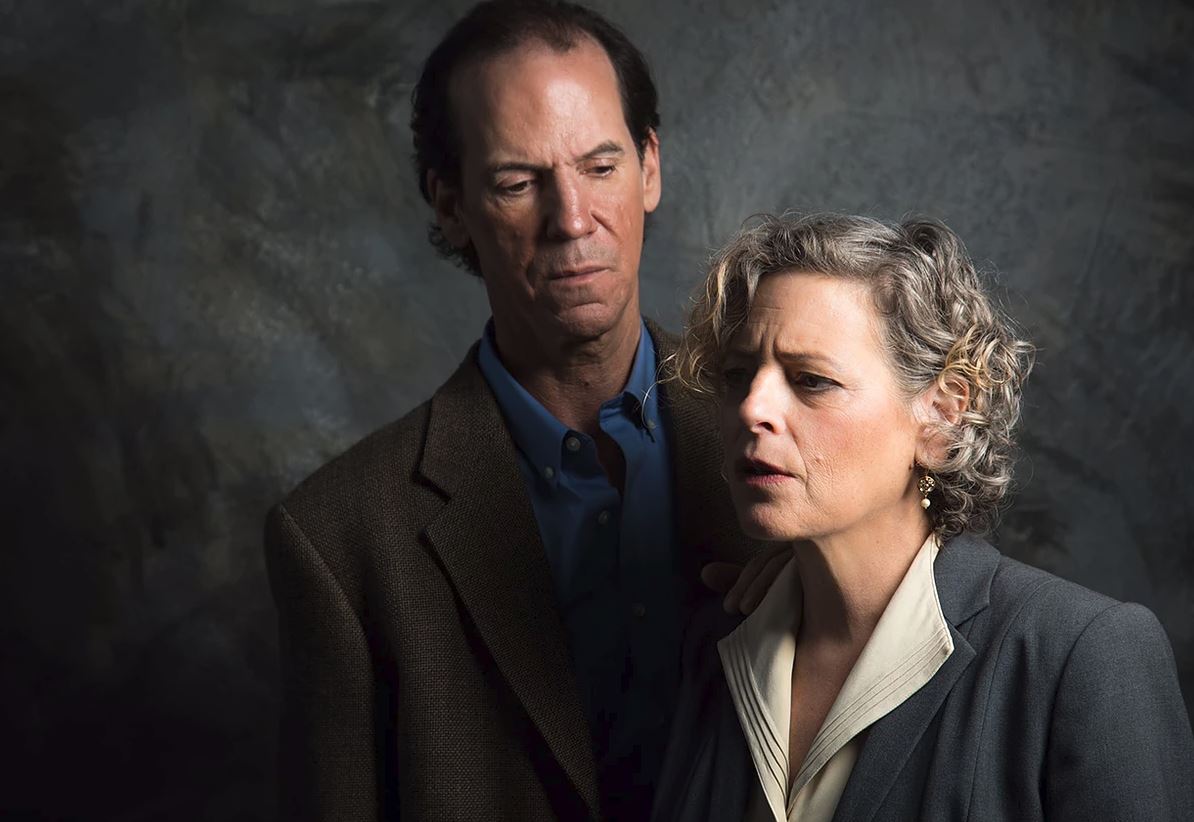 “The Other Place” shows us how to empathize with a dementia patient. We follow a scientist, her family, and caregivers as she begins to enter that other world. Director Taylor Korobow places us inside the demented brain as it declines.

Juliana, a no-nonsense scientist and entrepreneur, is dedicated to her research on Alzheimer’s disease. After she discovers a new drug that could treat Alzheimer’s, she abandons her research in hopes of pitching the find for a pharmaceutical company. At a medical conference in the Virgin Islands, she presents her new treatment to a gathering of doctors. Her PowerPoint presentation projects the blue molecules of Juliana’s discovery. Her monologues feel like an afternoon in a warm lecture hall until suddenly, her own mental derangement erupts.

Her husband Ian (tautly emotional Robert Parsons), a successful oncologist, tries his best to cope with his wife’s worsening condition. But she is difficult, intractable, and angry. When he realizes he cannot help the love of his life, Ian breaks down, his face reddening as he endures her sarcasm and low blows.

During “The Other Place,” I began to feel like I was entering Juliana’s confused state.  That’s the trick of Sharr White’s play—he gets us inside Juliana’s head, and we are forced to piece together what really happens.

White meshes two stories into the 90-minute drama, without intermission. One story depicts the delusions of dementia and the other one may be external truth. White pulls us in and out of the two conflicting stories; both revolve around Juliana’s estranged or missing daughter, Laura (the versatile Lisa Morse).

It is difficult to keep up with the warring plots on stage. Stacy Ross embodies anxiety and haughtiness with stiff body language and a clenched jaw. However, the plot feels crammed into the script. Even with the detailed acting by four fine performers, the competing plots challenge our attention.

Walking down Shattuck Avenue from Live Oak Theatre, I passed other audience members who were wondering out loud about the “what-ifs” in the play. “The Other Place” is a grower not a shower. The more I ponder what happened on stage, the more ideas emerge from the obscurity.

“The Other Place” by Sharr White, directed by Taylor Korobow, at Symmetry Theatre, Berkeley, California, through Sunday, August 13, 2017. Info: symmetrytheatre.com