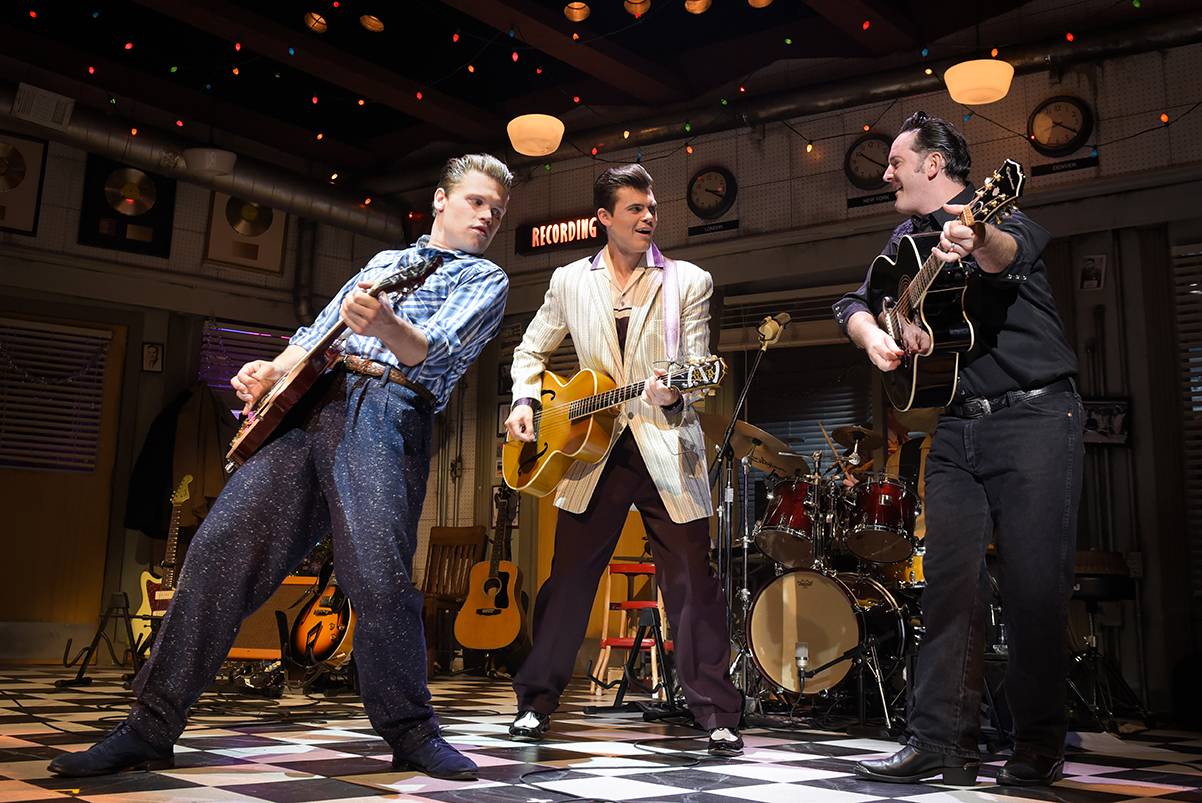 The lights come up inside Sun Records, which used to be an auto body shop. The black and white checkered floor is worn and discolored in spots. An unassuming Christmas tree stands in the corner, draped with tinsel. Four microphones stand by a piano, an electric guitar and amp, a hollow-body jazz guitar, and full drum kit. Clocks and gold records gleam from above.

Sun Records Founder Sam Phillips (steadfast, agile Michael Ray Wisely) welcomes us to the historic night we are about to witness. On December 4, 1956, Jerry Lee Lewis, Carl Perkins, Johnny Cash, and Elvis Presley all happen to be at Sun. And the epic jam session that ensues is considered one of the seminal moments of rock and roll.

Jerry Lee Lewis (incredible, coiled spring Sean McGibbon), with a shock of strawberry-blonde hair, kicks things off. Lewis is a loose cannon, a show-off, and an egomaniac. But damn, can he play the piano, even with his feet! Sparks fly when Perkins (compelling, expert lead guitarist John Michael Presney) arrives to record a few tracks with Lewis. Phillips plays referee until the two realize each other’s talent. They settle into a rollicking time, with Lewis jangling the keys like it’s an Olympic sport and Perkins dashing off riffs with ease.

Before the show starts, Artistic Director Michael Butler warns us we won’t believe our eyes and ears. The music is 100 percent live, 100 percent real. And he’s right. The sound coming out of these musicians is big and authentic and absolutely extraordinary. We’re having a ball watching Lewis and Perkins trade barbs and songs. But then, in walks Johnny Cash (talented Sky Seals) and things get even better—and deeper. The icing on the cake is Elvis (gifted Trent Rowland), who shows up with his girlfriend, Dyanne (sassy crooner Brittany Danielle), a lovely contrast to an otherwise all-male play.

There is more to “Million Dollar Quartet” than the magical music. Plot tension arises from secrets the stars are keeping from each other. The stakes are high. Each artist stands to lose something irreplaceable.

If you’re wondering whether they are going to play your favorite song, the answer is yes. Although “Quartet” packs in over two dozen hits, each feels fresh and new, tapping into some major nostalgia. Each musician is fantastic in his/her own right and adept at channeling the musical legends they are cast to play, avoiding caricature.

Arguably, the best performances come during the encore, when the characters re-emerge in sparkling blazers to play one last song each. Even Phillips shows off his harmonica skills in the boot-stomping encore. And of course, showboat Lewis closes it all out, balancing on his piano bench with one leg high in the air while he pounds the keys, jumping on top of the instrument and playing behind his back, like a true star. After all, Lewis once set his piano on fire and played through the flames to upstage a closing act.

“Million Dollar Quartet” is a fitting tribute to the 50th Anniversary of the Lesher Center—and Center REP does a great job. I sat three seats down from a woman who was there on the opening night, fifty years ago:

“Trade me seats so you can talk to Sally,” her date said to a woman down the row, as everyone was settling in.

Did Sally get any sleep? Not a wink. Her eyes were riveted to the stage.