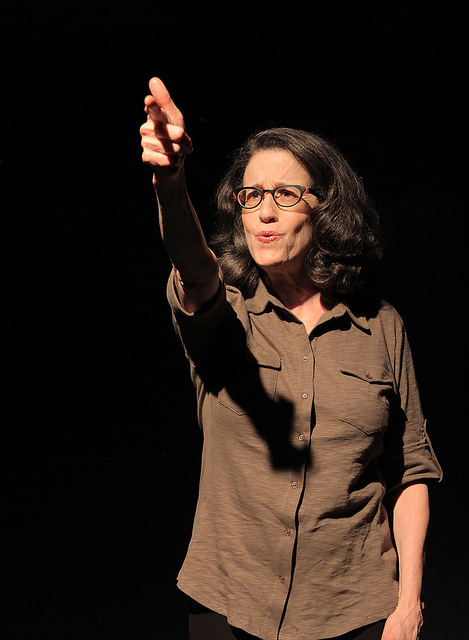 Dressed in somber, nondescript slacks and shirt, Sherri Rose works with minimal props in her solo show “How Not to Die.” Initially, she is brightly earnest, a kind of cheerful teacher, referring to studies and research. By the end, passion drives her words.

In addition to providing statistics on such things as how often plane crashes occur, she portrays several characters from her life and from interviews with others. Early on, she details how she learned to survive nuclear war in 1961, in the 5th grade. Over 50 years later, I also remember the training. But Rose makes me jealous. In her suburban Pittsburgh school, they filed in two’s down to the basement to duck and cover, and even got to go home if they lived near-by. That’s a lot more options than my suburban Chicago school provided. We just ducked and covered right there under our desks.

Nothing in those drills, of course, provided any real protection to either of us. How bizarre it all must sound to Gen-Xers and Millennials. Well, just wait, you younger folk. If current relations with North Korea continue to deteriorate, soon all of us will receive new expert advice on handling nuclear radiation at home and school. It could be good business, again.

For current times, Rose provides practical steps for survival, from how to save ourselves from germs in a public rest room, botulism from cans with expired use dates, to terrorist attacks. We get to participate by offering suggestions on what books to put into the earthquake preparation bin. What’s the one book you will want to read over and over? There are laughs, but before long the fears of comfortable First Worlders come across as pretty tame for a show called “How Not to Die.”

However, Rose contrasts the boomer duck and cover experience with that of a ten year old in school, now. Today, children are drilled on how to respond to a shooter on campus. There’s an unsettling few minutes as Rose portrays the boy, and then the teacher, matter-of-factly describing the schoolkids’ fears. The clear high point of the piece comes from the interview with her friend Marika, a Hungarian holocaust survivor. Marika describes experiencing bombings during WWII, while still a small child. She explains how her cousin Vera, just a few years older than the other kids in the bomb shelter, guides them during and after the attacks. Vera calms the little ones during the bombing, but after the bombing Vera’s advice turns practical—and harsh. In our affluent world where we with hover over the children and try to hide the horrors, Vera’s words to the little ones shock us.

The dangers that frighten us in the midst of our “comfortable California lives” are ludicrous to Marika, the survivor. Cousin Vera taught her to face horrors in that bomb shelter, even when while fighting barbarity. And so Rose ends by heeding third hand advice from Vera.

In today’s dysfunctional world, with immigrants under threat and bigotry on the rise, where does a Protector direct her attention? Where can she take meaningful action, now?—Does she buy more Purcell sanitizer? Or, do we face bigger threats, which demand more ingenuity from us?

“How Not To Die” by Sherri Rose, directed by Kimberly Lester, at the San Francisco Fringe Festival, at Exit Stage Left, S.F., on Saturdays, September 16 and 23, 2017. Info: how-not-to-die

“How Not to Die” is one of over thirty short pieces in the 26th Annual San Francisco Fringe Festival, running through Saturday, September 23, 2017.  Each show is an independent undertaking, one-of- a-kind, and impassioned. 100% of the ticket price goes to the performer.

Check out the schedule: the topics include immigration, the in-custody murder of a woman in Fairfax County Jail in 2015, coming of age, life as a pest exterminator, the Vietnam War, a vaginal consciousness pioneer, religious extremism, consumerism, and more. If you don’t like one, you are bound to like another. Info: sffringe.org