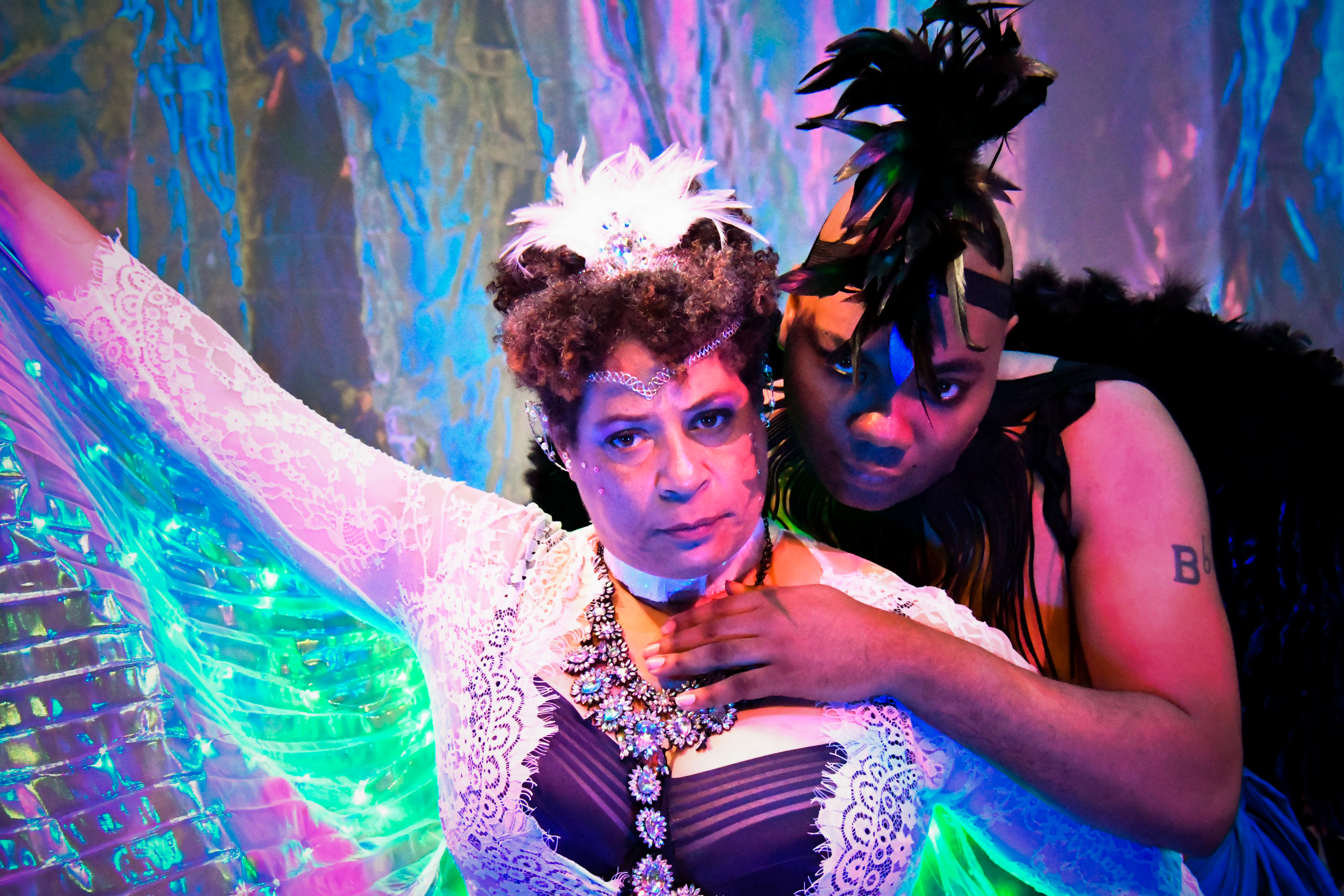 Shakespeare Explores a Labyrinth of Love

I am ecstatic that my first live Shakespeare play is “A Midsummer Night’s Dream” at African-American Shakespeare Company. Some young thespians think that a Shakespeare production will be boring. They are way Wrong!

In this “Midsummer,” the romantic fairy tale is transported to the small but culturally rich islands of Trinidad & Tobago. I would buy the audio book: William Shakespeare recited with Trinidadian accents! The music is a mix of soft electronic and island favorites like Calypso and Soca. And the steel drums take us away into the Dream.

When Puck plays a most horrible and confused Cupid, we revel in the delicious Jerry Springer-type comedy, full of twisted love connections.

While children in the crowd may ask their parents to explain some lines during the production, for most of us he language is hardly a barrier. Director Sherri Young uses body movements to highlight each line and emotion. When Hermia threatens to beat up her friend, Helena coolly ties her hair up in a bun; teenagers and adults know the classic move, indicating a girl fight is about to go down.

There is so much over the top comedy in “A Midsummer Night’s Dream” that the audience cannot stop laughing when Bottom spends three glorious minutes rehearsing a death scene. He dies while standing for a full minute, as he zealously thrusts his sword into himself more than once. He continues for another minute, kneeling and flailing his arms wonderfully; then he takes another minute, writhing as he hiccups toward his last breath. A bountiful Bottom!

Puck yanks on the mysterious flower vines hanging from the ceiling, releasing green columns of silk. They decorate the Forest for us as the play progresses. The Fairies are made of LED lights too!

“A Midsummer Night’s Dream” is a classic for good reason, we love the romance, but we empathize as well—even the youngsters. Shakespeare makes fun of the bizarre, irrational behavior that love induces in men and women.

Mayes plays a hilariously desperate Helena as she throws her body onto Demetrius to express her intense yearning for him. She often dances on her toes during her most passionate lines, adding to the fantasy. She reminds us of the emotions and constant rejection that comes from active dating.

Due to the internet, dating nowadays is like a giant love shape with more than three sides. Because it is so easy to meet potential partners, lovers become fickle. In “A Midsummer Night’s Dream,” Demetrius reaches for Helena’s womanly parts as he proclaims his “love” for her, instead of softly touching her hair. Is he just hot for her, or does he feel love, intensely?  How do we know love from infatuation?

Shakespeare playfully warns us how crazy it can be to fall in and out of love.  Since fairies use magic to create love, he is also warning us how easy it is to lose ourselves in such a mysterious feeling. These romantic feelings are a staple of human culture. Does the love potion affect our hormones or something deeper than that?

Even if you have seen “A Midsummer Night’s Dream,” you want to catch this beautiful, inspired version of a classic comedy. It’s great fun!