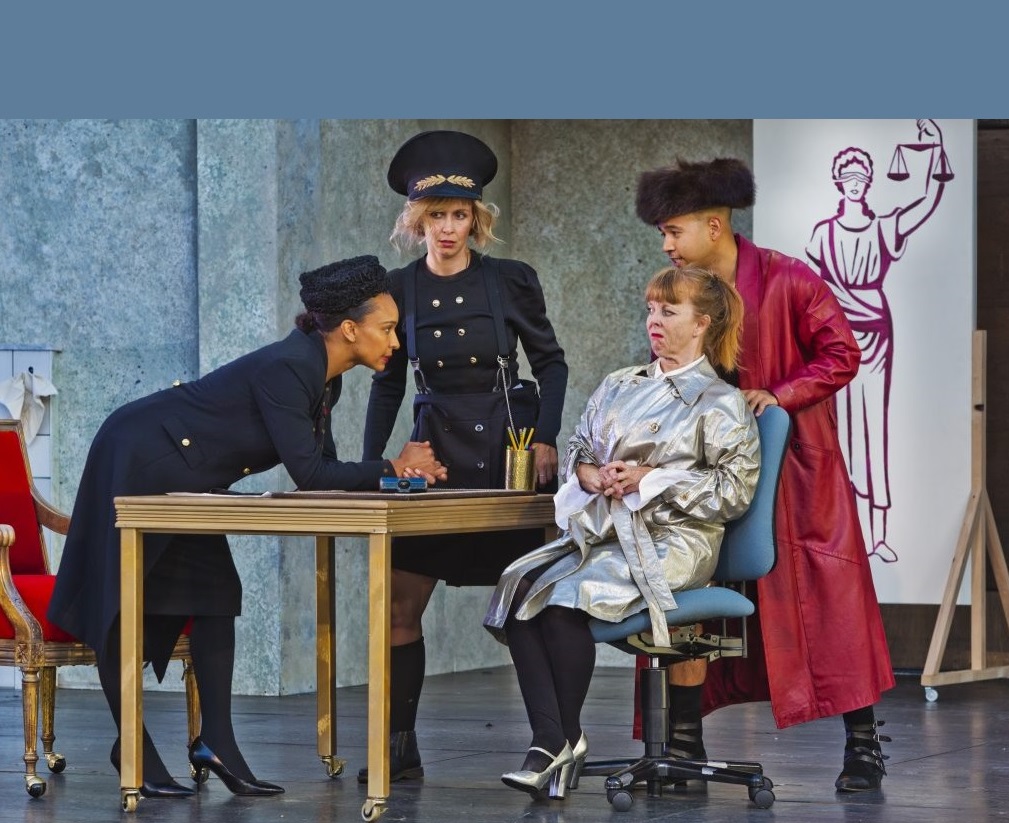 At Cal Shakes, Director Tyne Rafaeli has staged a “Measure for Measure” for our time. The striking costumes offer a first clue to this play’s modern spirit. Shakespeare’s characters sport ironic regalia: police wear comical uniforms, government officials sport super-stylish “suits,” and nuns float in fancy habits. But the citizens all wear the garb of outrageous punk resistance. We know their clothes from the young artists in San Francisco and Oakland who demand affordable rent, gather to Occupy, or become neo-anarchists.

Montana Levi Blanco’s costumes delight. Pompey, a pimp, wears a long red leather coat, shorts with spats (now there’s a look), and a fur hat. When an official assaults novice nun Isabella, ripping away her head scarf, she replaces it with a black leather beret, which she wears with her long white robe. Somehow the Duke’s glasses become a part of him.

Drunken convict Barnadine’s dirty underwear is almost as memorable as Annie Worden’s comic performance in the role. Worden also excels in the clown roles of Elbow, a constable given to word-salad, and Mistress Overdone, brothel madam. In addition she plays the dramatic role of jilted girlfriend Mariana, displaying quite a range.

“Measure for Measure” at Cal Shakes mixes tense melodrama with lewd humor, posing moral quandaries with no easy answers. Those punked-out citizens reside in a Vienna where the Duke regrets his lax enforcement of law, setting up the intrigue.

Because Duke Vincentio thinks that his liberalism has degraded the people, he takes a vacation and appoints a morally “upright” paragon, Angelo, to clean things up. Luckily, the Duke sticks around in disguise to see how his substitute fares.

Angelo immediately sentences Claudio to death, merely for having sex with his fiancee, who is pregnant.  The condemned man begs his sister, Isabella, the nun in training, to plead with Angelo for his life.

But Isabella can only save her brother’s life if she offers her chastity in trade to Boss Man Angelo. She will also lose her immortal soul.

Rowan Vickers is wonderfully on key as the Duke. At the start, he flees inself-imposed dread because he fears he has failed as a leader. His secret monitoring of events leads him to meddle in private affairs. Just when he thinks he has misrule under control, events control him and he desperately scrambles and connives. Vickers gives a masterful performance in a tricky, manipulative role, always believable and likeable.

Lindsay Rico’s Isabella, a spiritual woman forced to grapple with an impossible choice in a carnal world, embodies fury. Persecuted and powerless, her face blazes from an outraged heart as she cries out for justice.

Angelo (David Graham Jones) tries to run Vienna by austere Catholic rules. His self-righteousness binds him down, his rigid posture makes us squirm because he is uncomfortable just existing. We are not surprised when Angelo, the repressed leader, explodes sexually, nor when his self-certainty grows into tyranny.

A needed contrast to the self-righteous Angelo comes in the form of flamboyant Lucio (irrepressible Adam Schroeder), who manages to make Lucio both obnoxious and affable. Lucio gleefully tweaks his enemies with a kiss, breaking us up every time.

Kevin Matthew Reyes evokes our sympathy as condemned Claudio and charms us in the role of Pompey, the pimp who defies authority. Reyes’ Pompey is smart, speaks fearlessly, and understands the city more clearly than his “betters.”

As usual at Cal Shakes, masterful performances abound. Tristan Cunningham embodies logic as official Escalus, and also plays an appealing Juliet. Patty Gallagher wittily portrays both the mysterious Provost who hangs out in prisons, and the droll Froth, a leisure-class habitué of brothels.

Lord knows there is something for everyone in this study of justice and mercy: government corruption, hypocrisy, forgiveness, repentance, sexual harassment, powerlessness, religious authoritarianism, and loss of virginity. What most hits home is watching the reaction of a citizenry to a new regime, questioning the new authority and deciding whether to follow laws coming from a corrupt government.

The depiction of a powerless woman facing a persecuting authority also cuts deep. When poor Isabella threatens to divulge Angelo’s demand of her chastity in exchange for her brother’s life, tyrant Angelo taunts, “Say what you can, my false o’erweighs your true.”

No one will believe her, a woman; but all will trust him, a male boss. I thought of all those women in the tech industry, the ones who get harassed, no one believing them, their legal suits failing.

A captivating production, well worth a trip to the beautiful outdoor Bruns Amphitheater to see Shakespeare thriving in our time.