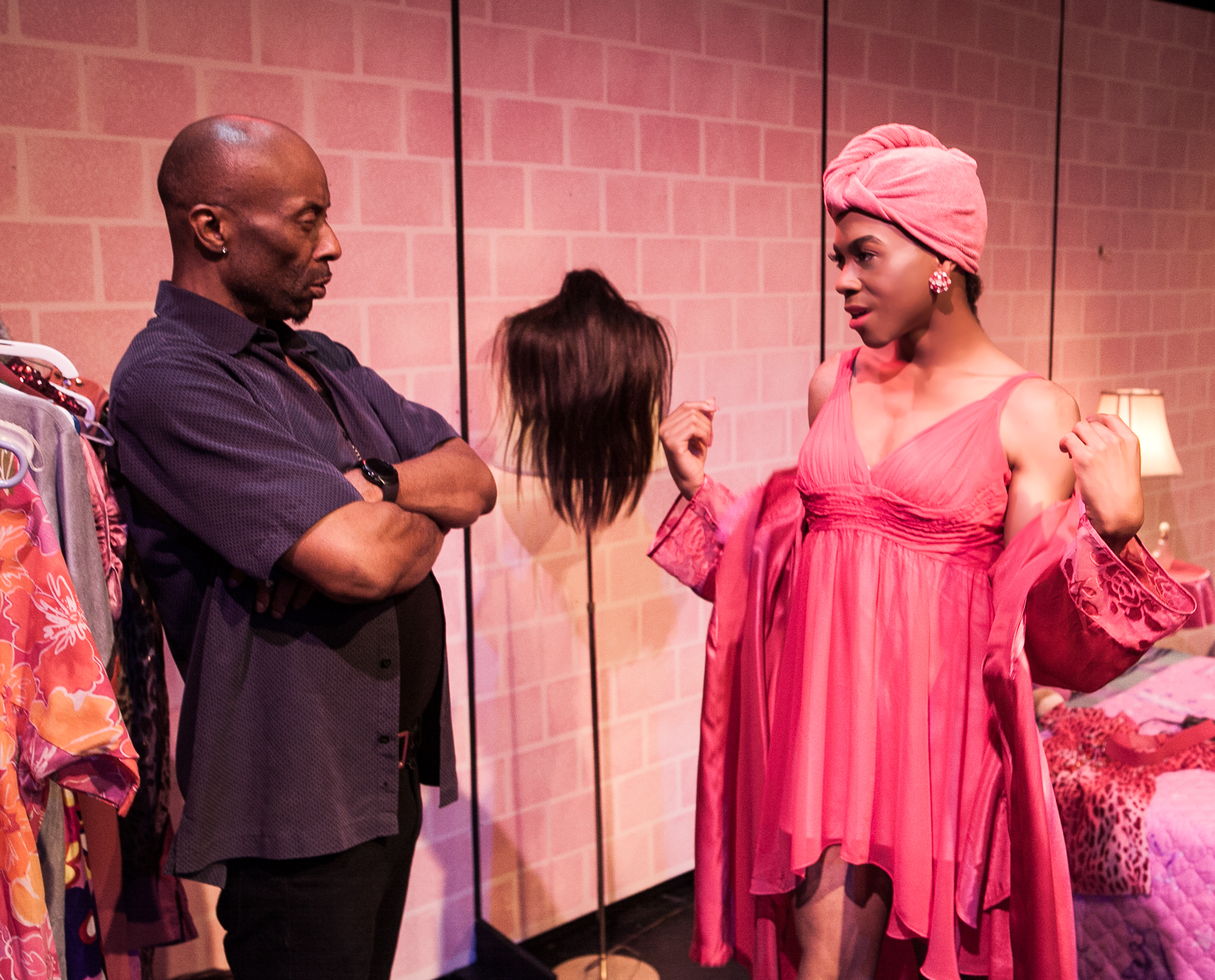 In the basement of an abandoned Victorian house, Pink, a vivacious and defiant trans woman, has created her pink-washed sanctuary, in 1989 West Oakland. Despite the violence, hardship, and transphobia around her, Pink inspires us with her freedom, glamour, and magnetism. Kheven LaGrone’s “The Legend of Pink” at Theatre Rhino offers dazzling treasures.

Pink recalls coming out as transgender, being forced out of her pastor father’s home, sleeping in shelters and on the streets until she could find her own place. LaGrone reminds us of the persistent tragedy of LGBT homeless young people in an intolerant U.S.  Today, 40% of the young people who are homeless identify themselves as LGBT. Pink’s experience is far too common–queer and trans kids need to be protected, supported, and encouraged.

Pink faces many challenges as a Black, transgender, and low income woman in Oakland. But Pink faces the obstacles head-on, with heels firmly planted, hands on her hips, and eyes shimmering with glitter. Pink dedicates her basement sanctuary to fabric, clothing, and decorations in her namesake color. Bert van Aalsburg’s set design captures the grit and charm of Pink’s glittery ground-floor refuge. Her story is woven with resilience and boldness. She carries the struggles of queer and trans people with her: the hand she’s dealt is not an easy one, and she knows she deserves more.

LaGrone crafts four tender, volatile, and alluring characters, brought to life by four superb actors, under the masterful direction of AeJay Mitchell. The curious and naïve Bradford (Maurice André San-Chez), a well-off Black kid, drives his dad’s car to West Oakland. Bradford enters one of the grittiest bars in the Hood. Wandering around the bar, he is transfixed by one woman. She introduces herself: Pink.

As Pink, Charles Peoples III captivates with his beautiful wigs and pink dresses. We are mesmerized as he dances with charm and heat across the stage in glamorous rosy outfits. Pink explodes with unstoppable, dazzling energy. Peoples transforms LaGrone’s lyrical words into a glittering extravaganza.

Pink’s relation to her lover Ace (a nuanced R. Shawntez Jackson) flares up and turns tender from one moment to the next. Jackson’s heartfelt, profound portrayal signals that Ace is homophobic, but positively transamorous. He repeatedly insists to Pink: “I’m not gay.” But their chemistry is palpable.

When Bradford, the rich boy, keeps on visiting Pink in Oakland, we realize that Pink provokes him to negotiate parts of his own identity. An Oakland Black Panther, DeShawn (also R. Shawntez Jackson), teaches Bradford about his own history, advising him to “take off the mask” of assimilation and respectability.

Pink’s unapologetic glamour intrigues Bradford, while Pink sweetly protects the naïve visitor. However, Bradford’s presence in the neighborhood draws suspicion from local dealers–putting them both in danger.

In the audience, an East Bay woman in her forties sat up front and laughed heartily throughout the show. As we talked afterwards, she revealed that the “The Legend of Pink” is not entirely fictional. “Pink” is based on her life as a young trans woman. She recalled her time in the raucous West Oakland scene. She smiles brightly and chuckles, “I’m Pink, baby… and I’m still kicking.”

“The Legend of Pink” dazzles us with Pink’s unapologetic charm and transports us to the bygone essence of 1989 and 2007 Oakland. “Pink” speaks to both the hardship and resistance of the trans experience.  A Must See!