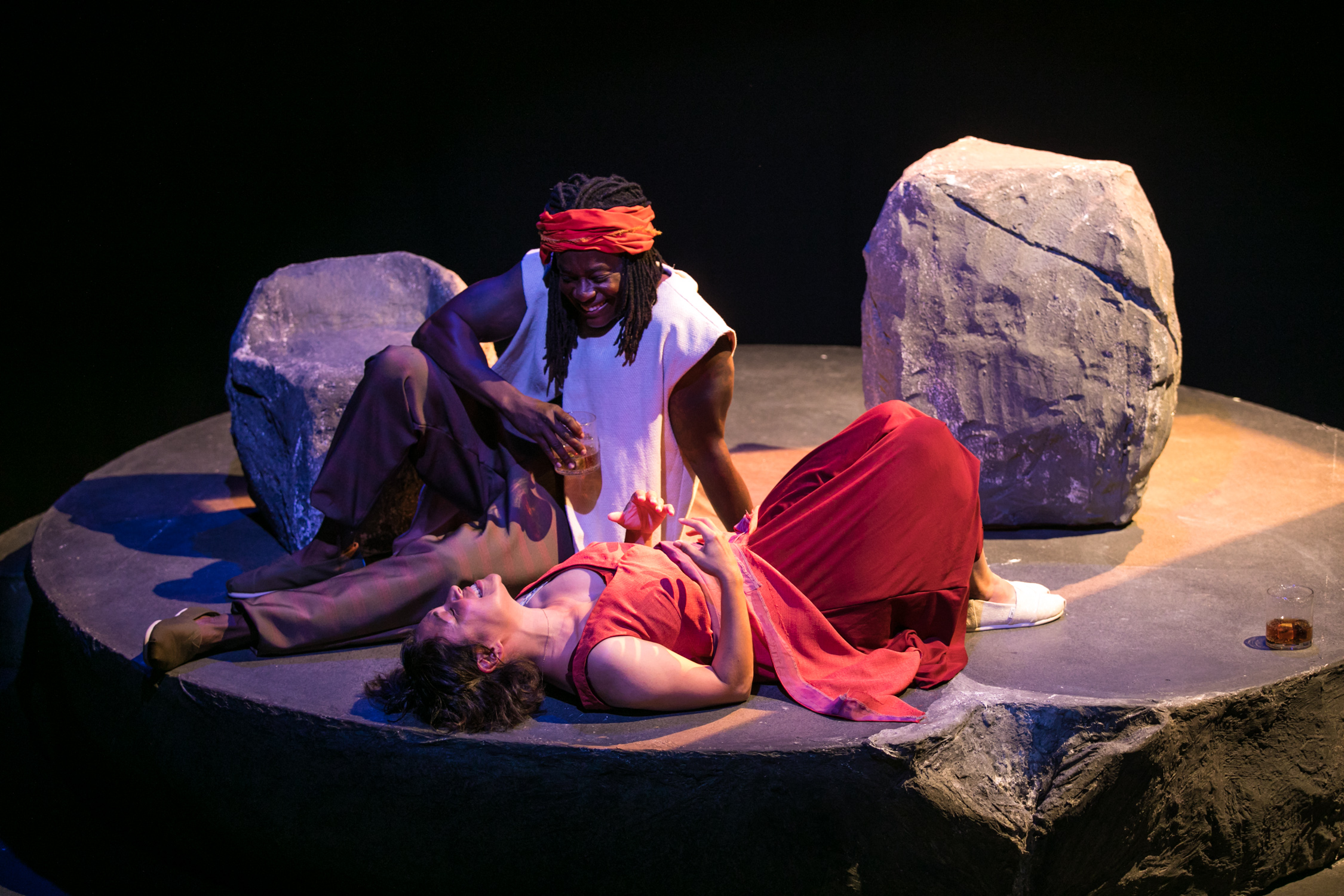 Christopher Chen’s “A Tale of Autumn” is a will-to-power story that takes corporate-state nihilism, bourgeois obliviousness, and the poverties and traumas suffered by those who stand in the way of ascendant tyranny, and shakes them gently. The result is a tightly constructed dystopian dramedy of manners.

The play’s core concern is the irreconcilability of greed and compassion. These forces are placed in centrifugal motion with each other through deft juxtapositions of scenes and sharp tonal contrasts, with results that range from hilarious to grimly ironic.

“A Tale of Autumn” is mainly concerned with late capitalism’s co-opting the practice of “Mindfulness” to boost productivity, compliance, and consumption. In the play, this recipe for social control is referred to as “The Way.” That ominous name should ring a bell for anyone who’s browsed the self-help section at a bookstore in recent years.

The play engages in actively selling us on “The Way” through a clever staging technique where many scenes echo those “big reveal” presentations put on by tech companies, with casually dressed big-shots gesticulating in front of huge screens.

The initating action is a corporate succession crisis. FarmCo, a food-provider company founded in a spirit of communitarian idealism, is becoming a capitalist behemoth bent on assuming the role of government to increase its profit. In other words, it’s fascist.

Fascism aestheticizes politics, a tendency embodied in most of Chen’s characters. Mariana (Mia Tagano), a FarmCo board member, tells us that “There is a kind of deliberate haze that I move through,” evoking the solipsistic, kick-the-can-down-the-road mentality of much middle management. And deluded citizen Gil (Shoresh Alaudini) asserts that “I live in the raging throes of The Way,” suggesting both the rapaciousness of a corporate state’s treatment of its citizens and the thrill many citizens feel to be part of its fever-dream of power.

The deceit and evil intent of “The Way” is obvious, but the characters deal with it in convoluted and self-destructive ways. “You’ll want to spin this as true,” says Mia in a particularly head-spinning gem, “but believe me, it’s not.” This is a particularly strong moment: in the midst of describing a threat against her daughter’s life, it’s as though “The Way” dissuades her from taking the threat seriously. The power-mad are always trying to convince us that our prison comes from within. “Mindfulness” offers the greedy a powerful tool to achieve a diversion of conscience.

“A Tale of Autumn” offers potent material, if somewhat broadly treated, with moments of high tension. The drama emerges from the opposition between greed and compassion, and it all culminates in this coup de grace: “There’s so much power in just being the thing that you are,” breezily concludes San (Nora el Samahy), the CEO who knew when it was just the right time to start murdering people.

I recommend this play for its smart staging techniques, and for its solid exposition; it wastes little time getting started, and the early scenes are strong. Yet I found the play fairly weak in its thematics and its critique of power. I noticed that it wasted considerable time and resources on a love-interest development between characters whose roles were weak in the first place.

“A Tale of Autumn” is a spirited showing from a playwright whose skills are oriented firmly towards far-sighted truth. For that reason alone, I felt glad to be in the space he’s created.”

“A Tale of Autumn” by Christopher Chen, directed by Mina Morita, by Crowded Fire Theater in San Francisco, through Saturday, October 7, 2017. Info: crowdedfire.org