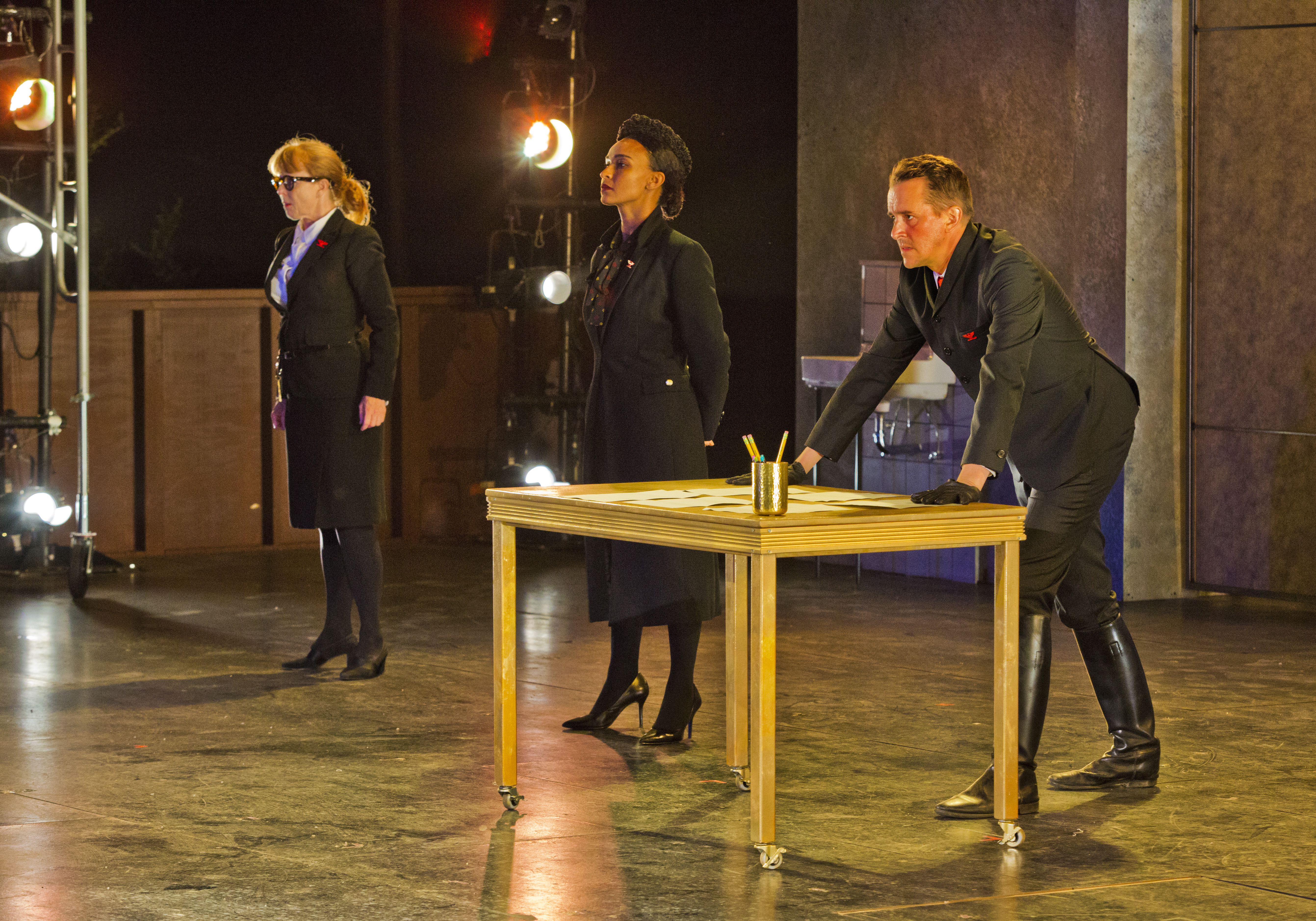 At the heart of Shakespeare’s dark comedy “Measure for Measure” lies the abuse of power and the question of virtue. It is impossible to watch this 400-year old play performed with skill and passion at Cal Shakes, and not think of the current President of the United States. The parallel does not stem from the female-heavy casting choices, the eclectic costumes, or the magnificent set, but from timeless issues of morality, truth, honor, and love. These are Shakespeare’s touchstones, and issues prevalent in our own political landscape since Donald Trump managed to be elected.

Director Tyne Rafaeli amplifies the conflicts of morality, honor, and love in her thought-provoking, powerful “Measure.” She walks a tightrope, balancing simultaneously between over-the-top and implied messages.

Angelo (tall, austere David Graham Jones) has just been given all the Duke’s powers. Duke Vincentio (quicksilver Rowan Vickers), who shifts from nervous nerd to mastermind leader like a juggler, has a secret plan to spy on Angelo and the people of Vienna, while posing as a humble Friar.

It is in this high-concept premise—a kind of Elizabethan sting operation—that the most direct connections to our own political dilemmas arise. Just before the Duke disappears anonymously into the crowd, he announces, “Hence shall we see / If power change purpose, what our seemers be.”

The new power, Angelo, dressed to resemble an SS officer, immediately decides to crack down on the “seemers,”that is, all of Vienna’s promiscuous citizens. His first victim? The unlucky Claudio (convincing Kevin Matthew Reyes), who knocks up his girlfriend and must now, under Angelo’s oppressive regime, die for the sin.

Isabella approaches Angelo to beg for her brother’s life. And she does it with the eloquence and might of Scheherazade: “O, it is excellent to have a giant’s strength; but it is tyrannous to use it like a giant.”  Angelo, a lover of purity and virtue, falls instantly and ridiculously in love with her.

Angelo comes up with “The Deal”:  Claudio can live if Isabel sleeps with him. When moral powerhouse Isabella threatens to “tell the world,” he simply asks, “Who will believe thee?” Is this not the same line America fed the dozens of women who came forward to accuse Donald Trump of sexual assault?  And, not to spoil the plot, but guess what? Angelo is lying about “The Deal,” too!

If it all sounds heavy for a comedy, there are plenty of laughs. One highlight is when Bohemian Barnadine (hilarious, multi-faceted Annie Worden) shocks us by leaping out of her prison cell in dirty underwear, refusing to be executed. She’s too sleepy, too drunk, and too combative to die.  Turns out, there is power, too, in pure personality.

Everything plays out in a stunning set serves, miraculously, as a state house, a prison, a convent, and a red-light district. The music is spot-on throughout, big at times and emotive too, just like the themes.

We always say we should learn from history, but we rarely do. In fact, quite the opposite. But if you want a philosophical and comical gem from the past, reinvigorated by Cal Shakes, “Measure” fits the bill. This production is thought-provoking, stylish, expertly performed and thoroughly entertaining.

Cal Shakes “Measure” leaves us with a daunting question that persists through the ages.  If it’s always death for death, haste for haste, leisure for leisure, bomb for bomb, rocket man for dotard, and measure still for measure, then what is ever going to change? Cal Shakes “Measure” finds a way to question and shake our core beliefs.