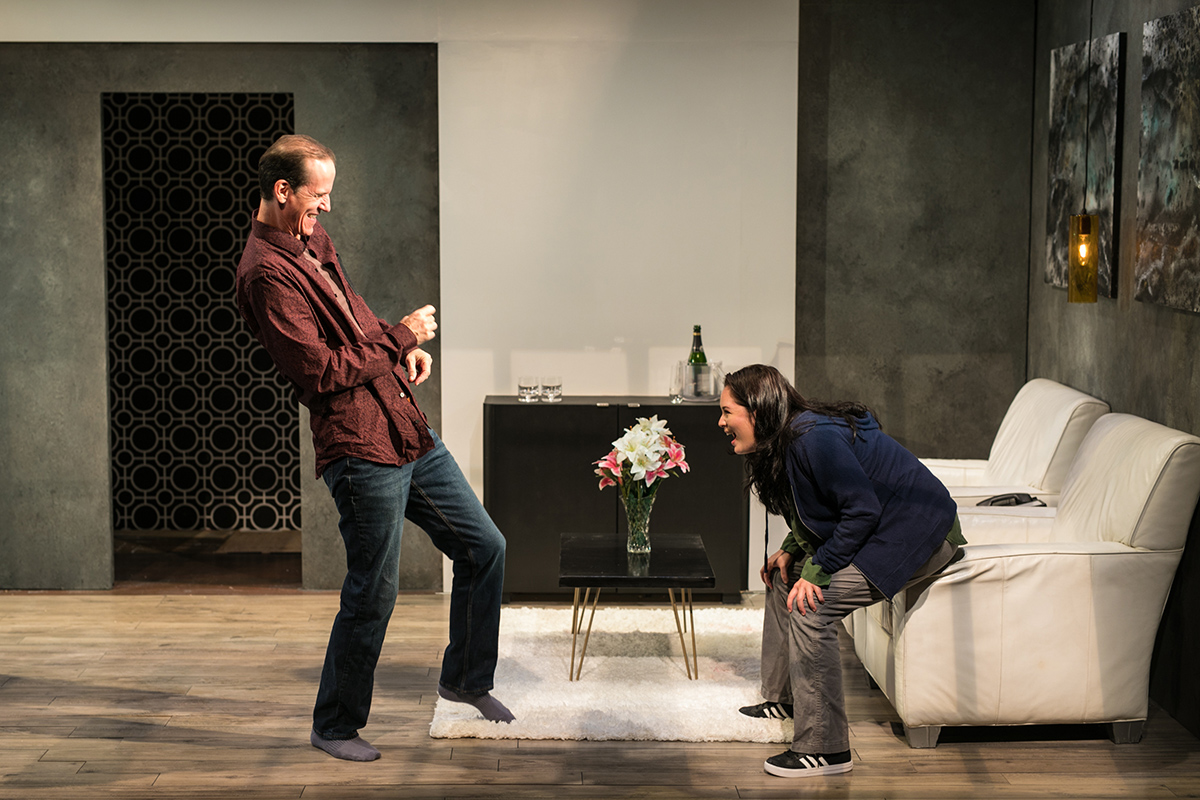 “Blasted” begins in a pristine hotel room in Leeds, England, but it does not stay immaculate for long. The stark, modern room begins a slow descent into hell: a mess on the floor, clothes hastily thrown about, worse to come. When the hotel room crumbles, the “Home Front” becomes a War Zone, a no man’s land.

Thanks to the inventive, intriguing set designs of Nina Ball, we see the set shifting its shape. The most startling changes come during brief blackouts, accompanied by shocking sound effects that ring in our ears. The looming forces of the ongoing, intrusive Bosnian Genocide of the 90s force their way into Sarah Kane’s 1995 cataclysmic drama. Designer Nina Ball evokes sudden and meaningless destruction, taking us to poetic pictorial heights. The set alone and its decay make Kane’s play worth seeing. Sarah Kane committed suicide in 1999, marking her brief and comet-like career.

“Blasted” succeeds in making us squirm in our seats. Nearly every scene shocks at least one of our senses: piercing screams, sudden death, thunderous rain, horrible rape, and deafening gunshots. At first these surprises provoke feelings and thoughts, but they happen so often that I came to expect them. “Blasted” makes up for that expectation by escalating to even more brutal shocks. All three actors give dynamite performances, working together like familiar old lovers—or enemies.

When Cate (explosive Adrienne Kaori Walters) turns up in the bare hotel room with Ian (dynamic, mercurial Robert Parsons), they clearly have a sexual history together. Their awkward meeting verges on violence. Are Cate’s outbursts deep sobs or laughter? It’s up to us to figure that out. Despite this initial confusion, Walters’ piercing scream gives me a heart-rending chill, and causes others to jump in their seats. She seems like a waif, lost in this male, war-weary world.

As Ian, Robert Parsons stands out as a foul-mouthed, abusive journalist, hardened to the suffering of civilians. Ian despises everyone, from minorities to homosexuals to soccer hooligans, all with the same burning rage. Parsons powerfully conveys Ian’s conflicting  emotions: he fears an assassin’s bullet, while he drinks and smokes himself to an early grave with dark glee. Ian speaks to our irrational and cynical prejudices, siding with death. Director Jon Tracy choreographs the actors’ movements with a clear-eyed smoothness and inevitabilty.

As the fully-armed Soldier who suddenly appears, the tormented Joe Estlack embodies the horrors of war in one machine gun toting military man.  The Soldier descends out of the sky from the Serbian War, in which the UK and US played a big part.

We are invited to both sympathize with and fear the Soldier, who could be us at any moment with the right conditions. Ian, the degraded journalist, represents a sophisticated Soldier, because he belongs to a higher echelon of killers.

The play boasts about lacking an intermission, which proves to be a mixed blessing. On one hand, the play is a non-stop roller coaster. But I could feel it in my lower back around the hour and a half mark.

A note about the content: “Blasted” has been described as “utterly relentless.” Rape hovers as a threat, as an act, and as backdrop. No one is left untouched by violence in Kane’s vision of Western sexual abuse and military guilt. This trip to the theater goes well beyond escapism: it’s a trip to the front lines.

“Blasted” shows us that reason fails in the face of war, while thousands of people are caught in the crossfire.

“Blasted” links personal violence against a woman to the mass violence that leads to “genocide” and “war crimes.” Kane joins the private to the public, in astonishing juxtaposition. Individual and international brutality mix and explode, so that we must think about their common sources.  Sarah Kane shows that no place or people can protect themselves from savagery. Here’s a unique play that dares to “Bring the War Home.”