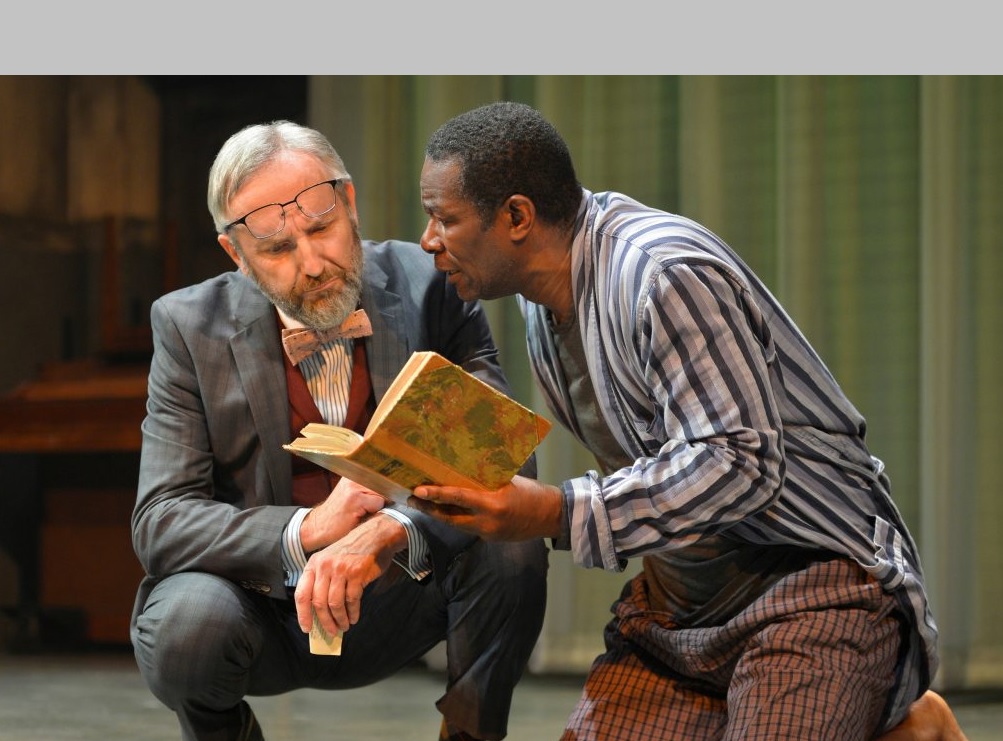 Hamlet presents a huge challenge to actors, directors, and designers: Shall we go with the full text? Shall we use modern costumes? Should Hamlet be a confused adolescent or a philosopher? Does Hamlet have a plan? Does he love Ophelia? All these questions loom over Director Carey Perloff’s monumental and technically letter-perfect production, featuring the formidable talents of John Douglas Thompson, at the top of his form and a master of his craft. As Hamlet, Thompson gives us the music and the details we crave.

This Hamlet unfolds in an immense abandoned factory, a challenge to absorb and describe because it hovers over the actors, making their every move a mystery and a challenge. The high, looming grey concrete walls of the crumbling industrial site soar up to the sky. The ominous, decaying walls signal an abandoned factory or slaughterhouse, complete with subterranean hideaways, mysterious bright lights, and an odd industrial shower.

There’s no explanation for the setting, but the actors are dwarfed, like lambs led to the slaughter in this factory of death. It’s quite chilling, and we wonder how Shakespeare’s characters can connect, so isolated from each other in this late capitalist ruin.

Most important, John Douglas Thompson makes a mature, meditative, and ambivalent Hamlet. Thompson’s Hamlet knows what’s going on, but he cannot share it with anyone. He is forced into isolation. Thompson brings forth a poetically ideal but trapped Hamlet, so separate from his family and friends that he can never bridge the gap between them.

Thompson’s Hamlet rolls out every word and phrase with perfect pitch and resonance—the words sound new and fresh. The powerful Thompson has been waiting for this role for a long time, and he makes a musical, musing Hamlet to remember.

Among those with whom his communication breaks down, first comes his Mom, Gertrude. Dominique Lozano, in a stunning emerald green gown, makes a most beautiful and bewitching Gertrude. Her grace, her lowered eyelids, her noble neck—all bespeak Gertrude’s self-indulgence, her beauty, her self-containment.

Lozano makes a most elegant and fetching Queen. You have to watch her move onstage to appreciate the depth and wit she brings to the role. Hamlet’s bedroom scene with Gertrude harnesses the hypnotic powers of Thompson and Lozano, as they they face outward, still making intimate, powerful contact.

Hamlet falls out of tune with his old friend Horatio (subtle Anthony Fusco), who tries to be a moderating force on Hamlet. Fusco’s Horatio takes on a philosopher’s role, diffidently following, but unable to help his friend.

Rosencrantz and Guildenstern (Teddy Spencer and Vincent J. Randazzo) turn out to be truly slimy and Machiavellian school chums for Hamlet. Together they lurk and scheme deliciously and comically, fooling only themselves. The two create humor in several roles, including Gravedigger and Priest, always spot-on.

Dan Hiatt does yeoman work as Polonius, who has a penchant for bow ties and spiffy, dated suits. Polonius’ frustrations are palpable—no one pays much attention to him, so he keeps on prattling and evoking ridicule.

His daughter Ophelia (delicate Rivka Borek) pulls off a tour de force, making us feel more for her than almost anyone on stage—she mistakes her father’s ties for flowers and herbs in her delusion. Light as feather, in pastel lingerie, she evokes an injured bird.

Other scenes are more disjoint—Claudius (Steven Anthony Jones) lives in his own world, and talks to hear himself only, but he’s not very convincing as a villain. No one believes Claudius—he’s the scary Dad who has to be humored. However, as the Ghost of Old Hamlet, he is imposing.

When Claudius conspires with Laertes (bold Teagle F. Bourgere), Laertes stumbles too easily into Claudius’ schemes. Sometimes, the actors seem to be in separate bubbles that keep them from contacting each other. The sterile factory oppresses them all–is it late capitalism or the approach of war?

With such a lyrical and accomplished cast, we want to perceive Perloff’s vision, but we are left in doubt. When Jomar Tagatac comes on as Fortinbras, to survey the dead bodies, we get a chill. Fortinbras’ elegant military entrance, draped in camel’s hair coat, signals a new man. Tagatac, striding, grips us with fear and hope. simultaneously. He could be ruthless or reasonable. Like the play and its setting, he remains a beautiful, suggestive enigma.