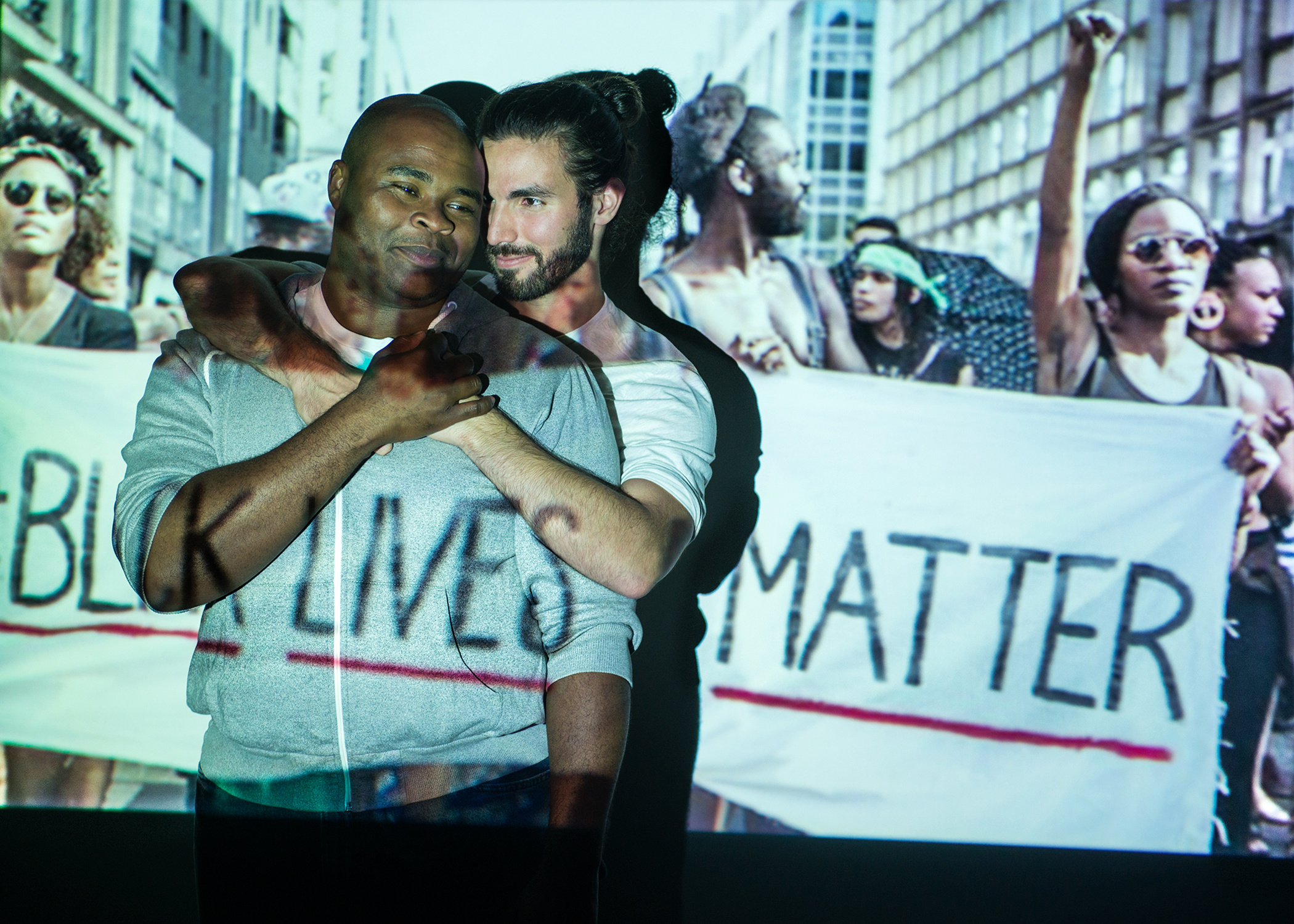 At last a play that treats gay lovers like other lovers, exposing their virtues and faults. In “This Bitter Earth,” Jesse and Nick share love, debate issues, and conquer fear. “This Bitter Earth” puts a Black writer and his activist lover front and center, as they face personal and political issues as blossoming partners. Playwright Harrison David Rivers has put his smart, young black and white couple from Minnesota at the cutting edge of our fears and hopes.

It’s hard to resist the charm of Jesse Howard, played by consummate actor, H. Adam Harris, whose emotions run from anger and self-righteousness, to charm and seduction. Harris could be a whole play on his own because he keeps us on the edge of our seats. His precise emotional highs and lows grab our hearts, even as he resists his lover, ridiculing the white boy’s passion for Black Lives Matter.

In this two man play, we easily fall in love with his militant activist boyfriend named Neil Finley-Darden, played by the wholesome and winning Michael Hanna. Hanna comes at the role with delicious enthusiasm and vigor. He gives as good as he gets from Jesse, his cynical partner. Hanna admirably withstands Jesse’s attacks on his privileged upbringing, on his militancy, and on his political passions. The humor flows between them, each making fun of the other. We love to feel the poetry of their passion.

This Jesse and this Neil become a loving couple. Although they disagree most of the time, they also show us the depth of their feelings in sensual, sexy scenes. Together, Harris and Hanna fill the stage with joy, ideas, and assertiveness: a delightful pair of divided lovers.

When the professorial playwright Jesse first sees Neil on a podium with a bullhorn, speaking at a Black Lives Matter rally, he falls for the extroverted, long-haired white boy. Jesse is thrilled to hear the words of Essex Hemphill, the 80s poet and activist, fall from Neil’s lips:

The lives of Black men

And can be saved.

Essex Hemphill’s poem draws them together, leading them to demand more of themselves and their country. In his poem “For My Own Protection,” (1992, Ceremonies) Hemphill asks us to protest against the injustice and inequality of the prison-industrial complex. Neil takes the challenge  and makes BLM his life; but Jesse holds back from Neil’s activism. We feel the push and pull of their love as issues escalate.

Jesse and Neil argue and struggle during the terrible murders of Trayvon Martin in Florida; Michael Brown in Ferguson, Missouri; Freddie Gray in Baltimore; the Charleston mass murder in Church; and finally, the Jamar Clark police shooting in their own city, Minneapolis. Playwright Rivers’ sweet and sexy couple cannot agree on political tactics. Jesse stews as the quiet writer and teacher; while Neil flares up— fiery, seductive militant in the streets.

The quick pacing and the striking blackouts take us back and forth in time, illuminating their conflicts and their compassion: they are a joy to watch. Under the deft direction of NCTC Artistic Director, Ed Decker, both actors weave an irresistible web. Their mixture of passion and politics explodes into sexual and intellectual desire for a better life. Rapid-fire events keep us engaged and thinking, every moment.

For a long time, I have been waiting for a play that unifies personal desires and political action—well, here it is. Decker, in his wisdom, has nurtured a young playwright, Rivers; and then worked in Minneapolis and San Francisco to bring these two strong and deeply connected actors, Harris and Hanna, into sharp focus. They feel like old friends, and the random tragedy that echoes through “This Bitter Earth” evokes a wider consciousness for all of us.

Here is a play that has at its center, the work of a great and growing icon of the BLM movement, the poet Essex Hempill, and his poem “For My Own Protection,” which ends:

All I want to know

For my own protection

Is are we capable

Rivers’ play, itself, becomes a tone poem about Jesse and Neil’s love and their militancy, conflict, and passion. “This Bitter Earth” makes us think about others, and imbues us with a new drive to make change. Their love and its sudden ending lets us know that the time is short, that only the present exists.