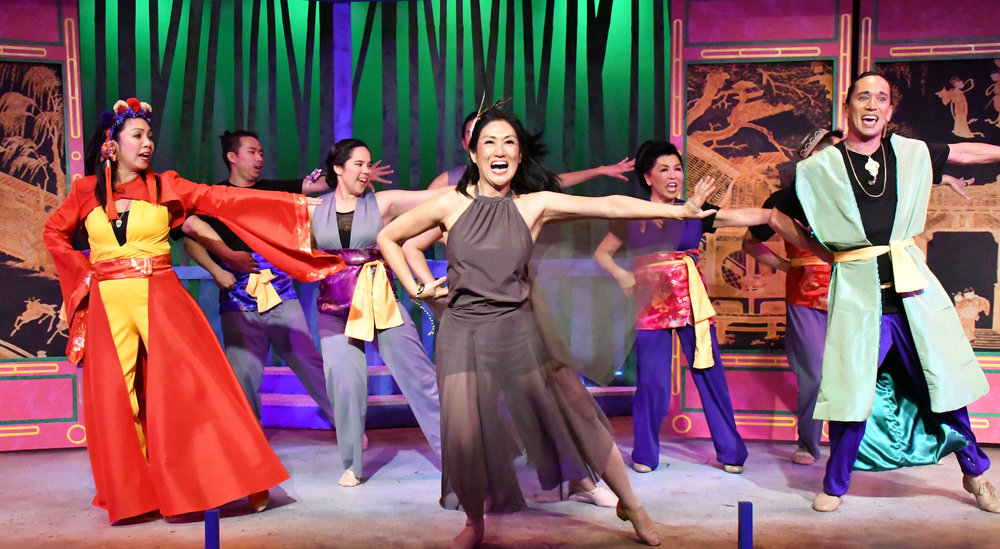 Set in Ancient China but with its feet firmly planted in the present, Min Kahng’s musical adaptation of the Hans Christian Andersen fairy tale “The Nightingale” takes wing at Town Hall Theatre. Kahng’s infectious music harmonizes perfectly with the exuberant cast, making a light and carefree musical mood. Kids and their parents will be enthralled by the brilliant designs and the fast pace.

Town Hall Theatre brings diversity to Lafayette with a largely Asian cast reminding us of Disney films, like Mulan and Moana. The singing and dancing are superb. Playwright Kahng fulfills his dream of making more roles for Asian actors. High praise to Musical Director Margaret Halbig for bringing us the vibrant tunes.

Poor fisher girl Mei Lin (irrepressible Isabel To) opens the show with a hopeful song. She longs to leave peasant life behind, and become a lady of the court. She is pursued by painfully shy Xiao Hai (charming Matt Ono) who hesitates to express his feelings, when he is faced with her startling ambition.

But Mei Lin’s hopes are overshadowed by the oppressive, egocentric Emperor (brilliant DC Scarpelli), whose incompetence threatens to bring down the Empire. The Emperor remains out of touch with his subjects, throwing banquet after banquet so that his people are starving, while he basks in luxury. We see the parallels to present day despots—foreign and home-grown.

The Emperor is oblivious to anything but his own pleasure. His life is controlled by fawning fashion designer Bing Wei (entertaining Ted V. Bigornia), who intends to make each banquet more lavish than the last. Only the Emperor’s long-suffering sister Madame Wu (Lisa Woo) can hold his kingdom together.

Each order for more fish strains the abilities of the fishermen, led by the diplomatic Head Fisher (accomplished Miyoko Sakatani). The Head Fisher’s complaints are criticized by her frustrated son Xiao Hai, who encourages the fishermen to revolt. Here is a fairy tale with a social message: “We’re fed up, and we won’t take it anymore!”

When the Emperor receives a letter from the Emperor of Japan asking about the wonderful bird he heard singing during his last visit, the Chinese ruler is confounded. Because the Emperor knows nothing about the nightingale, he sends hunters to find the elusive bird. But his lowly kitchen maid, Mei Lin, brings the bird to the palace and is rewarded by being made a lady of the court. The nightingale, wonderfully portrayed by Pauli N. Amornkul, dances gracefully to a flute and clarinet song, played beautifully by Daniel Warner.

The lyrical Nightingale Song contrasts with her plain, brown plumage. So, the Emperor quickly switches to the gaudy Fake Nightingale (hilarious Christopher Juan), dressed in gold. The Fake Nightingale looks strikingly like Kim Jong Un and dances Gangam syle—bringing roars from the crowd.

Even though the gray-haired audience thoroughly enjoyed the musical, it is even more fitting for a younger audience, who will thrill to the bright colors, the uplifting music, and the fast-paced action. The cast, well experienced in children’s theater, makes it a ball. Grab your kids and go. They will be enthralled by this classic tale of the triumph of love over greed and substance over style. Parents will appreciate the deeper social commentary about Trumpian politics.