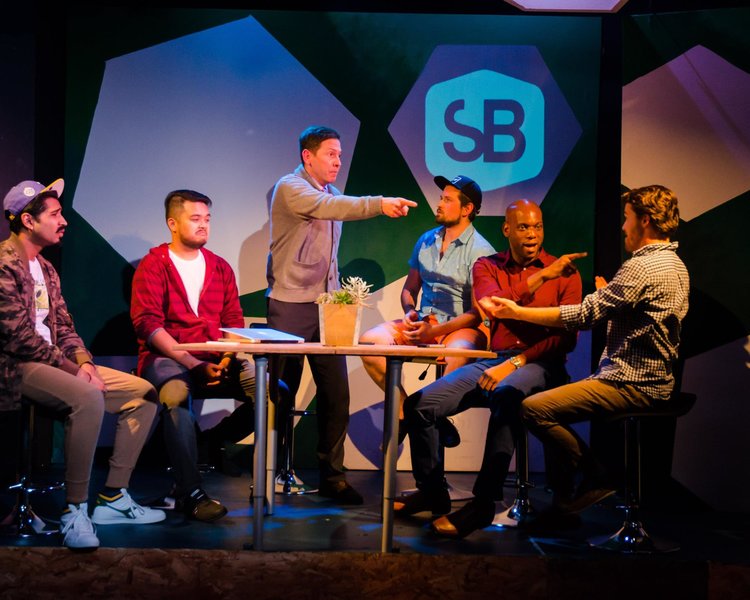 In “#bros” by Jake Jeppson, the Dudes spew hashtags and ideas in a rapid, edgy style, revealing their neediness and their nastiness. But they fly under the cover of being sensitive and considerate. At first, we think: Wow! Here’s some cool, smart tech guys trying to organize a new kind of male awareness. They talk fast, they have brilliant ideas for hashtags, like #SensitiveBros—but wait! they urge each other on with name-calling and shaming. They are funny but what’s going on here?

“#bros” starts out with a bang: First Dude (Brennan Pickman-Thoon) is mooning over the charming barista Girl (Megan Wicks), who gives him the decidedly cold shoulder. He retreats to his job at #Sensitive Bros website, where his good buds advise him how to deal with the rejecting Girl.

Of course, they give him the worst advice possible, and try to twist it into a money-making viral campaign. Director Rose Oser makes these Dudes pop and sizzle on the stage, and things move swiftly into dangerous sexual territory.

The Sensitive Bros turn out to be fast-talking techie dudes—called Head Dude, Some other Dude, Another Dude, Quiet Dude, and Dudest of the Dudes. They dress in styles from Boho to GQ—but they all must agree with Head Dude who runs the show with an iron hand.

Sure, they are hilarious, starting with Head Dude (shark-like Ryan Hayes), in a fashionable suit or sweater. Head Dude is ready to celebrate or criticize his homegrown Board of Dudes at #SB. He lies in wait and pounces when one of his Dudes has his own ideas. A pretense of equality quickly gives way to first friendly, then vicious put-downs. Beware of that Head Dude!

Head Dude treats Some Other Dude (sweet Heren Patel) as a mere-yes man, and takes control of him by making fun of his intelligence.  Head Dude buddies up to Dude (subtle Brennan Pickman-Thoon) when he tries to get close to Girl  (assertive Megan Wicks), asserting his mansplaining over his bud’s infatuation.

When Another Dude (lightning quick Derek Jones) tries to stand up to Head Dude, he feels trapped between his African American identity and fitting into the demands of what he slowly realizes is a hypocritical Dude mindset.  Another Dude figures out that Head Dude is really a bully in a neat suit. Jones gives a sharp and intriguing performance in a complex role, hitting it out of the park.

Dudest of the Dudes (subtle Kevin Glass) has no morals at all; he goes along with the boss and the winners, and is willing to throw his friends under the bus. This Dude will sell his Mom, if he can make a few bucks. Finally, Quiet Dude (charming Jonathan Villaluz) quietly considers his options. Will he refuse to go along with shaming his buddies? What happens to a thoughtful bro?

Of course, the heart of Sensitive Bros is the blossoming love affair between Girl and Dude because she has a mind and will of her own. She refuses to accept the so-called #Brocode, which demeans women. Her sex scene with Dude turns into a fiasco. Both are tied to gender roles that persistently destroy their connection. Girl has her own agenda, and she balks at being a plaything for #Bros.

Their love affair breeds hashtags and a bigger BROS Movement moves in on the so-called Sensitive Bros, putting their whole existence at the mercy of viral vituperation. It’s delicious to watch what happens when SB turns into #Just Coz. The greed that drives them shines from the multiple screens that depict the the viral public and private debates, brilliantly.

If you want to find out what is happening in the Techie BRO world, and what motivates them, be ready to have laughter served up lavishly by Faultline Theater, under the expert direction of Rose Oser. She knows how to stage a funny and revealing satire of where we are now.