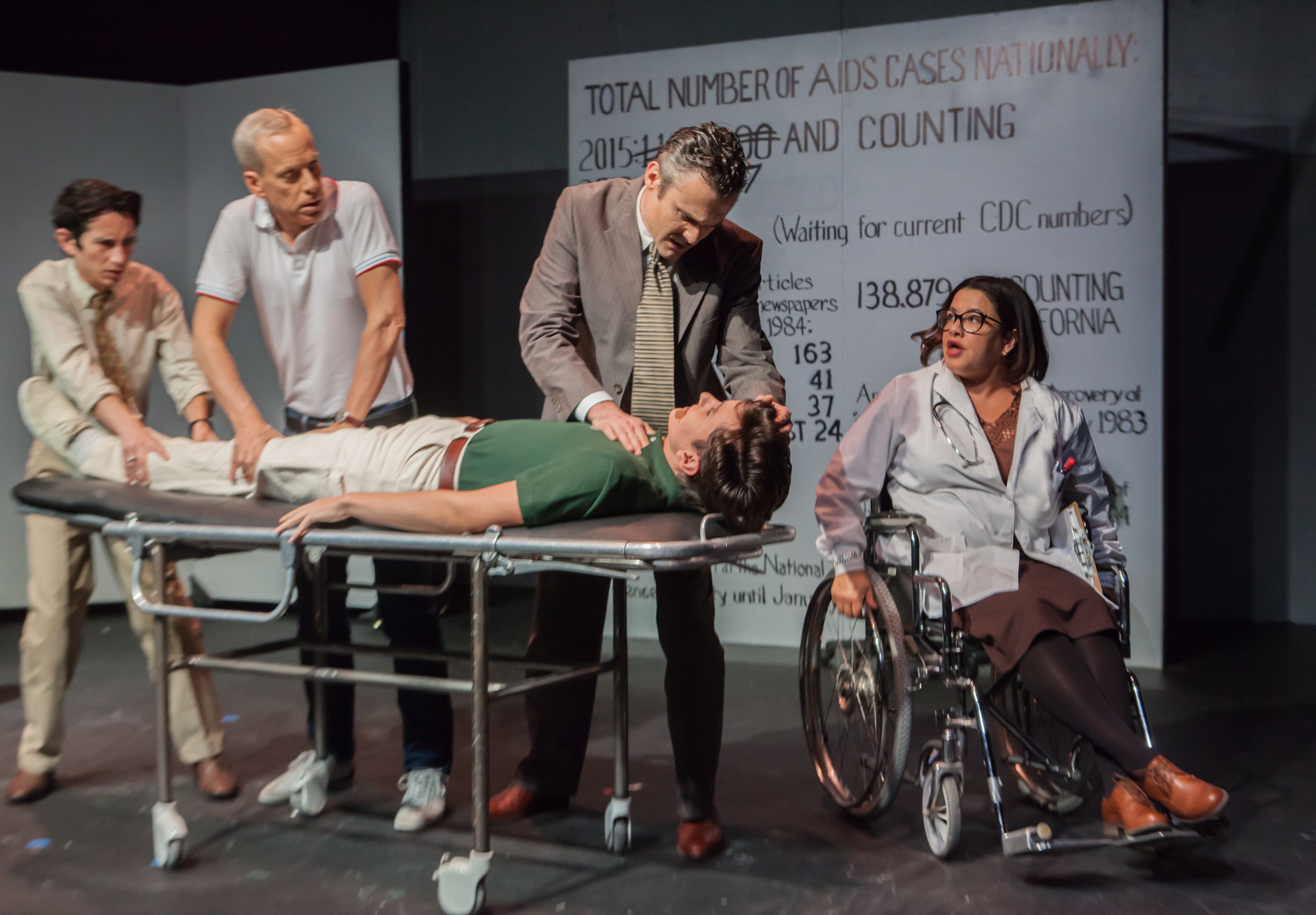 Theatre Rhinoceros’ “The Normal Heart” stirs us to challenge the silence and to demand accountability from the powerful. 36 years after the first AIDS crisis, that traumatic memory still has its lessons for us.

Director John Fisher’s “The Normal Heart” depicts the complex development of political resistance to HIV/AIDS, and ultimately, an existential struggle for the future of queer identity. Theatre Rhino reminds us that when silence is death, there is no choice but to speak up.

“The Normal Heart” opened in New York in 1985, running for 294 performances. Recent revivals led to HBO’s 2014 live-action adaptation, starring Mark Ruffalo and Julia Roberts. Kramer’s play, inspired by his own organizing at GMHC (Gay Men’s Health Clinic) and ACT-UP in the early 1980s, has an enormous role in the history of the HIV-AIDS crisis.

The production opens in a health clinic as Ned Weeks (John Fisher) accompanies his friend David (Jeremy Alan Howard), a pale and spot-covered young man, for testing. David emerges from the visitation room in a state of shock—he has the mysterious disease. Dr. Emma Brookner (Leticia Duarte) reveals that more than half of her patients with the unnamed disease have already died.

Kramer’s play shocks with its depiction of the terrifyingly quick deaths of otherwise healthy young people because of inaction by local and federal authorities. As the New York City mayor’s office and gay “leaders” turn a blind-eye to the crisis, Ned creates a new political action group, called ACT-UP.  ACT-UP runs an information hotline, visits the sick, and organizes radical demonstrations. For me, their organizing is deeply inspiring.

Bruce is polite to authorities and wants the organization to be professional. He embodies assimilation to the heteronormative. Ned, on the other hand, is vociferous, alienating, but ethical and brave. Ned clamors for political boldness and pride among his fellow organizers, envisioning a proud gay movement, but hampers his message with divisiveness and defensiveness in the face of criticism. Lives are at stake, with 40 deaths a week in New York, alone.

Overwhelmed by the tragic absurdity of so many deaths and the malicious inertia of Koch and Reagan, ACT-UP reaches a breaking point. Mickey (memorable and authentic Tim Garcia) undergoes a heart-wrenching breakdown. Tommy (funny, sincere Morgan Lange) brings much-needed humor and fresh air to the production. As Ned bombards the audience with statistics and tirades, he falls in love for the first time, with New York Times writer, Felix (Jeremy Cole).

At times, Kramer’s piece feels dated. Ned’s tirades sound elitist and chauvinist, today. The characters are exclusively white, gay, and middle-class; while today’s LGBTQIA+ movement has taken major strides towards diversity and inclusion. Kramer suggests that promiscuity is to blame for the crisis—that love is the solution. This binary is certainly simplistic.

Fisher’s production is significant and impassioned, thanks to the spot-on cast and excellent acting. At times, the dialogue still feels forced and the stage space cramped—opening night kinks, I think.

With the recent re-legitimization of homophobia and bigotry, Theatre Rhino has chosen to revive a 80s classic. This year, the President and Vice President have joked about “hanging” gay folks, the openly bigoted Judge Roy Moore of Alabama won a Senate primary, and violence against trans-women has spiked.  We need a new ACT-UP.

Surely there is much to be angry about. Since the start of the epidemic, more than 675,000 people have died of HIV/AIDS in the U.S. We must provide healthcare and solidarity for the millions who live with HIV around the world. We must always condemn politicians who sat idly by and even continue to block LGBTQIA+ rights.

Like protagonist Ned Weekly/Larry Kramer, we must channel our anger into productive, healing actions. Like Ned’s, our voices must go beyond the loud and divisive. We must become powerful, artistic, and unifying. And we can begin with vulnerability.

As Kramer says, “Don’t lose that anger. Just have a little more patience and forgiveness. For yourself as well.”