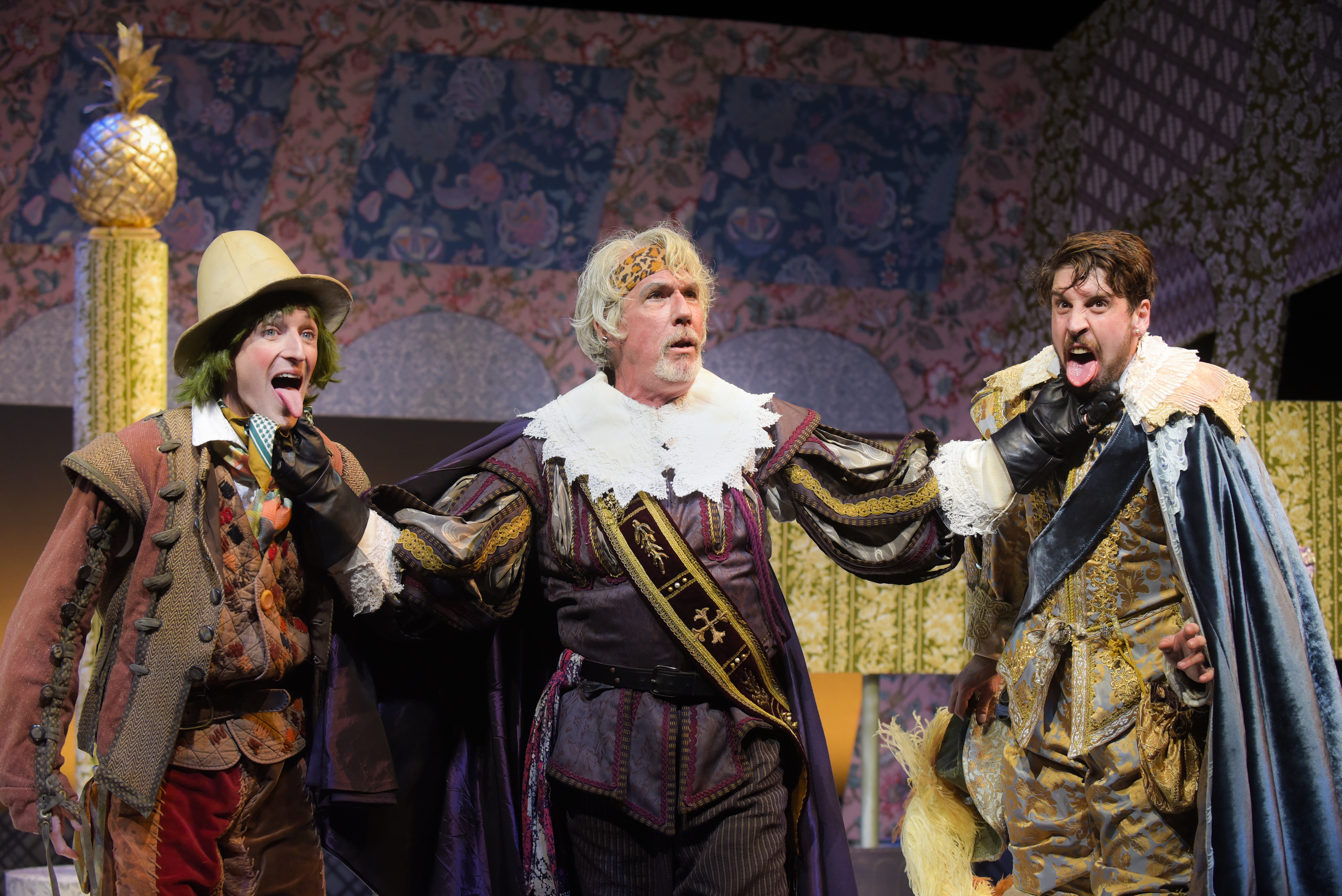 “The Liar” is a hoot!  This is a very good comedy that delights on many levels. The Lesher Center has scored another hit with a brilliant cast under the skillful guidance of Director Michael Butler. The liar is Dorante (irrepressible Jeremy Kahn), an incorrigible, mendacious Cavalier, newly arrived in Paris.  The liar hires the always truthful Cliton (exuberant Joseph Patrick O’Malley) as his servant who quickly becomes his confidant and accomplice in finding a woman. When Dorante spots Clarice (effervescent Sharon Rietkerk) and her shy friend Lucrece (winsome Lyndsy Kail) walking in the plaza, the chase is on.

Clarice is attended by identical twins Isabelle and Sabine (alternately puckish/stern Monique Hafen) who conspire with her. To add to the confusion, Isabelle flirts with Cliton while Sabine rejects him, leaving Cliton bewildered. Hafen is a delight in her dual roles and her sweet mastery of physical comedy.

We want to like Dorante as a lovable scoundrel but are put off by his inability to tell the truth. We believe that life would be simpler if he, like our POTUS, could only stop lying. The liar’s compulsion adds to the hilarity.

When Dorante’s father, Geronte (inimitable Howard Swain) tries to arrange a marriage, he is sabotaged by his son’s constant lies. Although the noble class has privileges, they are bound by conventions of marriage and courtship. Dorante is likable because he is rebels, and wants to find love on his own.

Victoria Livingston-Hall dresses the cavaliers in flamboyant velvet jackets and broad brimmed hats, with extravagant feathers, a continual delight. Not to be outdone, the ladies are decked out in beautiful full-length linen gowns, complete with bustles to match the glamorous men. In sharp contrast, the servants wear drab, disheveled clothes with unruly hair—the opposite of their wealthy employers. Special mention to Linda Nye for the wonderful men’s and women’s wigs.

Scenic Designer Eric Flatmo also mixes classic with modern. The walls are covered in tapestry, but they slant askew in a modern touch. Scene changes feature a few couches and leaning pillars. Sound Designer Cliff Carruthers uses rock and roll hits sung in French (think Supremes) as accompaniment.  In the Second Act, the cast plays electric guitars and a drum set for a few rock songs, plus an operatic aria to add to the incongruity.

Alcippe, Clarice’s buffoonish, likable boyfriend (versatile Craig Marker) and  his foppish, diplomatic friend Philiste (outstanding Teddy Spencer) prance about the stage with dandified gestures, striving comically to offer sense to the suitors. Butler has assembled a cast of consummate professionals who have created a comedic tour-de-force.