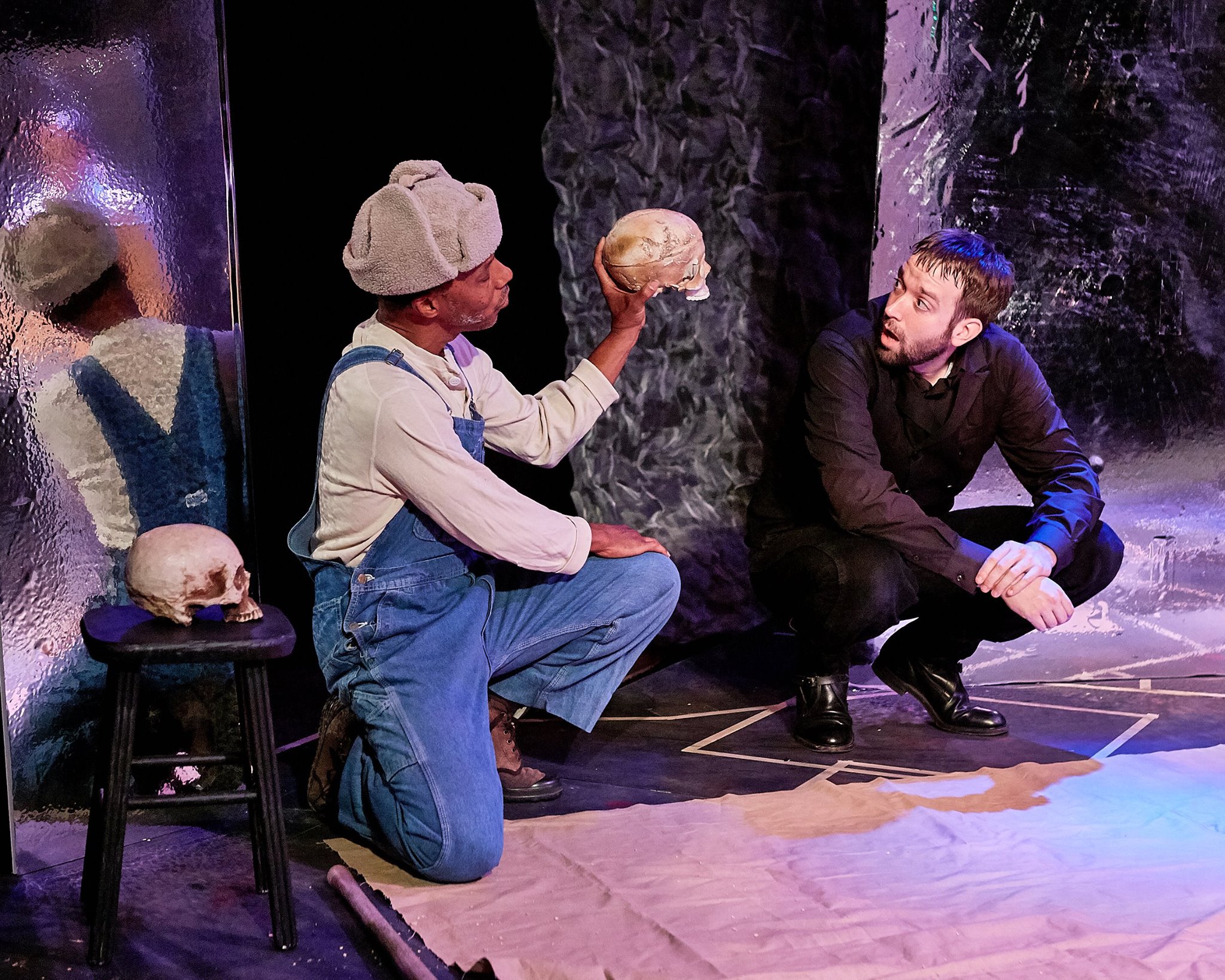 The Arabian Shakespeare Festival’s “Hamlet” comes with a modern political backstory of conquest and colonization. Director Kevin Hammond’s concept challenges us with an Arab Spring take on “Hamlet.” Hammond sees the Prince as a nationalist revolutionary, a fighter for justice against the corrupt Claudius. This interpretation rises to the surface occasionally, giving us food for thought. But the human drama of Hamlet comes to the fore, leading the charge.

Hammond challenges us with setting, concept, and structure. I walked into the “closet-sized” Royce Gallery Theater and found the stony towers of Elsinore in the grey puckered drapery. Black curtains make wings where actors enter and exit, denoting the play’s moral and political abyss.

Long silver shards of aluminum loom as the “castle battlements,” reflecting the characters in multiple mirrors around the tiny stage. The function of these mirrors unfolds as Hamlet confronts his father’s Ghost. Hamlet alone can see the Ghost straight on. Horatio and the guards see the apparition indirectly, through the mirrors. In other scenes, characters see their own souls in the mirrors. Kudos for the imaginative use of space and set, always an outstanding feature at Arabian Shakespeare.

The production defies conventional structure by introducing two Prologue scenes. When the lights come up on all the actors, Hamlet is instructing them. He is firmly in control, using words from the final scene:

Brown’s Hamlet guides us on a contemporary and historic journey. This Hamlet is ready to meet his fate, which he knows will lead to his own destruction. Only he can be the agent of change who will right the wrongs that have infected his court and country. He is the avenging angel who must scour the corruption around him.

When the Players appear, Hamlet instructs them how to act in his play, asserting his leadership.  William J. Brown’s Hamlet is active, decisive, and crafty, hardly the usual indecisive Prince. Brown gives us a surprisingly understated Hamlet in the early scenes, but picks up his energy and power in the mad scenes. When he denounces his mother Gertrude, he is full of power. He changes radically when he returns from England and is ready take down Claudius’s regime.

Kate Rose Reynolds shines as Horatio and in her other roles. She is clear, passionate and convincing, driving the action and supporting the decisions of her comrade, Hamlet. John Flanagan as Claudius, the Ghost, and the Player King shows a versatility and range. Flanagan’s Claudius catches my sympathy when he is trying to pray.

Critical scenes, soliloquies, and character development work well to bring us to the inevitable final scene of carnage. Although it comes up only twice, the play suggests that Hamlet has the people behind him. The brilliant choice of Arab Spring as the theme could be more emphasized for even greater impact.

Here is your chance to view a well-known classic from a perspective other than the Euro-focused “Hamlet”  that we read in college and see in American theaters. Arabian Shakespeare asks us to take a new perspective and I for one, enjoyed the ride.