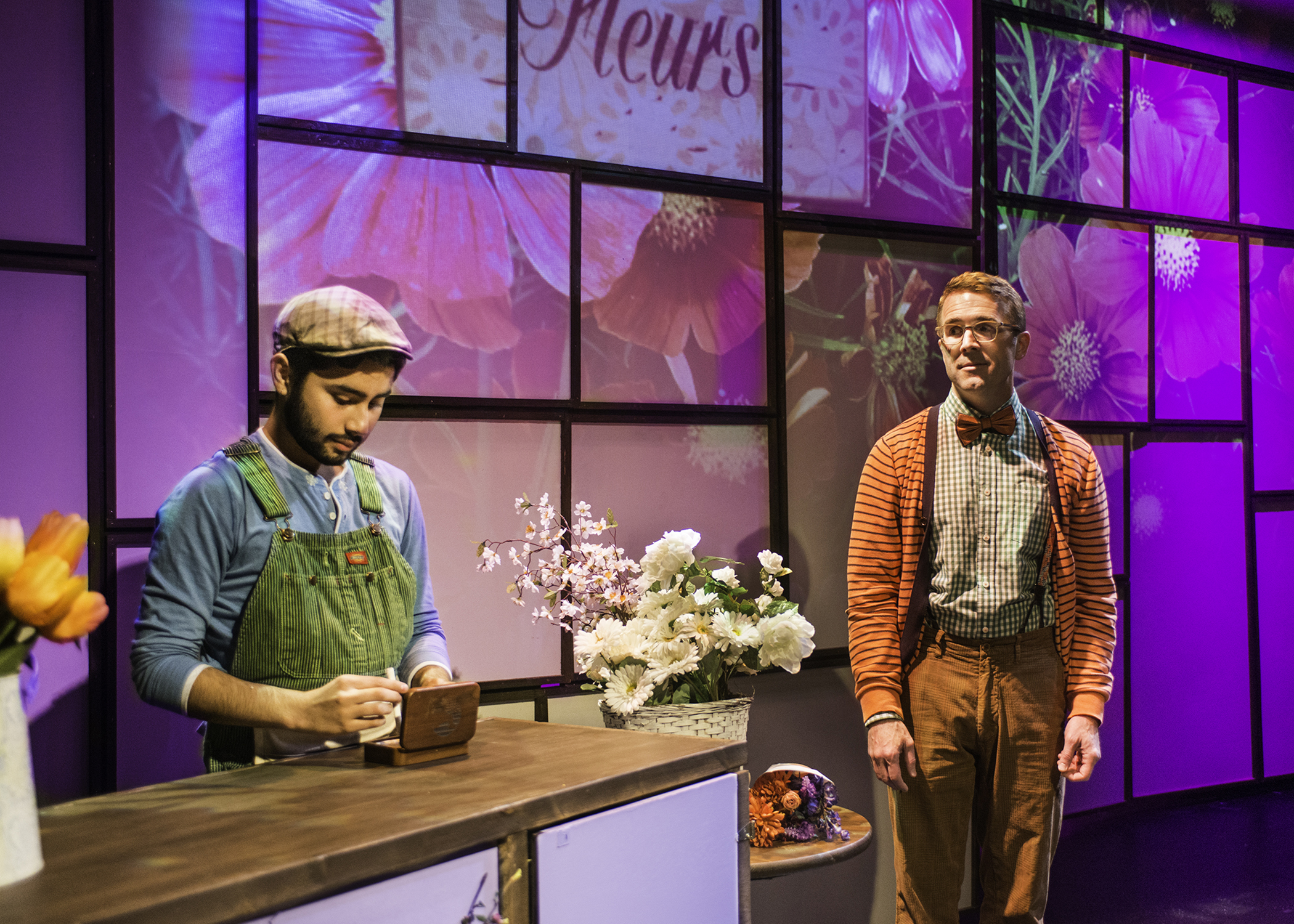 What a joy! A show about gay marriage that is funny, sweet, witty, and smart. And “Le Switch” covers two divergent cultures—French-Canadian and American, in Montreal and New York City. David, a New York City librarian dresses in cardigan sweaters and bow-ties, with strange color combos. He is averse to commitment and refuses to even consider getting married, so the advent of gay marriage means nothing to him.

David has a wonderful twin sister, Sarah (excruciatingly funny Nancy French) who also rejects marriage. David and Nancy make a witty pair of naysayers, who reject all “traditional” bonds. They are fun to be with—clever, cynical, and rebellious, each carving a niche for her/himself in rare books or fantasy games.

David never cuts the pages of the books he collects, and Sarah has a non-sexual marriage of convenience with Jamal, so he can get a green card. What happens to two such cut-off people, who live in their heads but not for their hearts?

Well, David has a super-gay friend, Zachary (lovable Brian J. Patterson), who has found love and marriage. Zachary insists on his Best Man wearing “pumpkin and aubergine” tones for the gay gay wedding. And Zachary is throwing a stylish Bachelor Party, not in New York, but in Montreal.

Zachary is a proud gay guy, with all the flair and flamboyance he can muster. He tries to humanize his dear old friend from high school, David, but it seems an impossible task—David remains uptight, ungenerous, and unfeeling. What’s a gay friend to do? Their interactions, as Zachary dresses David for the occasion are hilarious and priceless.

Zachary makes David his Best Man, dresses him up in the pastel palette, and insists he come to Montreal. Reluctantly, David gives in, but on the way to the bash, he stops in a flower shop, and runs into Benoit (irresistible Ryan Vasquez), the cutest gay florist ever!

Well, from that point on, the sliding projection screens behind them feature flowers bursting out, rather than bow ties. And we swim in the magnificent projections of Le Mont Royal, in the center of Montreal. Super-sweet Benoit shows David his lovely Quebecois city—et en francais! Who could resist such charms?

Well, up-tight David, the pedantic librarian can try. He can enlist his sister and his dear old friend and roomie Frank (brilliant, masterful Donald Currie), who took him in when he was crashing. If we all had friends like Frank, who survived decades of gay repression by demanding his rights, we would be OK, right?

But David holds on to his need to rebel, to react, and to retreat from “traditional” human contacts. He just refuses to get it together, even as Zachary and Sarah and Frank urge him on to love, to grab the moment, to embrace the gift of Benoit.

Each actor plays her/his role warmly, lovingly, and with style. Philip Dawkins play is a instant classic of romantic comedy mixed with psychological insight and warmth. When you leave the New Conservatory Theater Center after watching “Le Switch,” you feel like someone has flipped The Switch. The evening sky looks more inviting.

The superb sliding split-projection screens by Set Designer Sarah Phykitt, the costumes by Wes Crain, and the lighting by Sophia Craven make this a full package of beauty. The dialogue sparks and sings, thanks to Dawkins, and the heart takes an extra beat when you start making the switch to Montreal, le francais, and love Dawkins-style. “Le Switch,” with fast pacing by Director Tom Bruett, will warm the coolest heart.