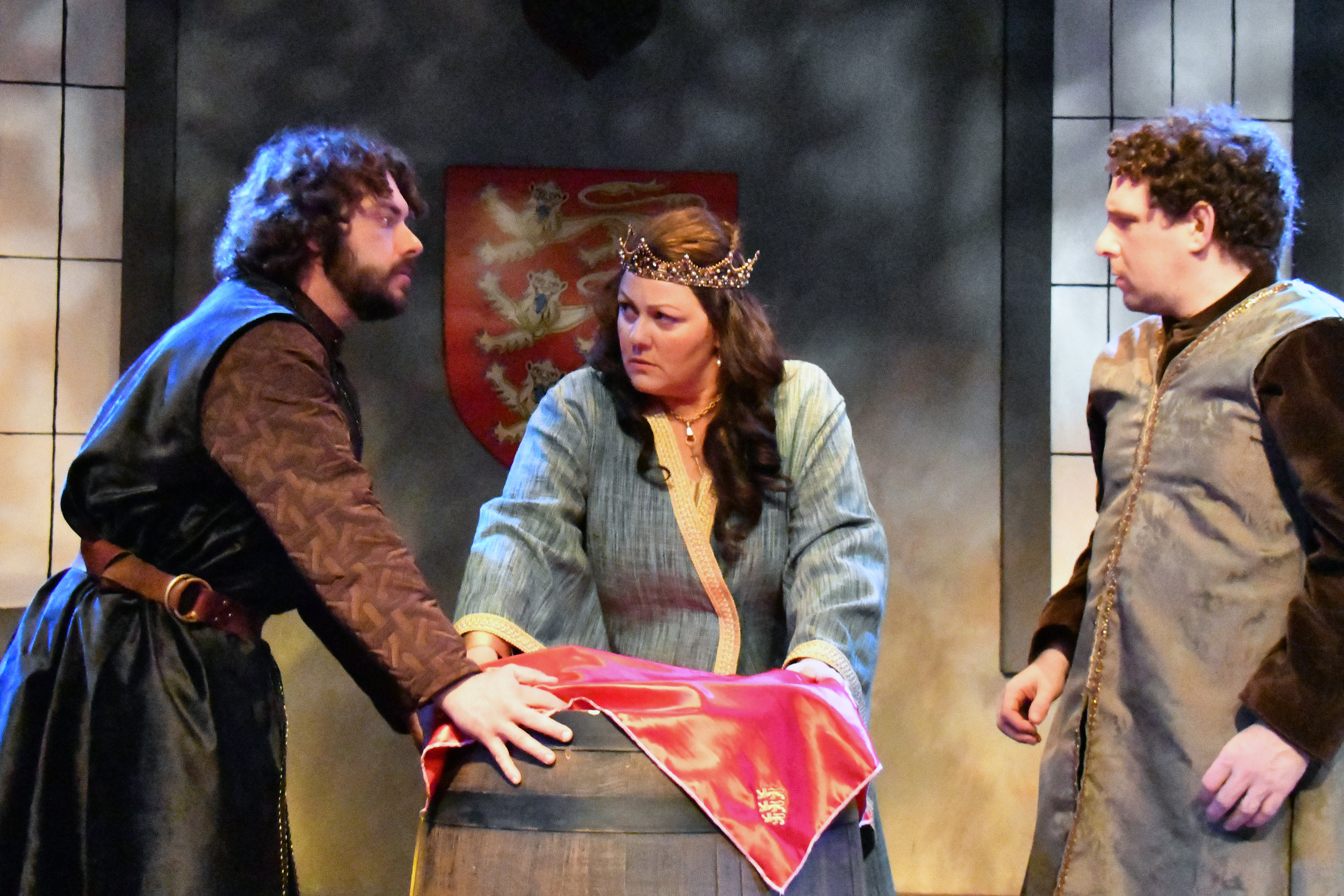 Every family has its ups and downs.

“The Lion in Winter” will feel familiar to anyone who goes home for the holidays. But a lot more fun. King Henry, played with bluster and charm by Steven Westdahl, and Eleanor, an equally manipulative and formidable Cat Luedtke, banter, spar and scheme, using their children as pawns as they vie for power and their own legacies.

As King of England in the 12th century, Henry II’s empire extends to large swaths of France. As he reaches the ripe old age of 50, he considers his succession plan. Henry wants to hold onto his vast holdings, while fending off challenges  from the king of France. He has three sons, each one wanting to be King.

But his wife, Eleanor of Aquitaine complicates matters. Henry has imprisoned Eleanor under house arrest for leading a revolt against him. Both monarchs have ideas of who should sit on the throne when Henry dies, and they go to great lengths to outmaneuver each other. Their bitter family quarrels make ours look like All in the Family.

James Goldman uses this royal backdrop to examine the pains of getting old. Henry wants his life’s work to continue to grow and thrive under the rule of his youngest son, even though John is immature and easily led. Henry also covets a younger woman, Alais, a French princess played with strength and resolve by Caitlin Evenson.

Eleanor, still Henry’s wife, is vainly fighting the ravages of time. While she still has feelings for Henry, she wants her own favored son, the brave warrior, Richard (the Lionheart) to become king. Their middle son, Geoffrey, is as conniving and self-serving as his parents. Geoffrey manipulates both of his brothers in a vain quest to become king, himself.

Having three children, I understand the bickering and backstabbing of the sons. Each of the three plays his family role to the hilt: Richard (Elliot Lieberman), the oldest, behaves as if the throne were his birthright. John (Luke Brady), the baby, spoiled by his father, is naive and a bit whiny. And Gregory (Kalon Thibodeaux), the overlooked middle child, works harder and sneakier to find his place at the table. Their family quarrels entertain us from start to finish. My son, Reilly, laughed a lot, all the way through.

In Sarah Phykitt’s set design, the action moves from courtyard to bedroom and from balcony to dungeon. The actors fill the space with their rapid-fire words and oversized, yet appropriate, emotions. Henry bellows and preens, yet he can also whisper sweet nothings to Alais to keep her faithful. Eleanor, larger than life, plays each of her sons off each other and Henry, while needling her younger replacement.

More than anything, “The Lion in Winter” is good fun. Historical plays are always best when you can connect to them. Even though “Lion” makes our family holiday squabbles pale in comparison, we still see ourselves in Henry and Eleanor’s passive-aggressive and backstabbing maneuvers. Great fun and insight for the whole family.