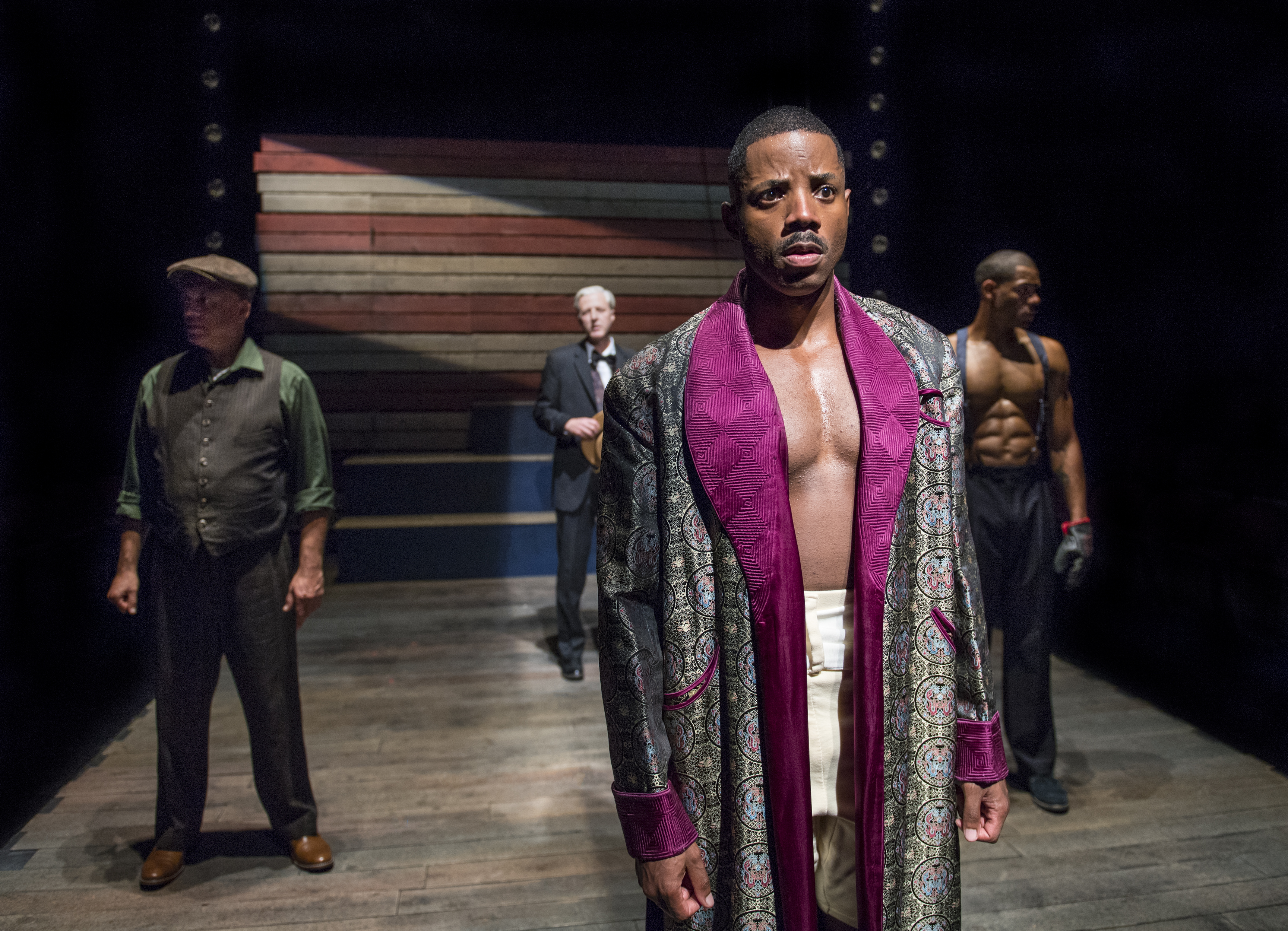 You have not seen a play like “The Royale” in a long time. Remember the punch of The Invisible Man, when the white southern country clubbers pit African American youngsters against each other in Ralph Ellison’s novel? They call it “The Royale” and the young men are forced to fight each other, brutally, to amuse the wealthy. Only one wins and he gets a few coins tossed at his feet.

It’s hard to say who suffers more—the losers or the so-called “winner.” That’s the story of Marco Ramirez’ boxing play—re-telling the tale of Jack Johnson, who became the first Black Heavyweight Champion in 1908. But Ramirez’ play is about the price that Johnson had to pay for being brave enough to contest the formerly white crown, and the cost to his family, his friends, and all African Americans.

As we know, these advances cost dearly—not just to the Jackie Robinsons and Jack Johnsons, but to thousands of others, toiling in their shadows. Martin Luther King, Jr. and Malcolm X and Rosa Parks represent just the tip of that iceberg. And a lot of planning and sacrifice and retribution flow from their choices. Director Darryl V. Jones stages “The Royale” with fast pacing, powerhouse punches, and smart staging. Jones connects with us, with every hit.

So, in “The Royale,” we have a true crowned king, Jay, played by note-perfect Calvin M. Thompson, who plays the Champ-to-Be with power, skill, and personality. Thompson captures the essence of bravery in a bye-gone U.S. time. He embodies the skill and the isolation of a hero to many, and a villain to others. Thompson’s Jay stands for workers, for women, for brotherhood in those bad times–and now, when Black Lives Matter.

In front of a wooden slatted wall, painted with a painful reminder of the delapidated Stars and Stripes, Jay Johnson fights with a giant leather punching bag, with a brilliant, younger, tightly wound challenger called Fish (impressive Satchel André), and a world that wants him to lose or die. The electricity is palpable, and we slowly get to understand what is going on behind the scenes.

No, they do not hit other, rather they spar with the harsh sounds and sights of the outside world, confronting us with slaps and bangs and dance moves that speak louder than boxing ever can. They have the moves, and they glide gracefully in boxing rhythms around Scenic Designer Richard Olmsted’s starkly beautiful stage set.

“The Royale,” a poetic docu-drama, uses stylized pugilism to represent the battle of early 20th Century America. Costume Designer Courtney Flores offers lavish and evocative American clothes to enrich the time, with startling changes of costume. Tim Kniffin plays Max, the white proprietor, who dares to book a black versus white fight, while he keeps an eagle eye on his profit and loss. It’s a business, he says, and he does no favors for his workers. He, too, gets to declaim his worthiness—at the top of his voice—in a superb spoken word style that grabs our attention.

Fish is lovable and strong, with a youngster’s hard, sleek body. Awed by Jay, he still wants to win, but he is doomed by inexperience—he could be a bit warmer and aware of his own weakness, but he worships his hero and wants to “take his shot.” We need to sympathize with the naive boy who faces Jay Johnson.

The other essential element in the ring, marked by bells and blows, is Jay’s manager and coach, Wynton (expressive, enthusiastic Donald E. Lacy, Jr.). Lacy’s Wynton, once a fighter, tries to protect his Jay—but the world is harsh to leaders and to their apostles, too. When Wynton takes the stage and explains his world, he blows us away.

The voice of the family and friends left behind comes from Jay’s sister Nina (formidable Atim Udoffia) who lets him know the price they are paying back in their southern town. Nina brings news of the ordinary people left behind, who want Jay to win, but have to pay in blood and beatings of their own. The march of liberation is dangerous, well before Martin and Malcolm. And the lynchings go on for decades.

Who wins such a fight? “The Royale” dramatizes, in stark sensational style, what it means to lead and to live out the struggle. “The Royale” crowns a winner, and the superb cast leaves us grasping for the truth behind the fight. We are engaged in it every moment, and the fight goes on.