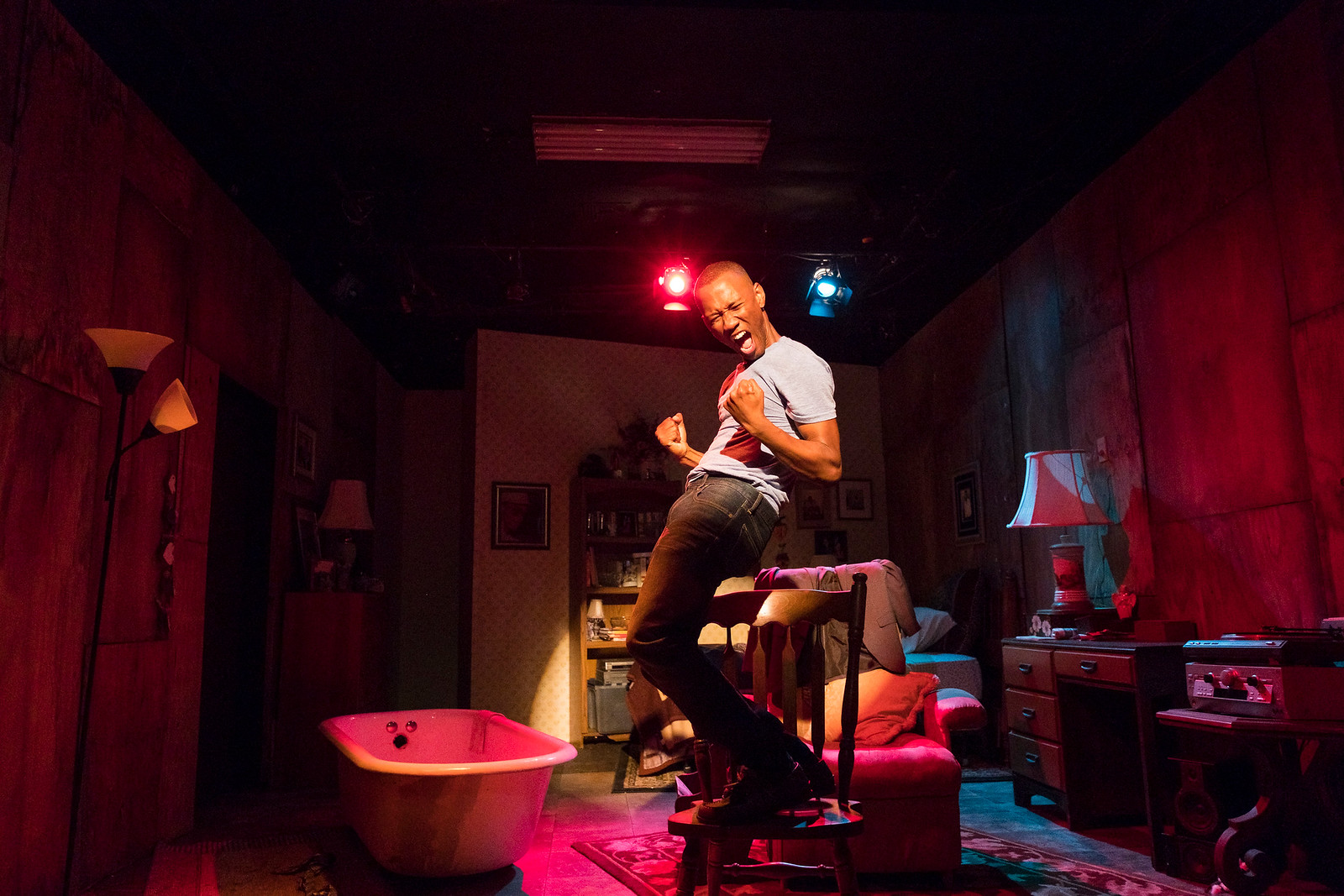 “Love is a Dirty Word” is a personal and vibrant portrayal of the transformation of a young black boy from the South who matures into his identity as a queer black man. Giovanni Adams, the writer and actor of this solo performance piece, brings an interesting community of characters to the stage at Z Below Space in San Francisco.

Facing continuous overt pressure to be someone he isn’t, Giovanni (Gio) learns to mask himself and his feelings in order to survive, but will he ever be able to show the world his true self?

Adams creates nuanced characters with exquisite specificity and honesty. As the character of Giovanni navigates his childhood through college and beyond, we discover that his life is marked by hardship caused by the incarceration of his father. He also faces rejection from his family and friends about who is he and how he expresses himself in the world. Although Gio doesn’t identify as queer as a youth, he’s called out for not being “manly” enough and is warned repeatedly to act more like the other boys.

Set in Jackson, Mississippi, the stage is comfortably and meticulously designed as the interior of a home with walls of plywood panels holding framed family photos. An easy chair, desk set, full bed, and bathtub depict specific spaces that have the genuine feel of a “home.”

In addition to playing himself, Adams also plays his parents and other family members and friends with a confidence and skill that make each character real. His transformations between characters are instantaneous and beautiful to watch.

The thing I love most about solo performance plays is watching the full breadth of an actor’s skills, and Adams does an excellent job of differentiating his characters to evoke a time, place, and a purpose. With a slight adjustment of posture and vocal tone, supporting characters like Giovanni’s grandfather, become multi-dimensional and easy to connect with in moments.

The mood of the play is very lyrical, with the initial monologue playing like a spoken word piece. Gio also sings his own songs, accompanied by guitarist Arturo Lopez.

My biggest struggle with this play was that I felt it focused more on tagging significant moments in Giovanni’s life, rather than exploring those moments deeply.

Giovanni’s character is often forced to put on a façade to avoid dealing with significant emotional trauma. No matter what is happening at home or in his heart, Gio hides it with a smile.

In some ways, I felt the play inadvertently uses the same tactic of avoidance to tip-toe around the deeper stories in the play. Just as Gio puts on a nice outfit and a toothy grin to cover his inner truth, the play withholds information about the story. He often avoids giving the characters an opportunity to respond directly to their challenges. In the most notable example, Giovanni’s character doesn’t realize he is gay until he’s in his 20s, yet we don’t see how this revelation changes how he sees the world.

When Giovanni goes from being a poor kid who is trying to fit in with a “gang” to being a student at Yale, we don’t know how he made that leap, or even what he’s studying at this prestigious institution.

Although I was intrigued by the story and the world that Adams creates, the songs slowed the narrative. Often, the songs reflect a feeling that Adams already portrays with greater effect just before the song starts.

Adams’ masterful transformations are the most powerful part of the performance, and I enjoy the glimpses of the world he creates. I would like to spend more time with the various story lines and characters, who have so much to say about rejection. Adams knows a lot about what it means to express oneself freely, and I would love the opportunity to really understand him. “Love is a Dirty Word” written and performed by Giovanni Adams, directed by Becca Wolff, by Tilted Field, at Z Below Space, San Francisco, through Sunday, November 26, 2017. Info: zspace.org