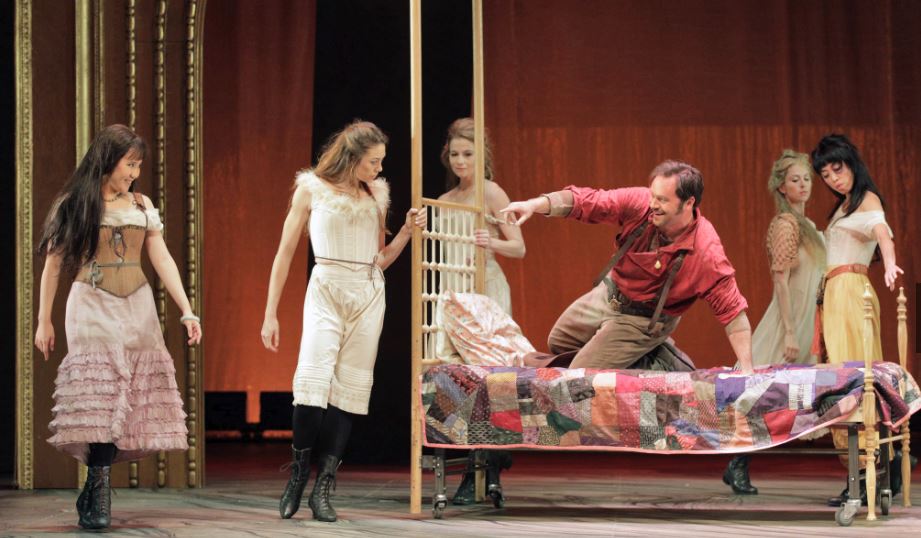 Why do I go to opera? For the same reason that tenor Andrea Bocelli does: “… because opera offers such deep sensations that they will remain in a heart for a lifetime.”

You have to wait till Act Two before dramatic conflict emerges, and then there is too much of it. While celebrating the Fourth of July, drunken miners decide to throw out all Mexican, Chilean, and Chinese workers. During the melee, one of the miners attempts to rape Josepha Segovia (the impressive mezzo J’Nai Bridges). She stabs him fatally. The mob sentences her to an immediate hanging in a trumped-up trial. Dances and subplots interrupt this plot trajectory, unfortunately, and the music does little to provide thematic continuity or interest.

A huge redwood stump center stage reminds us of the environmental despoliation of the era. Independence Day revelers dance upon the lifeless stump, while violent racism, sexism, and murder remind us of a bitter irony: the freedom celebrated applies only to white Anglo-Saxon men. Adams’ driving but dull music doesn’t do this shame justice, and the diffuse libretto loses focus.

The opera’s connecting tissue is a series of letters penned by Louise Clappe (aka “Dame Shirley”) as she accompanies her physician husband to and from Rich Bar, a gold camp on the Feather River. Here is a typical extract that illustrates the central problem of the libretto. Soprano Julia Bullock (magnificent as Dame Shirley) sings it in Act One. She is on stage in front of a huge projection of a Native American woman and sings about meeting “miserable people” grinding acorns and grasshoppers for bread. One of them particularly strikes her:

… a girl of sixteen perhaps: with those large, magnificently lustrous, yet soft eyes, so common in novels, so rare in real life. She wore a cotton chemise, disgustingly dirty, I must confess … She sat upon the ground, with her pretty brown fingers languidly interlaced above her knee “round as a period.” And she smiled up into my face as if we were the dearest of friends.                                          (sung letter of Louise Clappe)

Lovely prose. Stimulating to the imagination. Interesting. But does it sing? Does it deserve music? And wouldn’t you like to see this scene, not just hear about it in front of a projection? Where is that amazing knee? Where is the encounter? This is art song, not opera. My disappointment in this scene was repeated in several similar, undramatized interludes that pepper the work.

In the musical arena, Adams’ predominant technique is to spike irregular speech accents with percussive effects. The resulting texture grows wearisome long before the 3.5 hour opera ends, and is not suitable for depicting scenes calling for tender emotions. Dame Shirley sings the only memorable music, in closing the opera with incongruous paean to the beauty of the Sierra.

Issues of libretto and score aside, I was impressed by other aspects of the production. Davóne Tines lends his marvelous bass-baritone to the role of Ned, a fugitive slave who loves Shakespeare. Elliot Madore adds as much passion as possible, despite the dry music, as Josepha’s lover Ramón. Ryan McKinny and Paul Appleby make fine hard-luck miners. And Grant Gershon conducts a superb orchestra that highlights Adams’ technical niceties, especially in the woodwinds.

But like so many of the miners then who left the Sierra with hopes of a bonanza dashed, I was left dispirited, the gold of deep sensations still buried, somewhere out there.