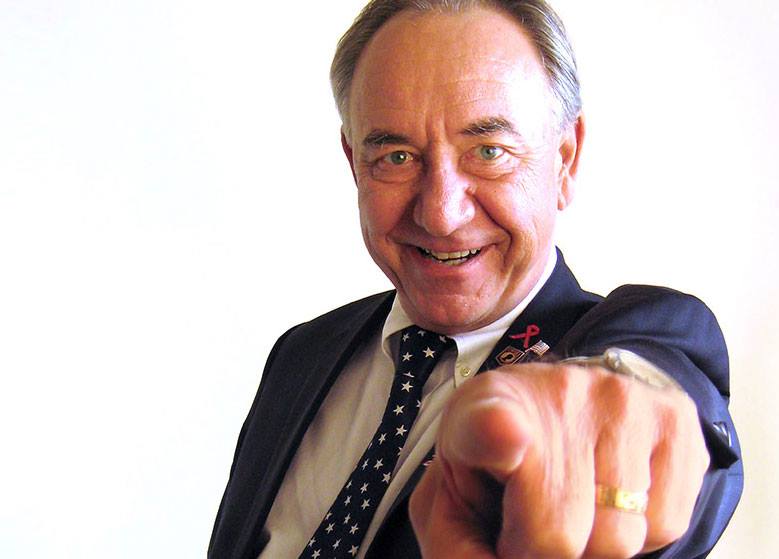 “Durst Case Scenario” is most certainly a guilty pleasure. To laugh at suffering in the worst of times feels wrong, but to laugh together can feel so right.

Will Durst cutely kicks around stage with energy, switching effortlessly between impersonations and monologues. He addresses us personally, yet never loses his way in his cornfield maze of a comedy show.

“Welcome to the Bay Area, where we are tolerant of everyone! EXCEPT for the intolerant! We love peace, and we would kill to keep it!” Durst succeeds in both praising and mocking Bay Area liberalism, getting us to laugh at ourselves. His commentary reveals that even progressives embody contradictions.

Using an antique overhead projector, a clipboard, and a microphone, Durst reinvents stand-up comedy. He manipulates his jokes to our taste after surveying us at the beginning of his show. Like a professor, he speeds us through Trump’s cabinet, providing scoff-worthy details. Durst makes us laugh, when we were certain there was nothing humorous. “The problem with a Trump Joke,” he says, “is that Republicans don’t think it’s funny, and Democrats don’t think it’s a joke.”

As a political comedian, Durst thrives on drama, admitting, “I am conflicted, I feel like a jackal feeding on the carcass of democracy.” Using creative metaphors, Durst helps us translate our frustration into laughter.

He rapidly roasts Trump, ironically explaining how we ought to be patient with Trump’s mistakes because “the presidency has never been an entry level position before!” He explains that we should count “Every day without a giant mushroom cloud in the distance as a blessing.” Durst emphasizes that we should be equally afraid of our Vice-President because “Mike Pence is the product of reverse taxidermy.” Durst flows between his overhead projector and the crowd, getting proximate and loose with us. He feels like that funny friend who knows how to deliver a good line, time after time. I have never seen a comedian be so inviting and comfortable. A lively crowd of progressives shout out issues they want Durst to address and he calmly responds, “Oh, I’ll get to that.” Durst uses the flexibility of an impromptu and informed comedian, as he weaves our comments and energy into his ideas—a masterful performance.

Diving into Dr. Suess-like rants, Durst deconstructs the problem with Trump and advises, “That’s right, get pissed. Make a list. Shake a fist. Come-on-Baby, let’s do the Twist!”

Leaping from tangent to tangent, Durst leaves a confusing, unmappable trail of laughter. He guides us down cyclical comedic holes, leading to bursts of laughter. At moments, I was lost in some Nixon era allusions, but I certainly left having a good time. My father found the show hilarious, yet sad. Will Durst takes on the Goliath-sized challenge of converting disaster into comedy. Durst confesses his lack of any new enlightening ideas on how to organize against Trump. He encourages us to “Come to theater, join as a community, talk, laugh!” This is protest comedy.

Durst says that being in San Francisco means he is preaching to the choir, but as he exclaims so sweetly, “In times like this, it’s nice to hear the choir sing.”

“Durst Case Scenario” written and performed by Will Durst, tech by Alexa Almira, at The Marsh, San Francisco, Tuesdays through December 19, 2017. Info: themarsh.org