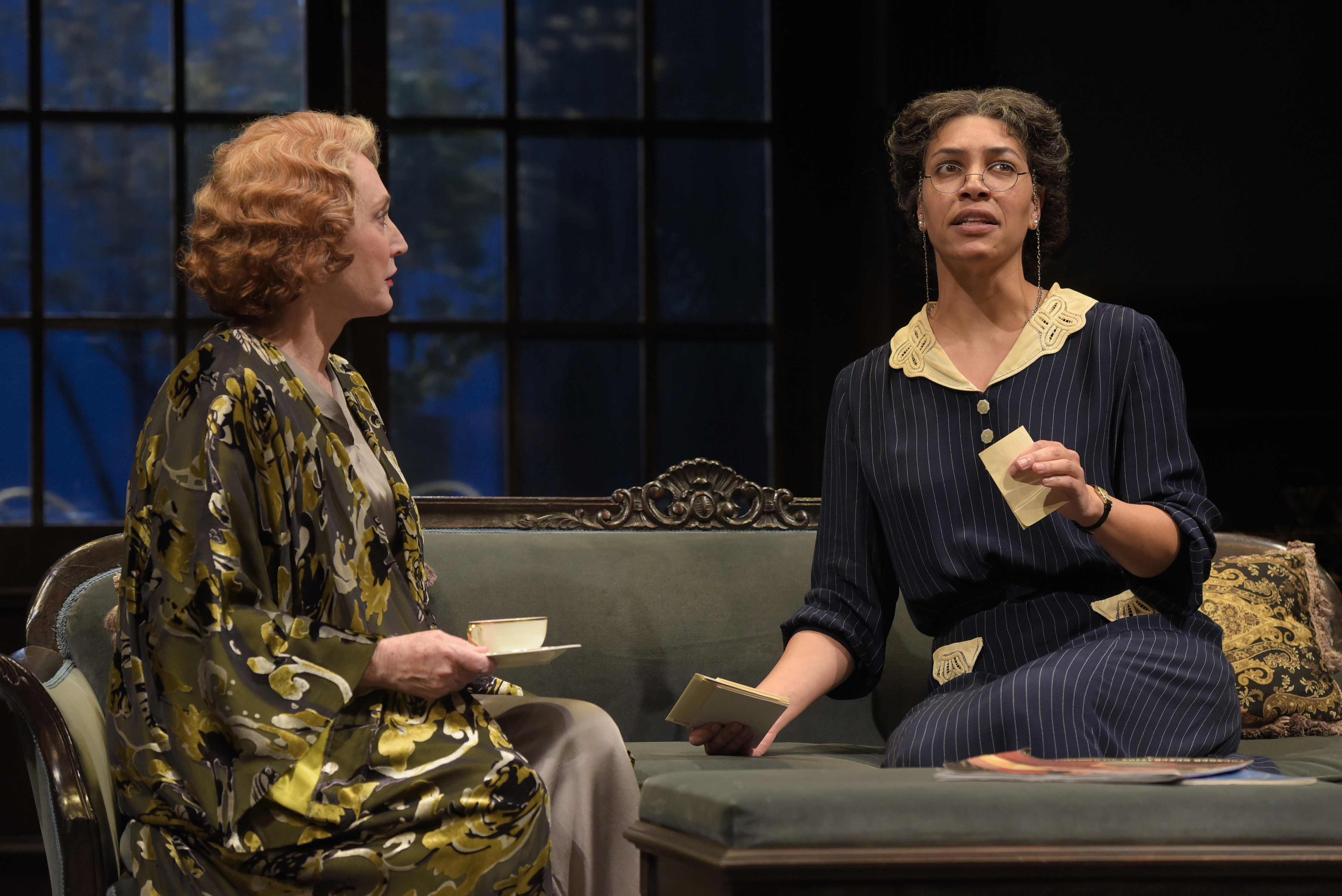 Berkeley Rep’s choice of  Lillian Hellman’s “Watch on the Rhine” (1941) plunges us into the pre-World War Two time of indecision, cowardice, and sporadic bravery. Hellman’s play illuminates the 1930s, when “good” folks could still turn their eyes away from the Nazi invasions, and live in their isolated bubbles.

The U.S. is at a crossroads in 1941, even though Fanny Farrelly (sprightly Caitlin O’Connell), D.C. social butterfly, doesn’t get it. Maybe our own “crossroads” is Syria, or the immigrants, or our basic humanity, inside and outside our borders. “Watch on the Rhine” at Berkeley Rep amuses us, and makes us consider what we would do in their place. The top notch acting grabs our attention.

Hellman’s play begins as a witty comedy, politeness all round, though Fanny, the matriarch, treats her butler (astute James Detmar) and her son (stalwart Hugh Kennedy) like objects. When citizens are asked to take sides, people like Fanny start ignoring the news. Their individual indulgences must continue—while Europe burns.

Hellman’s play is beautifully staged by Director Lisa Peterson, in the sumptuous design by Neil Patel. We are submerged in Patel’s richly wood-paneled ’30s house in a Washington, D.C. suburb, with a lovely, softly lit garden. Fanny wants the others to march to her tune, arguing constantly with her long-suffering companion Anise, touchingly played by the inspiring and assertive Leontyne Mbele-Mbong.

The comical Fanny likes to sound a raucous siren each morning to wake up her guests. Fanny is full of well-meaning energy, but her “bubble” stops at her lovingly created garden.

Who should arrive but Fanny’s long-lost daughter, Sara (intense Sarah Agnew), who has been living on the run for 20 years in Germany, with her German political refugee husband Kurt Muller (noble and humble Elijah Alexander). Alexander delivers a pitch-perfect embodiment of a anti-fascist fighter: Kurt has already been tortured by the Nazis, so Sara and Kurt seek asylum in the U.S.

Sara bursts her mother’s bubble, occupying our attention with her courage. She and her family arrive in haste and in poverty, all bundled up, on the cheap train to Washington.

When Tek threatens to expose Kurt in pre-war D.C., a spy thriller begins. Hellman unveils Tek’s consummate evil, as he also preys upon his wife, Marthe (sympathetic Kate Guentzel). The comic household becomes an image of the war between fascist and anti-fascist raging in Europe.

Lillian Hellman has drawn the lines of a morality play, mixing comedy with a political thriller. She keeps us off balance and makes us take sides.  The play is gripping, though sometimes slow, especially in the third act, where too much talk takes over.

Kurt plans to return to Germany to fight against Hitler, to liberate his fellow Germans. He is playing for higher stakes than personal profit. Hellman uses him to warn us what is to come.

In “Watch on the Rhine,” Sara and Kurt actually take decisive action on behalf of unknown others.  Kurt delivers the words that enlighten us: “Shame on us. Thousands of years and we cannot yet make a world.”

Is this how the Nazi’s took over in the 30s? Is this what’s creeping up in Europe and the U.S., right now?

With painstaking, methodical story-telling, this Lillian Hellman revival offers clues to our possible future. “Watch on the Rhine” presents an emotional perspective on our dilemma today.

“Watch on the Rhine” by Lillian Hellman, directed by Lisa Peterson, at Berkeley Repertory Theatre, Berkeley, California, in a co-production with the Guthrie Theater, through Sunday, January 14, 2018. Info: berkeleyrep.org