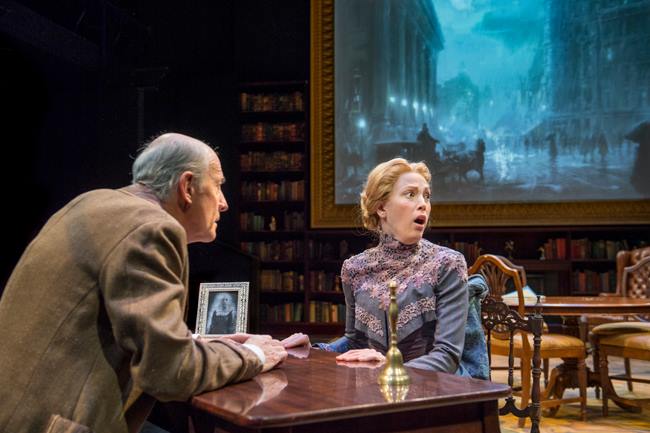 Bernard Shaw is back, and he’s alive and hilarious at Aurora Theatre. Aurora’s revival of Shaw’s unique blend of brilliant comic characters and sharp social critiques in “Widowers’ Houses” put us on the edge of our seats for three wonderful acts. Superb direction by the incomparable Joy Carlin and her cast of swiftly paced, outrageous Victorian types brings it all home.

In a delightful and richly appointed setting of Victorian splendor among the upper classes, Carlin and Set Designer Kent Dorsey have created an outdoor veranda in sunlight on the Rhine, a rich landlord’s elegant paneled library, and a luxurious period parlor to send the comedy soaring.

In three sumptuous scenes, backed by huge and beautiful projected etchings from the London streets, full of carriages and crowds, come these elegantly dressed, formal Britishers, whom Shaw loves to caricature. In all their stuffiness and superiority, we get to laugh non-stop at the self-important boot licker (hilarious Michael Gene Sullivan), as he ingratiates himself with the eager Dr. Trench (rubber-faced Dan Hoyle). Director Joy Carlin gives us a couple of intermissions to savor the humor and ideas.

Cokane tries to tame the freshly minted young doctor’s lust, with little luck. Dan Hoyle’s anxious, insatiable Trench is a wonder to watch–his expressions change instantaneously from desire to surprise to outrage. He is matched at every step by the deeply determined Blanche (demure, demanding Megan Trout) who holds her own, continually springing surprises.

But sidekick Cokane proves a slippery go-between for Trench and his haughty fiancee, the forceful Blanche. Dr. Harry Trench and Blanche Sartorius are secretly serious about their love affair. Only her funny, formal father, Mr. Sartorius (ramrod-straight Warren David Keith), stands her their way. Keith performs the absolutely finest reincarnation of stilted, censorious Sartorius, buttoned up to the neck in a severe long coat. Keith brings the house down with his patronizing, condescending manners!

The one outsider, the guy who blows the whistle on the pretentious middle class, the shabby worker who collects the rents for his employer, Sartorius—is none other than slimy Lickcheese (uproarious, magnificent Howard Swain). Lickcheese blows the whistle on his boss. Swain deserves every award in the book for his degraded Lickcheese. Later on, Lickcheese is transformed—in a fur-bedecked coat that steals the show along with Swain’s comic genius.

Ah! but Shaw raises one big obstacle: What happens when you “Follow the Money”? Like a good socialist, the reliable comic genius George Bernard Shaw follows the money when marriage looms.

The money comes from investments in shady property, exploiting the poverty of those who live meagerly in London’s slums—and so, Shaw’s game is on. How will Trench deal with the exposure of his future father-in-law’s deep pockets? How will Blanche and Trench deal with even more revelations about their own incomes?

Shaw makes us all his hostages to our hypocrisy–since the first outraged audience in 1892. In this, his first play, Shaw pulls no punches, starting a new wave of honest comedy. Each actor is delightful—in delicious costumes, splendid settings, and hilarious self-exposure.

How does Sartorius defend and debate his investments? How does Dr. Trench receive the news? Who else is involved and how “respectable” is their income, finally? There are many in’s and out’s and explanations and condemnations—each one a delicious comic indictment of present day exploitation, gentrification, and self-dealing.

Sounds a lot like where we find ourselves, today, with our own Sartoriuses and Lickcheeses running the show! But Shaw and Carlin offer a lot more style and many more laughs. “Widowers’ Houses” is a gem.