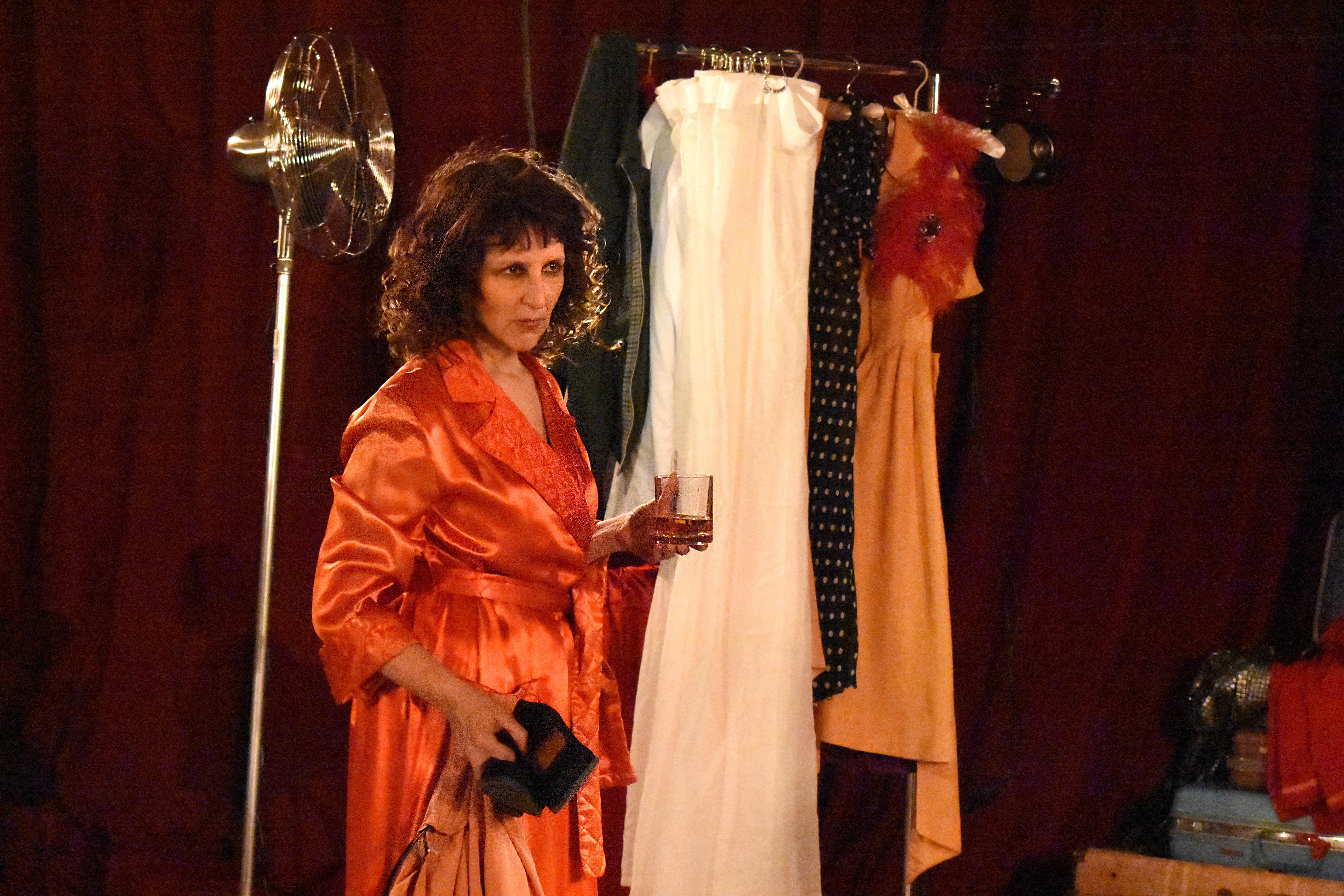 Tennessee Williams elicits emotions far beyond the daily lives of his working class characters in the 1940s French Quarter in New Orleans. Under the capable hands of Director Emilie Whelan, Ubuntu Theater Project injects new life into “A Streetcar Named Desire” (1947) and we are the grateful recipients.

Stephanie Anne Johnson’s innovative lighting with naked light bulbs adds starkness to the red curtained bare stage. Theater in the round creates intimacy, bringing us up close to the action.

Foremost, the multi-talented Lisa Ramirez. as Blanche DuBois, brings her formidable acting skills, displaying her range from faded plantation lily to debased alcohol and sex addict. Ramirez draws us inexorably into the life of a woman torn between dreams of grandeur and crazed debasement.

When Blanche intrudes into the seamy world of her sister Stella (conciliatory Sarita Ocón), she clashes immediately with Stella’s rough, brash husband Stanley Kowalski (powerful Ogie Zulueta). Blanche’s charade of being a Southern Belle, fools her sister. But Stanley shows street smarts and doubts Blanche. Stella, like a moth in a flame, is caught between her sister and husband.

Despite Stella’s efforts to create a connection, Blanche derides Stanley as a “Polack,” who is too ‘common’ for sweet Stella.  The tension is palpable in the steamy world Williams’ poetry conjures: we are torn between pity and fear of what is to come.

Blanche and Stanley clash as he seeks answers about the family fortune, which he insists also belongs to him “by the Napoleonic Code.” We find ourselves drawn into their violent family arguments, as Blanche gets trapped by her lies. Her attempts to maintain the charade of a lost way of life are based on illusions and dreams.

The dynamic tension between Stanley and Blanche rivets our attention Stanley feels the animal attraction—and mutual distaste—between Blanche and himself.  But the tension turns to violence and despair when Stanley exposes her lies and brings her down. Stripped of her façade, the true Blanche emerges, callous to Stanley, yet fearful at being exposed to Mitch and Stella. There are no heroes as Blanche is brutalized by Stanley while Stella is in hospital giving birth.

Blanche still places her hopes in the lonely Mitch (superb Dominick Palamenti), who is enamored by her airs. When Mitch rejects her, Ramirez’s Blanche rises to an agonizing, passionate lament.

“Streetcar” builds to Blanche’s tragic fall—a highlight of the moving Ubuntu production.  Ramirez and the ensemble bring us to tears for broken dreams. This “Streetcar” rolls down the track from Desire to Despair.

Ubuntu Theater has once again scored a hit, this time with true tragedy.