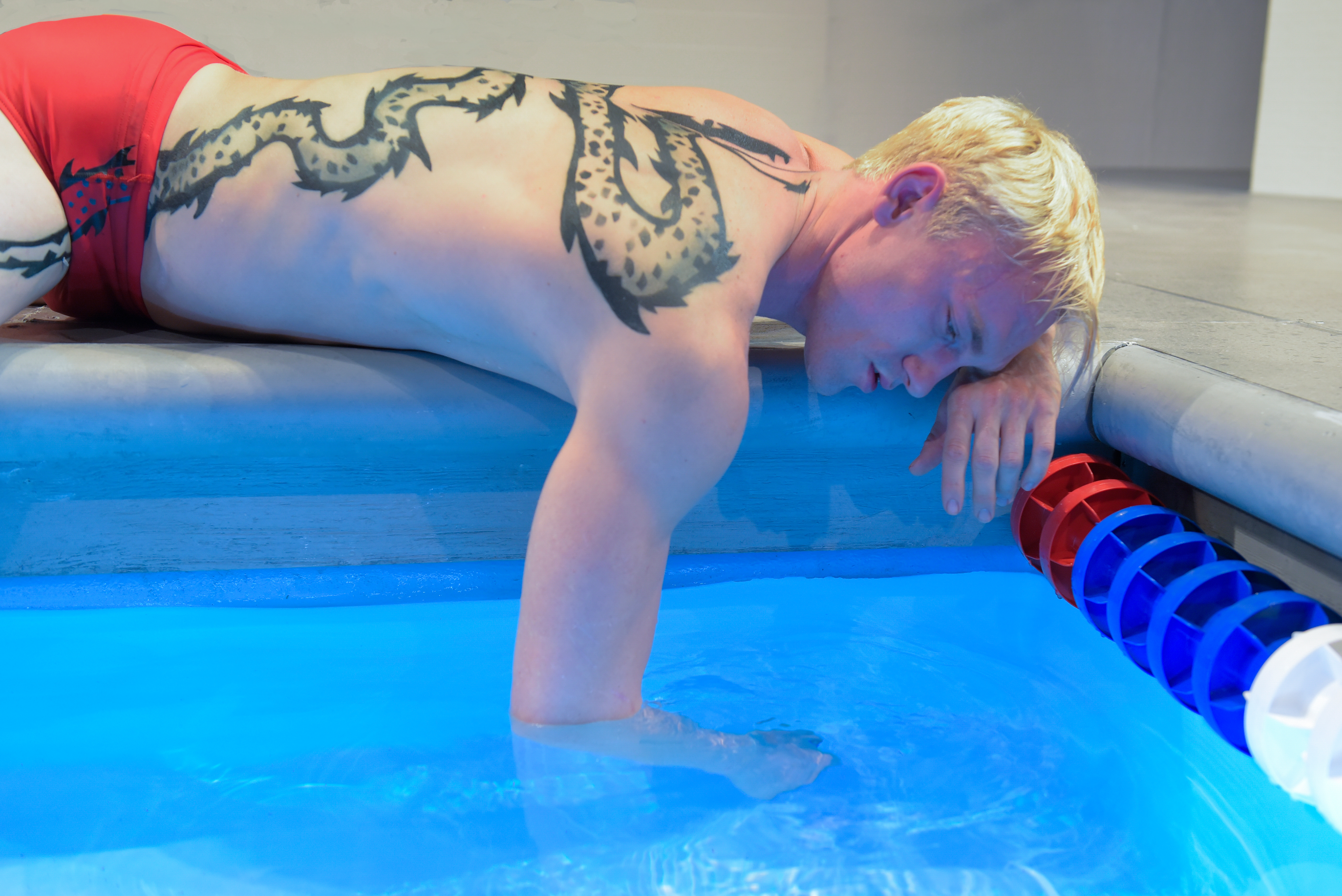 “This is a man …” says the anxious man in suit and tie, pacing poolside, and pointing at a blond, muscled swimmer in a red Speedo, who is hunched over and depressed. We are looking at a vast and shabby indoor pool. The stage features an actual swimming lane of that pool, full of chlorinated water–with red, white, and blue plastic floaters.

You can’t ask for a funnier or more dramatic beginning for Lucas Hnath’s “Red Speedo,” winner of the 2016 Obie Award for Best Play. Now that Olympic water is reflecting blue at Center REP.

The suited-up man is Peter (intense, hypnotic Gabriel Marin), ranting at breakneck speed. Peter, lawyer and brother, disciple and schemer, hilariously praises his divinely talented brother, Ray (self-absorbed, god-like Max Carpenter).  While Peter rants about his brother, Ray is inarticulate, head down, and silent. What a stunning comic beginning to a bone-chilling 90 minutes in the pool.

Ray, the nearly naked Max Carpenter, looks like a Greek statue come to life. Ray wears only the red Speedo and an elongated body tattoo of a sea serpent. He is in training for the Olympic trials the next day. Carpenter nails the role with halting, self-referential spacey come-backs that bring down the house.

Although the subject may be steroids, and the doping of an Olympic swim team, we all know that Hnath is talking about “Winning,” as the over-arching goal for U.S. lives.

Will Ray overturn the system or break into the Olympics to gain Michael Phelps-type fame and fortune? Can his Machiavellian brother, Peter, make Ray his dupe, while he negotiates with the Speedo corporation for the Big Bucks? Their wordplay is full of cheap wisdom and brilliant chicanery: we love to eavesdrop on the battle for Ray’s body and soul.

Ray is poor, down to his last chance in the American economic sweepstakes. Peter wants to make some big money off his worked-out younger brother. Max Carpenter supplies just the right amount of despondency and doltishness to keep us guessing. He comes up with halting answers, constantly changing ideas to alarm his brother, his girlfriend, and his coach.

His wonderful, straight arrow, imposing Coach (stalwart, noble Michael Asberry) brings righteousness to the negotiating table. Coach argues brilliantly with Peter, sweeping us up into their power struggle over the fate of golden Ray.

Peter has already sacrificed forlorn Ray’s former girlfriend, his only love Lydia (powerful, serious Rosie Hallet), who was his sports therapist. Peter disposes of her, handily, using the legal system to bind Ray.

The colloquial, rapid-fire, half-broken dialogue between Peter, Ray, Coach, and Lydia gives “Red Speedo” a Shakespearean spine. The brothers are engaged in a battle for wealth, power, and fame. Each is enmeshed in a deadly real game of Survivor or Hunger Games. The dog-eat-dog hunt for “success” spirals them down and down. Competition rules, like The Bachelor on steroids.

The four superb actors, and the letter-perfect direction by Markus Potter make this an essential American dark comedy. The shabby concrete walls of the local swim club, the vaulting ambitions of each contestant flashing into conflict, and the blood that is shed make “Red Speedo” true ritual and great theater. Time to see that pool, those actors again.