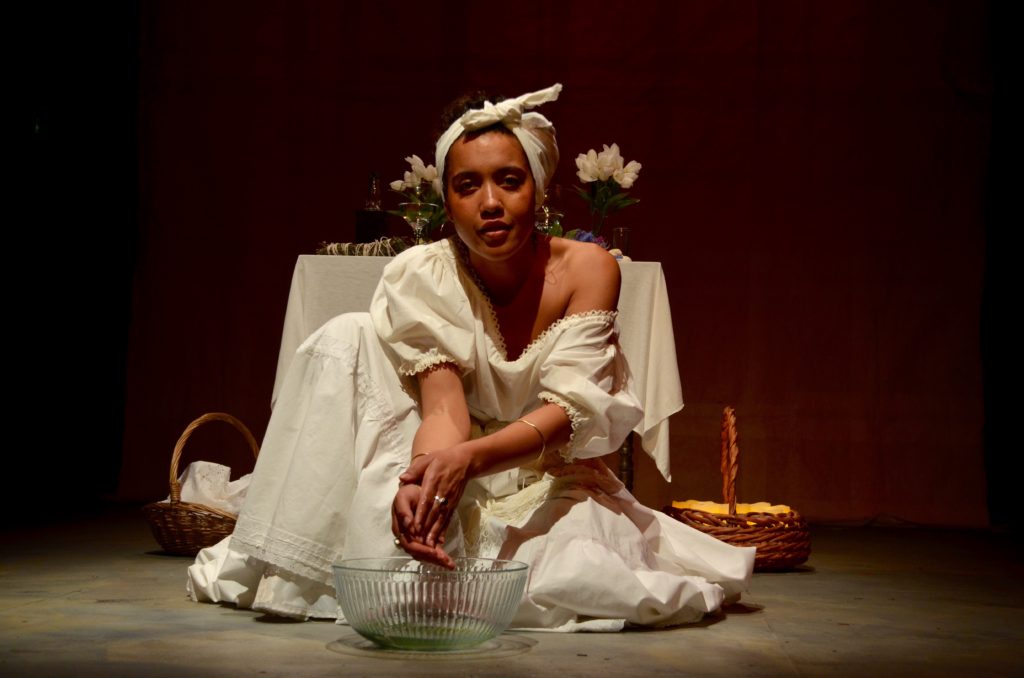 There’s a lot to like in “Between Us,” the four short plays I saw on Sunday afternoon at Live Oak Park Theater. In Program A, TheatreFIRST has assembled new solo plays by Bay Area writers. Each short play celebrates revolutionary actions by a hero or a citizen.  Each play shows us how a person grows great by taking action under intense pressure—and each play works!

In “Laveau, A Conjuring of Marie Laveau,” Dezi Solèy uses strong ju-ju, as the white robed Voodoo Queen of 19th Century New Orleans, Marie Laveau. The graceful Laveau practices black magic in slave-bound 1830s Louisiana.  Playwright Brit Frazier brings us a vibrant, assertive, in your face Black woman who talks directly to us. Solèy moves gracefully around her personal shrines, as she prays to gods and demons in Cajun French and lyrical English.

Director Margo Hall makes sure we feel the beating heart of a unsung revolutionary who tries to liberate  slaves in the U.S. South. Laveau is “in the business of setting Black bodies free,” in the midst of slavery. She takes us into her powerful heart and sets us free to see racial and class injustice.

In “Seven Fingers, the Story of Larry Itliong,” writer and director Jeffrey Lo updates us on another U.S. revolutionary we need to know about. Larry Itliong, played powerfully by Mike Sagun, actually began the Filipino-American grape workers’ strike. He started the Filipino Union, and he brought Cesar Chavez into the Delano strike in 1965.

How have we missed the crucial role played by this labor organizer? Sagun makes sure we never forget Itliong, again! Sagun plays farm workers, Chavez, and bosses, bringing Itliong’s struggle to living, breathing life. Those seven fingers testify to the terrors he faced as a farm worker.

In “Pussy Hat, the Story of One Woman’s March” by Katie May, we hear a shocking story of a conservative Iowa woman, who plays second fiddle to her domineering husband for years. But she awakens from her slumber, ending up in the Women’s March. She knits hundreds of pink Pussy Hats! She takes a wrenching journey from Iowa to Berkeley, starting a new life.

But one day, she also realizes her white privilege and begins a second journey. As Sharon, Jennie Brick plays the role with stunning truth and honesty—a joy to watch. Director Phoebe Moyer offers a Sharon who affirms the hope of change and change, again.

In “Just One Day: A Story of Martin Luther King Jr.’s Legacy” by Cleavon Smith, hard-working Esther (intriguing Sam Jackson) anxiously paces her room, after her boss refuses to give her MLK Day off from work. The message of MLK has not yet taken hold, and she is frustrated by work that demands she give up her beliefs, her power, and her ideals.

Esther gets across the strong feeling that she’s been pushed around too long, made to work at menial jobs forever, and it’s time for a change. “Just One Day” embodies the essential conflict between the worker and exploitation in the U.S. How can one woman budge that oppressive system?

Each of the solo plays asserts that one person, one hero, can make a change. Each totally embodies the change in herself or himself, moving revolution forward. These plays assert that we have to BE that change, every day.

Live Oak Theater resonates with the call for us to continue their work.