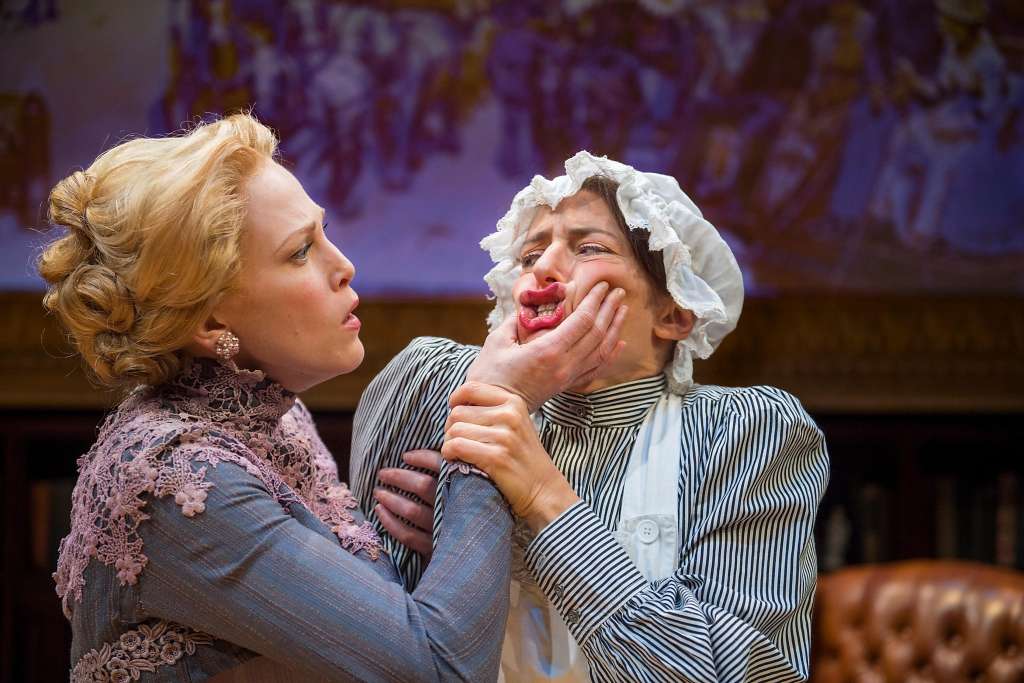 But what about the widowers and the widows? Who are they? What about the tenants and their children? Where will the working class live when their derelict apartments are renovated and rented to the gentry? We leave the Aurora Theatre with these unsolved problems as the giant video screen displays photos of the homeless encampments in front of Berkeley City Hall.

“Widowers’ Houses” shows us the lavish lives of fabulously rich landowners in Victorian England. The sets are decked with floating plants, prim white chairs and tables, fine china, towering bookcases—upper crust paraphernalia of the late 1800s. Four privileged British travelers on tour treat their waiter (knife-eyed Sarah Mitchell) like a punching bag. The rich setting promises a splendid bourgeois love story, but a financial discrepancy threatens to tear the rich from their comfort.

Millennials will note that Victorians regard marriage primarily as a transference of property. Although the love between Trench and Blanche is strong, love cannot conquer all. A greater force looms in the background: Greed. The ruthless incentive for capitalist profit stifles Trench and Blanche’s love.

Shaw’s brilliant writing depicts the origin of gentrification and the people capable of so putrid a scheme. “Widowers’ Houses” show us the roots of gentrification: egoism and avarice. I wondered about the relevance of Shaw’s 126-year-old play. Then I remembered what Sun Tzu said in The Art of War: “If you know the enemy and know yourself, you need not fear the result of a hundred battles.”

After a few days of reflection, I realized that I, too, live in the “Widowers’ Houses” of Berkeley. Director Joy Carlin has made it is clear to me why this work has stood the test of time.