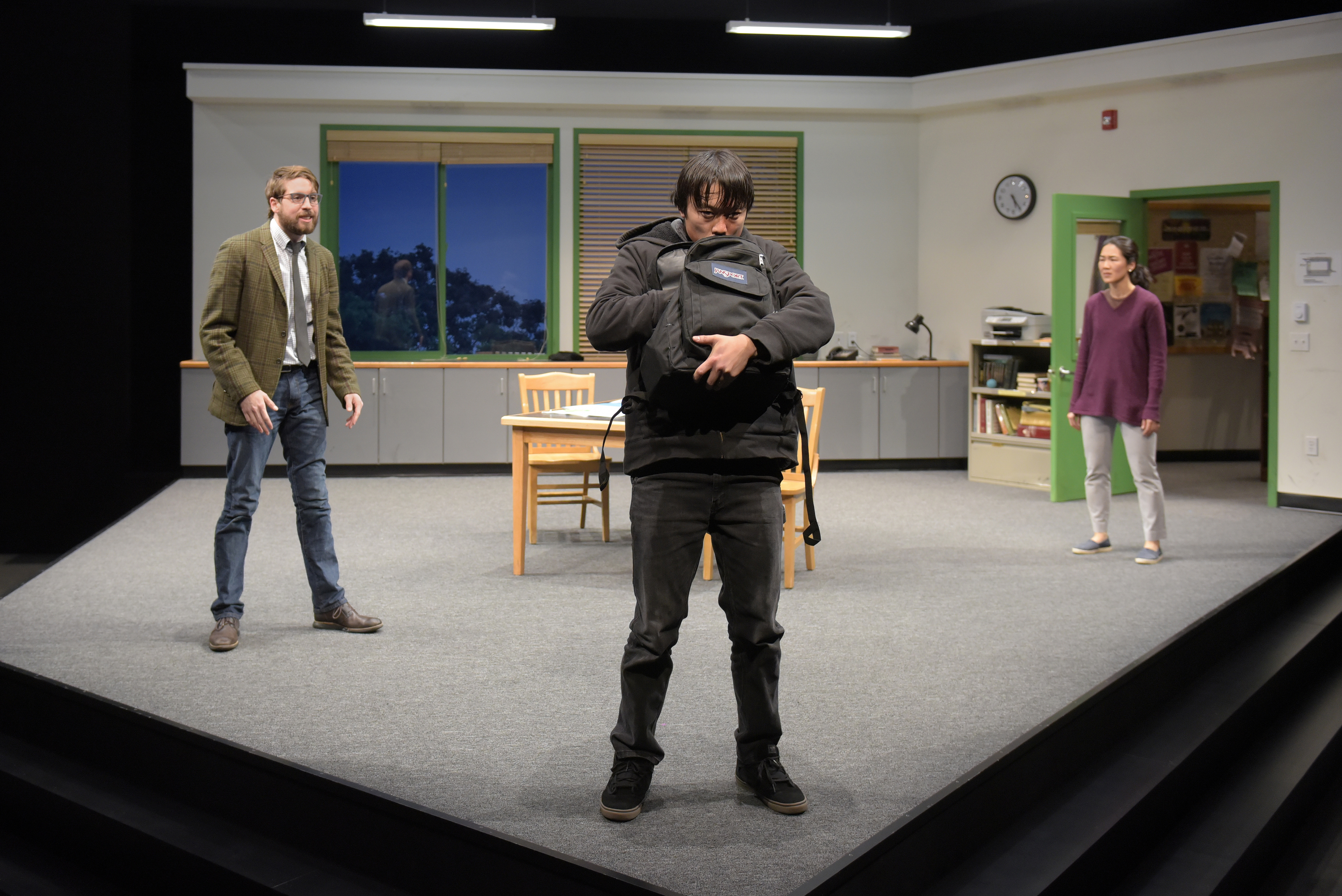 Sometimes a play just rings true. “Office Hour” by Julia Cho at Berkeley Rep delivers a fine story, first-rate actors, and an eerie set. In this masterful piece, she asks: Does mental illness lead to horrific school shootings, or are discrimination, bullying, and racism at work? Cho searches for answers to the unanswerable, staring unflinchingly at stark reality.

Playwright Cho’s dialogue flows gracefully, at times with near-Shakespearean elegance. Alternately heartwarming and terrifying, she evokes feelings of being on Freud’s couch. Comedy punctuates the intensity between fearsome student and fearful teacher.

Dennis’ harsh, graphic essays signal a troubled soul. Deeply wounded by American exclusion and family criticism, Dennis has become a wall of silence and intimidation. His entire being reflects rejection from birth.

Gina’s visceral response to Dennis’ two other (non-Asian) teachers tells us she does not believe he poses an unredeemable threat. Jackie Chung’s versatility convinces us that Gina really cares.  Gina thinks that her common heritage with the menacing Dennis will create an “us” vs. “them” bond.

Swathed in dark hood, sunglasses, and cap, the student presents a frozen mask. Dennis makes such chilling eye contact that I had to look away, an instinctive fight-or-flight response. When Dennis tells Gina that girls “look at me like I am a rotting corpse,” we unexpectedly empathize with the desolate youth.  Gina replies, “My Dad was incredibly sensitive: it was like he moved through the world without skin.”  Like Dennis, her father used the power of silence to intimidate and mask his pain.

Through the stark office windows, we see a delicate canopy of trees in the antiseptic set by Matt Saunders. A corkboard with curling postings offers a disarming sense of normalcy. The clock moves visibly, as time flies by. The door, the window become menacing.  As blackouts flash by suddenly, we glimpse potential violent scenarios. Backdrop lighting and sound effect wizardry worthy of Harry Potter back up split-second scene changes, like a blurry dream.

No, this is not easy topic. This is not an easy play.  Each actor performs beautifully. At show’s end, scattered theatergoers remained seated, engaged in talk.  Julia Cho’s beautiful writing and Director Lisa Peterson’s compelling staging offer rich rewards.