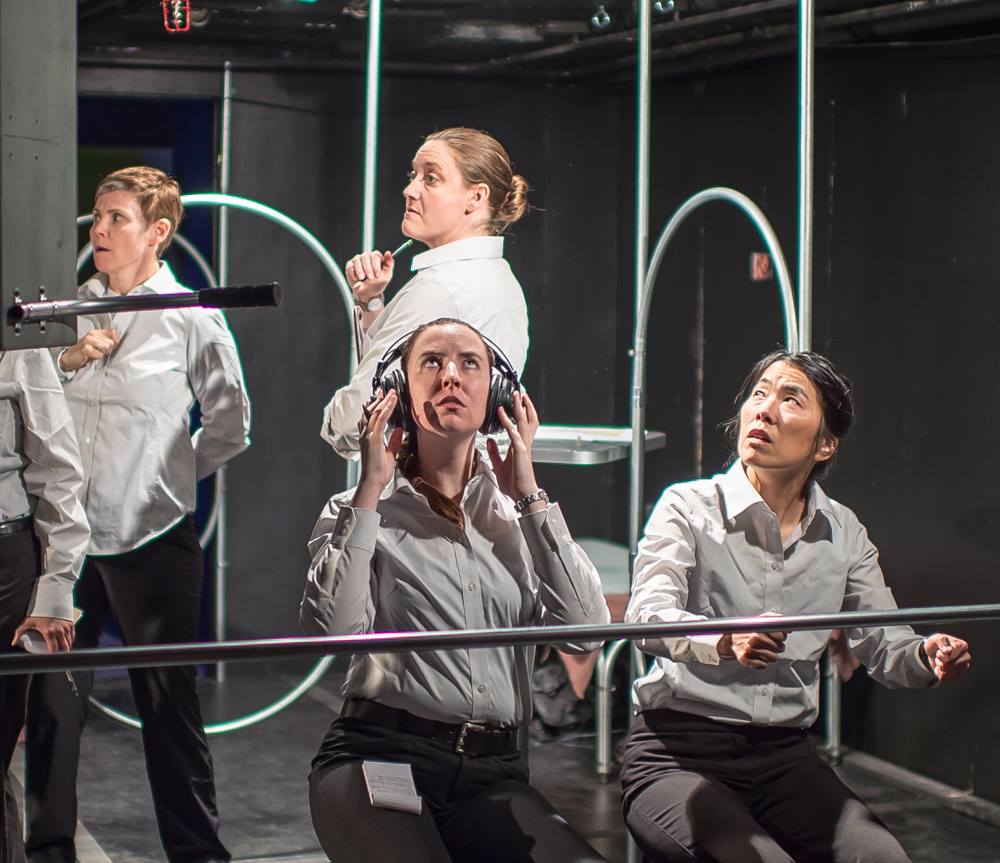 The British nuclear submarine silently shadowed the Russian sub Kursk, on 12 August 2000. In fact, there were three subs circling each other that day, British, Russian, and American, each pretending not to be there. The UK and US ships could have helped save 118 Russian sailors–but they maintained their silence.

If you want to dive below, under the Arctic Ocean, over by Russia in the Barents Sea, then hustle over to La Val’s Subterranean Theater, for a plunge into these icy, enlightening waters.

The magic works slowly on us, like a silent sub. The Boss (compassionate Eileen Fisher) commands her rowdy, contentious crew. The crew busily expose each other’s secrets, conceal feelings, and talk trash.  Casnovaken (daunting, passionate Melissa Clason) dotes on messages from her girlfriend Maria, back home. Men have filled these roles, so do these committed, serious women.

Mel (masterful Shawn Oda) plays the most touching shipmate, a new mother who misses her baby. Mel is harassed by the sadistic bosun Chalky (snarky Lauri Smith). Mel and Chalky’s antagonism forms a lynch-pin between the personal and political disasters in “Kursk.”

“Kursk” magnifies the tension in the sub, until the Russian stealth submarine explodes under water. What will these Brits do? The shock of seeing women in military maneuvers makes life and death decisions sharper. As they slip and slide through the narrow hatches, circling round ducts and pipes, they evoke the terror of the freezing waters.

The sailors’ actions call into question the political world that sends women and men to play out their lives undersea, to shadow ships shadowing them.

These women, undersea, are doing their masters’ bidding. Destruction of human feelings, individually and internationally, traces a dance of death that bursts on the clueless crew. They suffer from it, too, like the abandoned Russian crew.

Now we know how it feels to send soldiers, sailors of any gender down to death in ships. “Kursk” reminds us that destruction waits for those who accept war and antagonism as a daily diet. At La Val’s, six women undersea astound with their passion and terror.