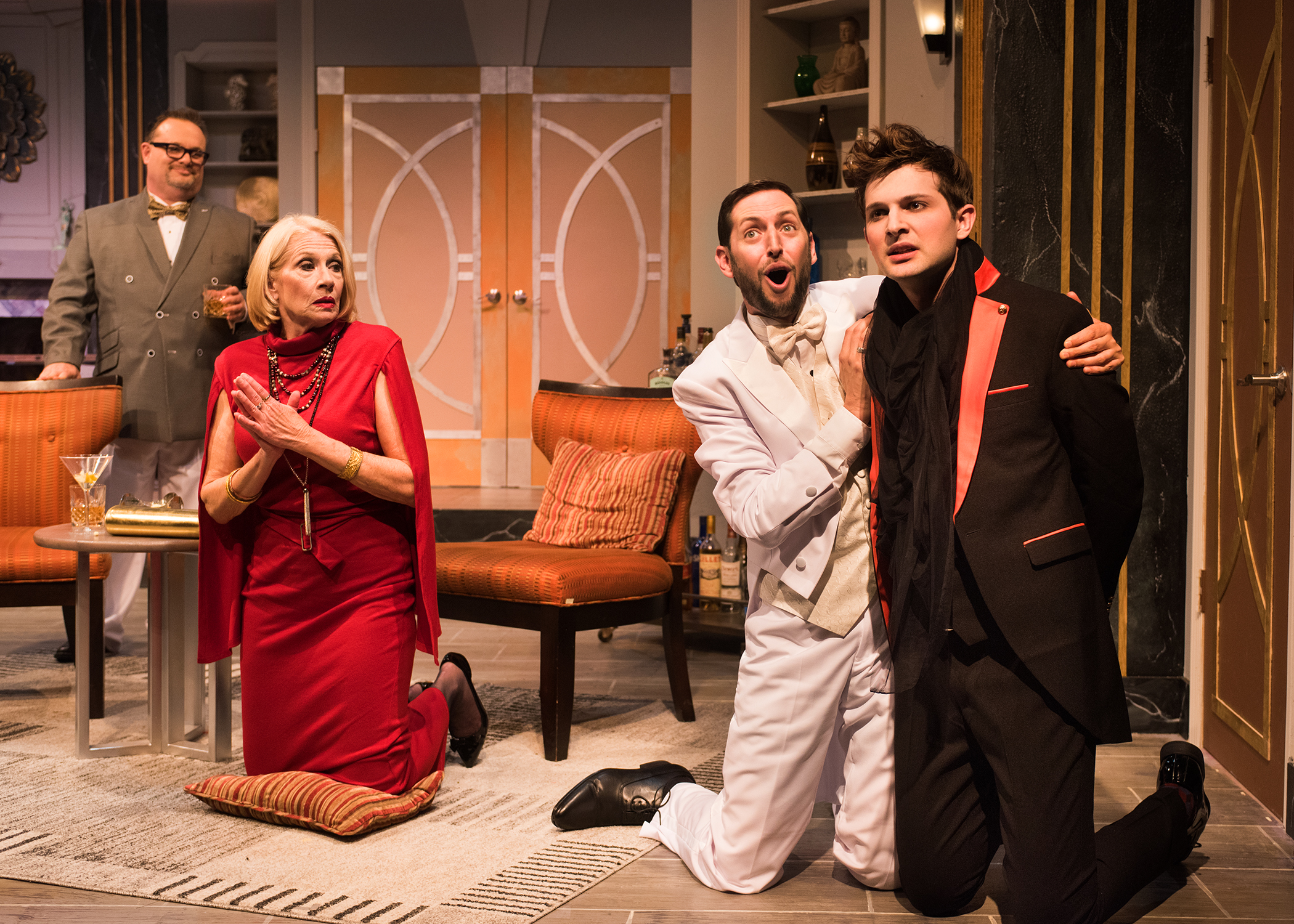 “It’s Only a Play” mixes all the jokes and clichés about theater we’ve ever heard. Like circling vultures, the playwright and cast await the Opening Night reviews of the play within the play, “The Golden Egg.” What a passel of funny and wonderfully egotistical theater folks! McNally gives us a satirical, ridiculous, and delightful peek behind the A-List.

The actors, director, producer, and writer are all assembled in a lavish pink and grey hotel suite in New York, waiting for the New York Times critic to publish his Opening Night review. That review means life or death for these hopeful thespians. It’s a riotous night with drugs, drink, and dreams—a comedy full of farce and jokes. Things really get rolling in the second act, when the dreaded review appears, and all hell breaks loose.

Fictional playwright, Peter Austin (white-suited, dynamic Chris Morrell), bursts in with eyes rolling, anticipating a night of triumph for his new play “Golden Egg.” Morrell slides around the stage like an inspired jack-in-the-box.

The big Hollywood star Virginia Noyes (multi-dimensional Michaela Greeley) still snorts cocaine, even though she wears an ankle monitor to keep her out of drug dens. Greeley knocks it out of the park as a drug-addled, maniacal Hollywood burnout.

Like the rest of these desperate theater junkies, Virginia sorely needs a hit.

James Wicker (versatile P.A. Cooley) used to be Peter’s lover. Now, Wicker secretly hopes that “The Golden Egg” falls flat because he turned down the lead role. These people are not nice to each other. Cooley creates a laughably loathsome TV star, who schemes against his friends, behind the scenes.

Melissa Keith shines with her brilliant, endearing interpretation of a rich, clueless novice producer, Julia Budder. Budder has tons of her husband’s money to spend on her obsession: theater. Like a demented hummingbird, Julia flutters around Peter—she doesn’t seem to realize that Peter is gay. With perfect comic timing, Keith artfully embodies a Budder who grabs our eyes with her style and our hearts with her naivete, as she tries to please everyone but herself.

As the world’s most forgiving producer, Budder gets everything wrong. She commits the ultimate malapropism: “If I can make it here, I can make it…there…?” We love her for her relentless pursuit of the arts. Simple, loyal Julia will even keep a flop afloat.

Ira Drew (elegant Geoffrey Colton) resplendent in black tux, hovers around the anxious cast at the opening night party. Drew represents the worst of hangers-on, the critic. Happily, he meets with disdain and abuse. Drew returns in Act Two wearing a shredded bloody tuxedo. I won’t tell you more. Colton perfectly frames the frustrated aspirations of the lowly theater critic.

And let’s not forget the innocent young man who takes the coats for the stars in the hotel suite. Gus P. Head (sweet, endearing Nicholas Decker) aspires to be onstage. Without warning, Gus breaks into song and dance. Decker adds a witty, heart-warming portrait of youth.

Contorted and tortured, Sir Frank Finger (high-strung Kevin Singer), the imported British director, flings himself around the stage. Masochistically, Director Finger tries to tarnish his own reputation as a Brit boy wonder. Singer is a wonder, anyway.

You can join these flirting and furious theater gypsies in their fun. They are waiting for us to join them in the penthouse suite. Director Arturo Catricala serves them up hot and hilarious. The real Terrence McNally has generated yet another gorgeous golden egg.