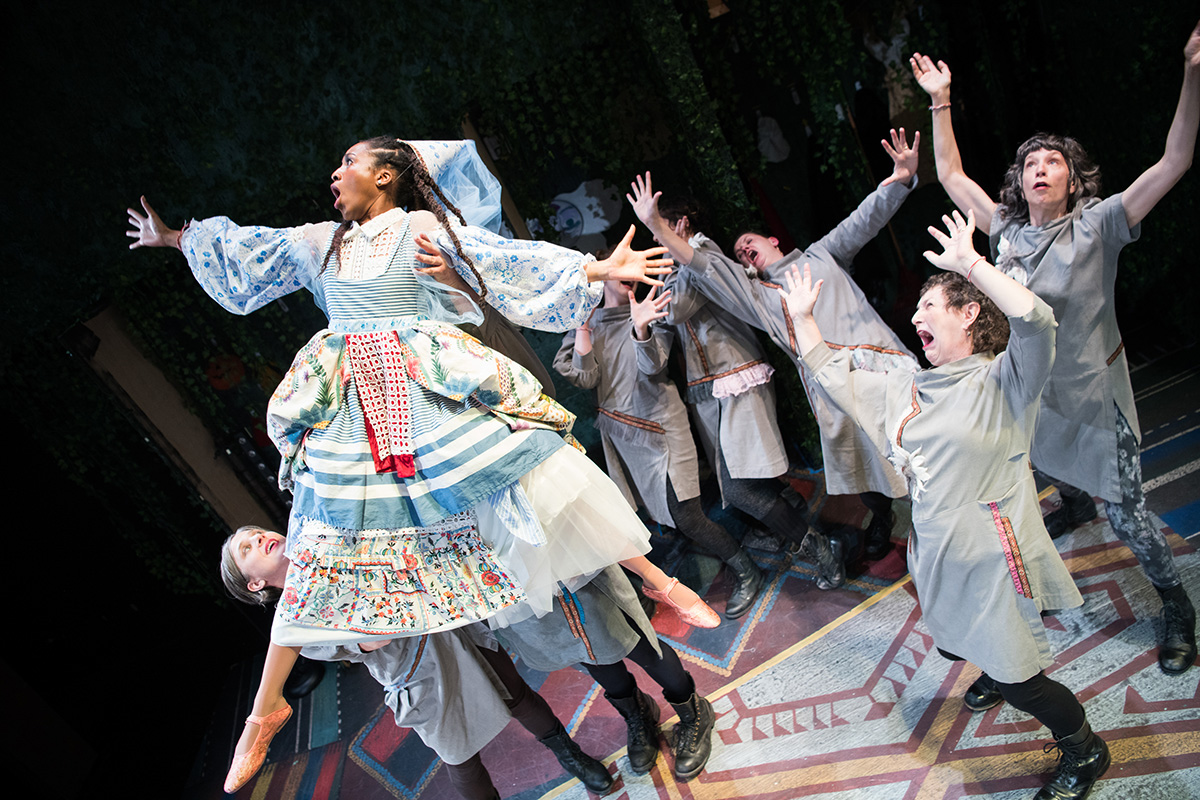 The heroines of “Iron Shoes” emerge from the sexist shackles of Russian and Romanian folk tales: “Finst the Falcon,” “The Enchanted Pig,” and “The Armless Maiden.” In these traditional tales, each maiden angers a patriarch and is forced to wear out a pair of iron shoes. To the delight of feminist fairy tale enthusiasts, “Iron Shoes” creates a new world where the heroines reject the sexist fate imposed by the traditional folktales.

Set designer Sean Riley plunges us into an enchanted forest, complete with with dangling vines, twinkling stars, and rope swings. Two moveable set pieces roll around in time with the music—becoming a treehouse, a closet, and a carriage. Magic lurks just out of sight and around every corner of Riley’s economical set. We see the vastness of the world onstage, thanks to Shotgun Players and Kitka Women’s Vocal Ensemble.

Song and dance form the foundation of “Iron Shoes.” Music director Janet Kutulas and driector/choreographer Erika Chong Shuch transform the Kitka Women’s Vocal Ensemble into prancing wood sprites. The Ensemble flutters about the stage, filling the theater with centuries-old Eastern European songs. Their foreign words, polyphonic tones, and gravity-defying movements transport us all to fairyland. Playwright Michelle Carter weaves song and dance into her words, telling the gripping tale of three girls strapped down by the injustice of patriarchy.

One after another, the First, Second, and Third Girl (evocative Sharon Shao, electric Angel Adedokun, and intense Caitlin Tabancy Austin) are duped by jealous sisters and witches. One by one, they are forced to forfeit their true loves. The girls can only recover what they’ve lost by wearing out a pair of oppressive iron shoes.

The sadistic Narrator (potent Beth Wilmurt), with Apprentice (bright Erolina Kamburova) in tow, ignores the three girls’ cries for mercy. When the Narrator tries to swing away into the starry night sky, the girls pull her back down to earth. We are elated when the three mavericks force off the Narrator’s tuxedo wingtip Oxfords. The girls force the Narrator to walk in their iron shoes.

What a treat to see dynamic Rowena Richie abandon her role as narrator and instantly transform into the legendary Finist the Falcon. Amazingly, multi-talented Travis Santell Rowland morphs into the mother of the sun, moon, and wind, in quick succession. And charming Erin Mei-Ling abandons the ensemble to become a suave enchanted pig. Costume designer Alina Bokovinkova serves up some hot looks.

Prop designer Devon LaBelle fills the world of “Iron Shoes” with kingly scepters and capes, falling leaves and snow, and giant fans, in rapid succession. Props whizz through the air, seemingly coming from nowhere. Each large bone or oversized sawed-off finger that the Narrator pulls from her dress adds to the peculiar feeling that we are in “a certain kingdom, not in our world.”

“Iron Shoes” redeems fairytale maidens done dirty by the patriarchal storytelling preserved in old-world texts. In Shotgun Players’ lively production, each girl emboldens the other and together they confront anachronistic views of an outdated world.

Like the teenagers at the “March for Life,” the girls take control of their narrative in an attempt to save their own lives.  “Iron Shoes” gift-wraps lovely new lessons in a visually stunning and imaginative form.