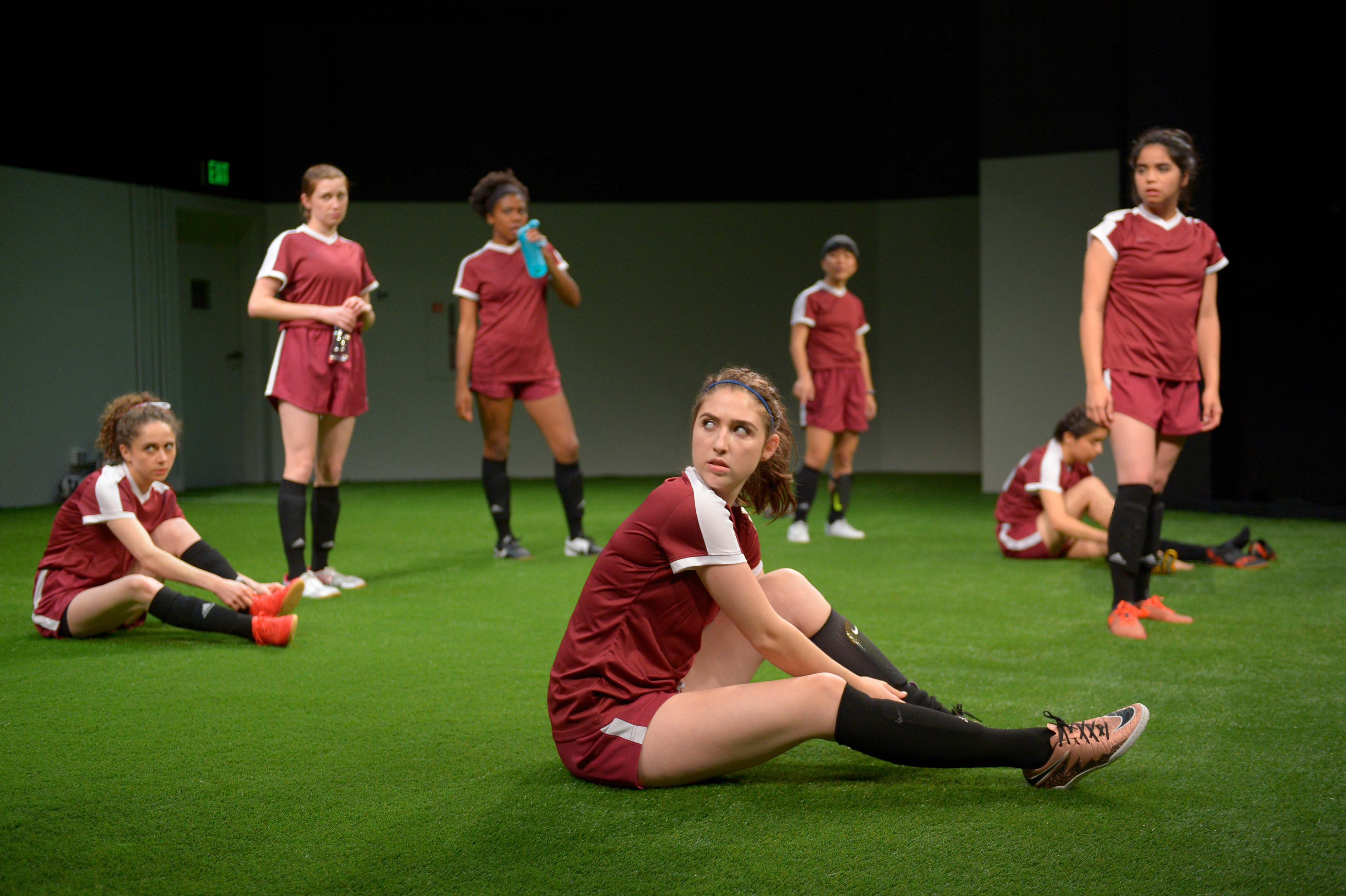 In “The Wolves,” we get to follow nine teenage girls on their elite indoor soccer field in Middle America. These high school girls dance and weave across the green turf while they talk to each other in rippling flows of conversations that rise and fade and surge again into our attention.

They talk about opposing teams, anxieties, international events (from Cambodian war criminals to Chinese internet freedom), dating (“He, like, made fun of my calf muscles, and tried to stick his hand down my shirt”), Plan B, and serious secrets, letting us in on real live girl talk.

These conversations form the action of Sarah DeLappe’s unique play, in which the girls do not have names but, instead, only the numbers on their soccer jerseys. But soon, we get to know their identities and lives, as they form themselves into a more perfect union. Director Morgan Green has achieved a tightly choreographed vision of suburban teen-age girl-life.

Their dialogue runs like music, a flowing babbling brook of hilarity, drama, banality, aggression, tenderness, and absurdity, with virtuoso performances by accomplished young actors. The ebb and flow of teen age conversation creates a realistic familiarity, while the girls precisely stretch and drill together on the vast green stage.  Shockingly, they let us in on their lives and create intimacy.

Superbly acted, each actor creates a unique character; not a cookie cutter teenager. It’s exhilarating to see teenage girls outside of adult control—their offstage coach may be hungover. They work together whether they like each other or not, with inevitable power struggles and growing pains.

If not for this team sport, some of them would never have such great friends. Brash and sophomoric #13 (realistic Nicole Apostol Bruno) and precocious, professional team captain #11 (dynamic Sango Tajima) annoy each other. But, as part of the Wolves, they work in tandem.

As the team trains with military precision and converses with abandon, we see a deeper value in team sport. This tightly wound team prepares wondering girls by pointing their egos in a common direction, magnetically. The team gives them each a role when crisis threatens. These girls surpass ego and become greater than the sum of their parts.

“The Wolves” is fabulous and complex—a new kind of collective awareness. Better march over to Mill Valley to catch “The Wolves.”