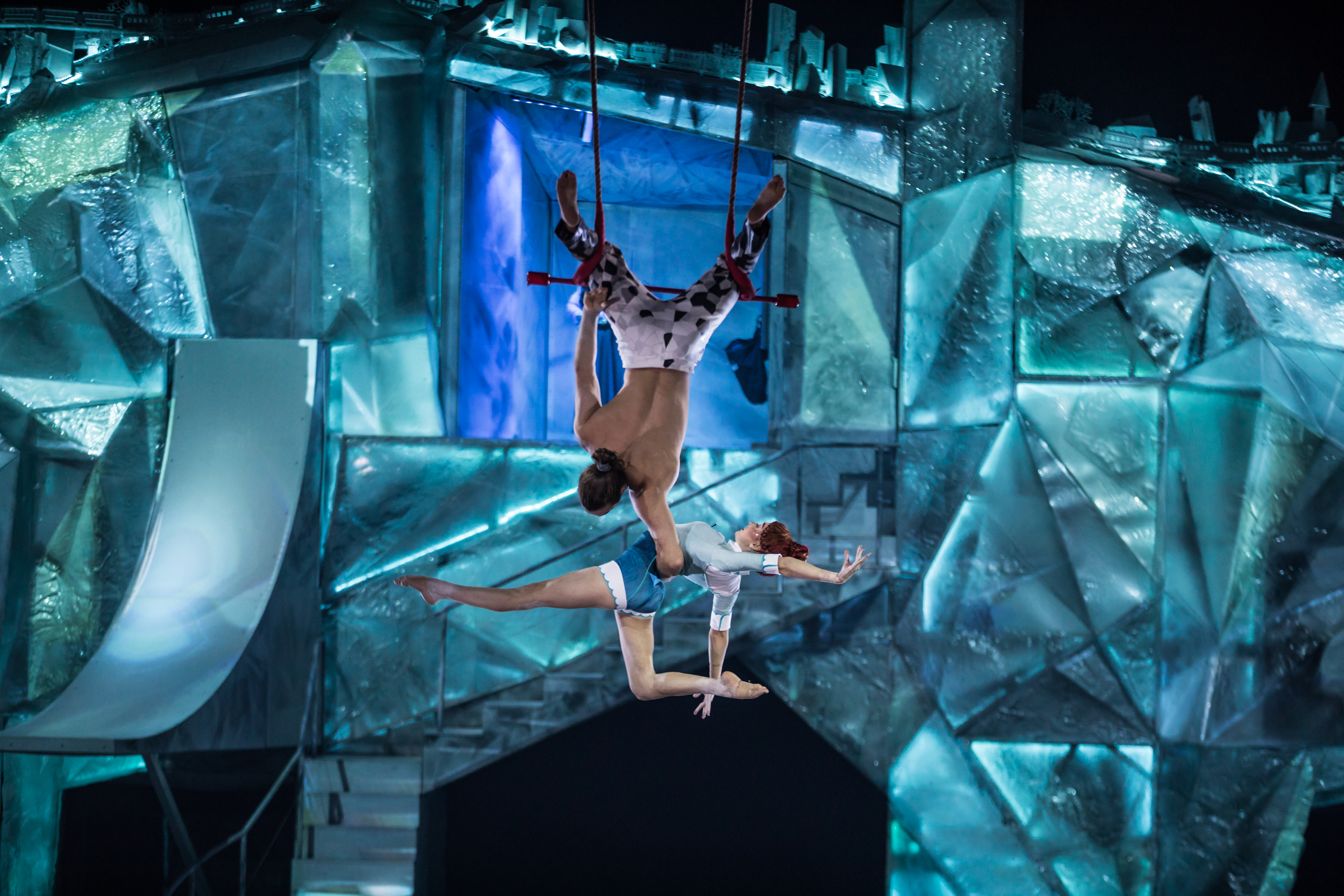 by Tyler Jeffreys and Evelyn Arevalo

“Crystal” offers  visually stunning sets with minimal props, concentrating on sharp lighting effects that paint the massive SAP ice rink in iridescent technicolor. Have you ever been to an electronic dance music concert? Think LED lights fused with classical artistry. We can choose between following the artistic projections or the corporate characters, ballroom dancing or a life-sized pinball machine.

We join Crystal, a young writer, on her odyssey of self discovery, as she sinks slowly through a crack in the ice. With her blazing red hair, short blue skirt, white shirt, and trailing red scarf, Crystal reminds us of a prep school student. While she is swallowed up in the ice, an identical woman in a darker-toned shirt, is suspended from the ceiling. Beautifully lit ice powder sprinkles down on them both. The hanging girl makes a scary mirror-image of Crystal’s repressed imagination.

Shadows follow the skater’s movements, as Crystal’s inner monologue reveals her secret destiny. HD Holographic projections surround Crystal, as she skates through grade school, college, a “real job,” and falling in love. When she lands her first big girl job, we see pop-locking corporate zombies in cool blue suits typing and tut-ing in time with an original hip hop/trap soundtrack, bringing style and youth to the show.

Red LED lights dance around a lovely bald aerial performer with a red bow-tie, as he courts Crystal, the young writer. When Crystal finds love, she looks up hopefully at this aerial master, glowing as he scoops her up.  He grabs and swings her up into red velvet aerial holsters. Together, they twirl as they lock eyes and melt into each other’s arms.

Cirque Du Soleil establishes itself, once again, as a theatrical power house by charting untested waters. We are briefly introduced to our all time favorite: the clown! Crystal’s new ally wears worn-out overalls, covered with hazmat stickers–along with other costume surprises. He waltzes with a street lamp after his car crashes. We laugh out loud as a kid shouts, “Are you okay?”