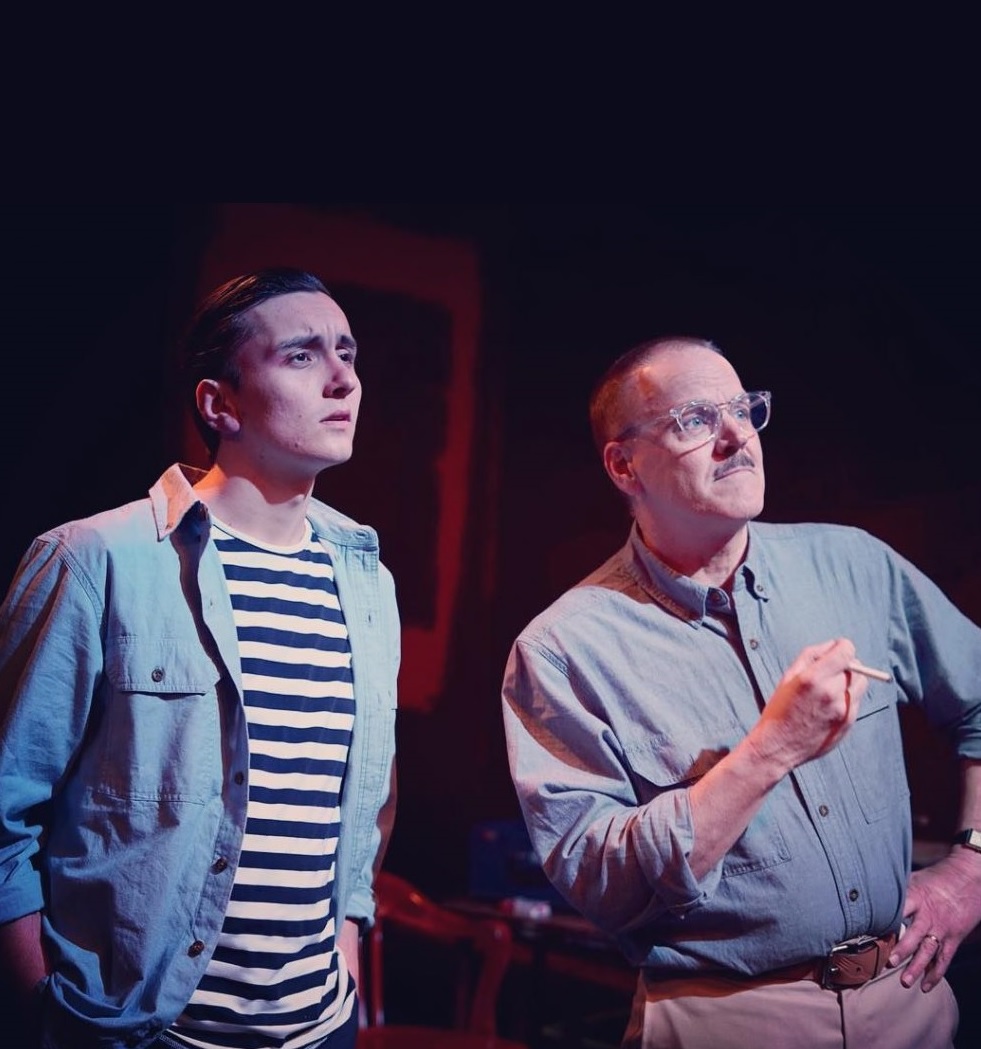 What leaps out at me from “Red”? Their sudden bursts of anger. The vitriol! Rothko slamming down his paint brush, immediately echoing an abuser throwing a tantrum. And a deep sympathy: This Rothko is a child pretending to be a master.

Bruce Avery (Rothko) and Nick Moore (Ken) excel at confrontation and anger. Their frenzied salvos assault us in the intimate Phoenix Theater.

When Ken confronts his mentor, they stand face to face, feverishly naming brilliant variations of RED: rust on a boat, tomatoes, arterial blood, apples….on and on. Their duet of anger and passion creates a believable intimacy, because Rothko finds the fight he is looking for. And Ken must struggle to not be blotted out.

What brings them together makes sense on the level of emotion. Their intimacy advances through a coherent, passionately well-acted dance of desperation. Both seek recognition and truth.

While anger and desperation is running on all cylinders, love and vulnerability sputter. When “Red” reaches the crucial moment of tenderness, Rothko’s painter’s assistant cradles his boss in his arms. The young man lovingly wipes the red paint off  Rothko’s hands, like a mother cleaning and taking care of a baby. I felt relief—finally, the contact we are waiting for!

But the intimacy seems not to be earned by a relationship that grows before our eyes. And so, the scene between Master and Disciple strikes a dissatisfying chord.

When the artist’s assistant, Ken, reveals that his parents were murdered, I expect to feel his excruciating vulnerability. But the story of Ken’s murdered parents fails to engage us, falling flat. We miss the lasting impact of carnage on Ken’s character. Rather, it feels like playwright John Logan’s ploy to make Ken more vulnerable.

Rothko and Ken’s connection misfires, leaving me with the feeling that their intimacy is missing. Another qualm comes from the passage of time in the play. Although “Reds” depicts two years in Rothko’s studio, the two of them seem hermetically sealed, with little sense of time passing. We wonder how time affects their struggles.

John Logan’s “Red” provokes thought and analysis, leaving a deep impression. But it’s hard to escape the feeling that while it has potential, “Red” offers more spectacle than heart.