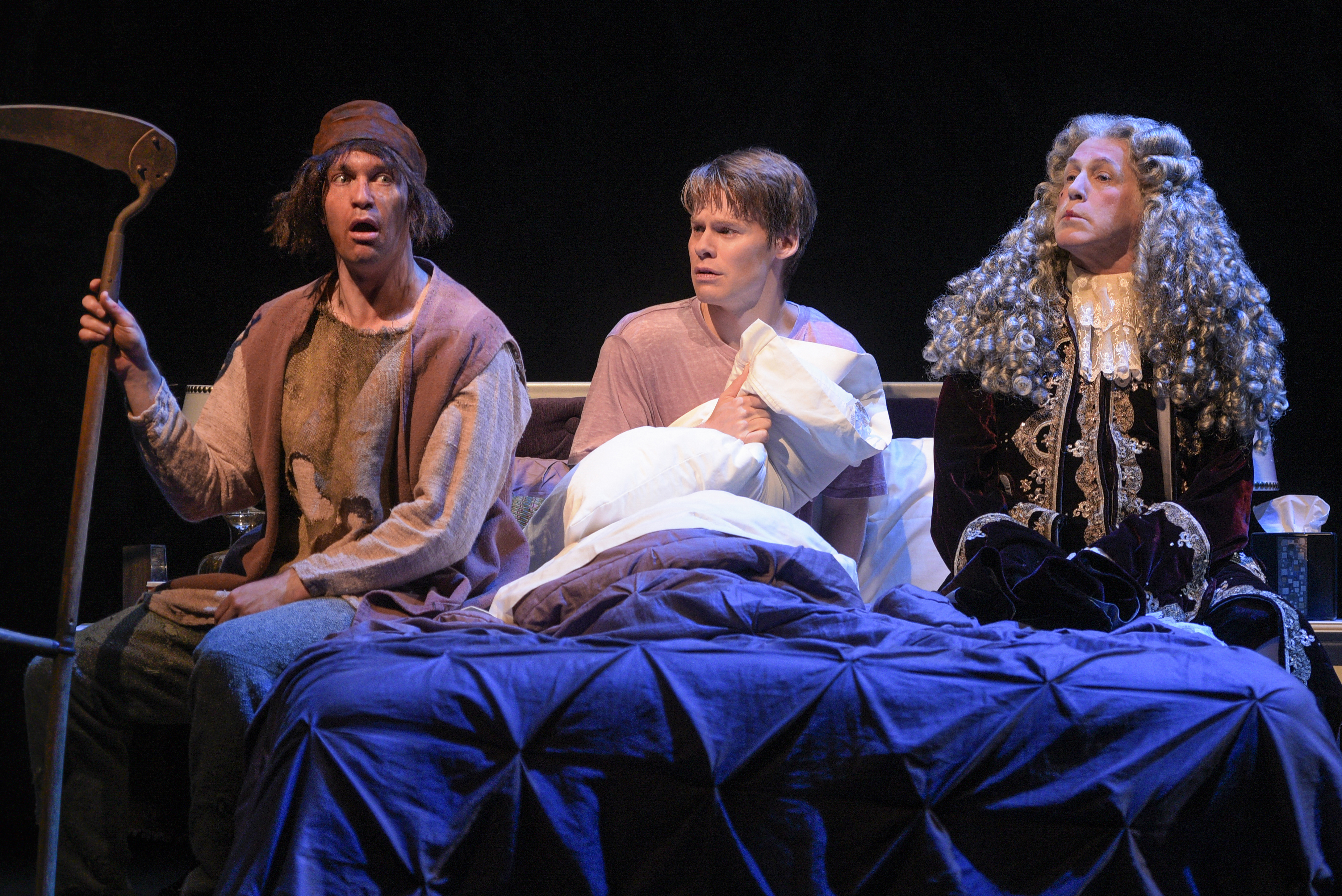 More than 25 years ago, I saw the first production of Angels in America at the old Eureka Theater in the Mission, in 1991. Now we can celebrate Angels‘ brilliant connections between our personal lives and U.S. history, thanks to Tony Taccone’s astounding anniversary production at Berkeley Rep.

We face monumental green marble slabs, poised in mid-air, and illuminated with titles at crucial moments during Part One: “Millennium Approaches.” Kushner’s three Act headlines, alone, can chill your bones:

Scenes roll in on sliding platforms, taking us to a Jewish funeral, Central Park, an AIDS ward, New York apartments, and a thunderous heavenly descent. It’s Inferno in America. Each extraordinary scene, deliciously swift and distinct, marks a stage in a journey to wrestle with an actual, anxious Angel.

When the mysterious Angel intrudes from the sky, all Heaven breaks loose! The forceful female Angel brings new meaning to erection and destruction, recruiting youthful Prior Walter (riotous, gripping Randy Harrison) as the Prophet for the Future.

Beyond the superb and moving staging of rain, thunder, burials, rabbinical orations, and deathbed denials, we are enchanted with Prior Walter. Harrison creates an earthy Prior who deals with a diagnosis of AIDS in 1985. Prior rises. Prior embodies gay history in the cold-hearted Reagan years, as he struggles with disease and homophobia. We meet his ancient ancestors, Prior 1, a foul-mouthed medieval peasant (raunchy Danny Binstock), and Prior 2, an 18th Century fop (scrupulous Stephen Spinella), who hilariously pile into his bed, in a most fabulous dream.

Prior is abandoned by his New York Jewish boyfriend, Louis Ironson (intense, absorbing Ben Ismail), after a funeral presided over by an ironic Rabbi (gender-swapping Carmen Roman). Her rabbi delivers a soul-stirring eulogy about immigrants, who came heroically over the sea to make America.

Prior and Lewis, the afflicted and the abandoned, the savior and his cynic, parade through “Millennium Approaches”—the prophet and the doubter. Prior gets supernaturally appointed as a Prophet—his disease a sign.

We have a miraculous Devil, too. Stephen Spinella portrays the real-life McCarthy-ite, GOP, sleaze-bag, Anti-Communist, lying lawyer Roy Cohn. Spinella brilliantly harmonizes his role with the corruption and greed of the Extravagant Reganaut Eighties.

Spinella’s genius takes us to the “threshold of revelation,” a rare state of inward seeing. Spinella’s Roy Cohn, dying of AIDS, refuses to admit his illness, but he manages to extort the first AIDS drug via Nancy Reagan. He bullies his doctor into calling his disease “liver cancer,” as did the real Roy Cohn on 60 Minutes. Cohn cannot admit to being homosexual—because he claims, “Homosexuals have no clout.” (This liar/lawyer trained our present Great Liar–a fact.)

We could spend all day with Roy and Prior and, with Harper Pitt (lively Bethany Jillard) and Joe Pitt (sweet Danny Binstock), two harried Mormon souls who writhe in the 80s chaos of swirling corruption and careerism.

Harper is haunted by Mr. Lies (fantastic Caldwell Tidicue) who appears in her dream as a travel agent in white furs. Mr. Lies whisks her off to alluring Antartica. While Joe–well, Joe falls for Roy Cohn’s politics, but then falls for another guy, too. Binstock offers a stunning revelation of a complex character.

Caldwell Tidicue does wonderful work as Belize, the fabulous ex-drag queen, Prior and Louis’ far-seeing friend. And what a friend—he supplies medicine, advice, and style, effortlessly. Tidicue holds all the amazing mysteries together—Ethel Rosenberg, Roy Cohn, Prior and Louis, Harper and Joe, all double-cast to suggest their roles in the hereafter.

Part Two, “Perestroika” has its own answers—and its own separate world…review to follow …

As the Angel implores us: “Let the Great Work Begin.” These are plays that defy logic and exist in a magical universe of Angel Wars, where every American will feel at home, instantly.