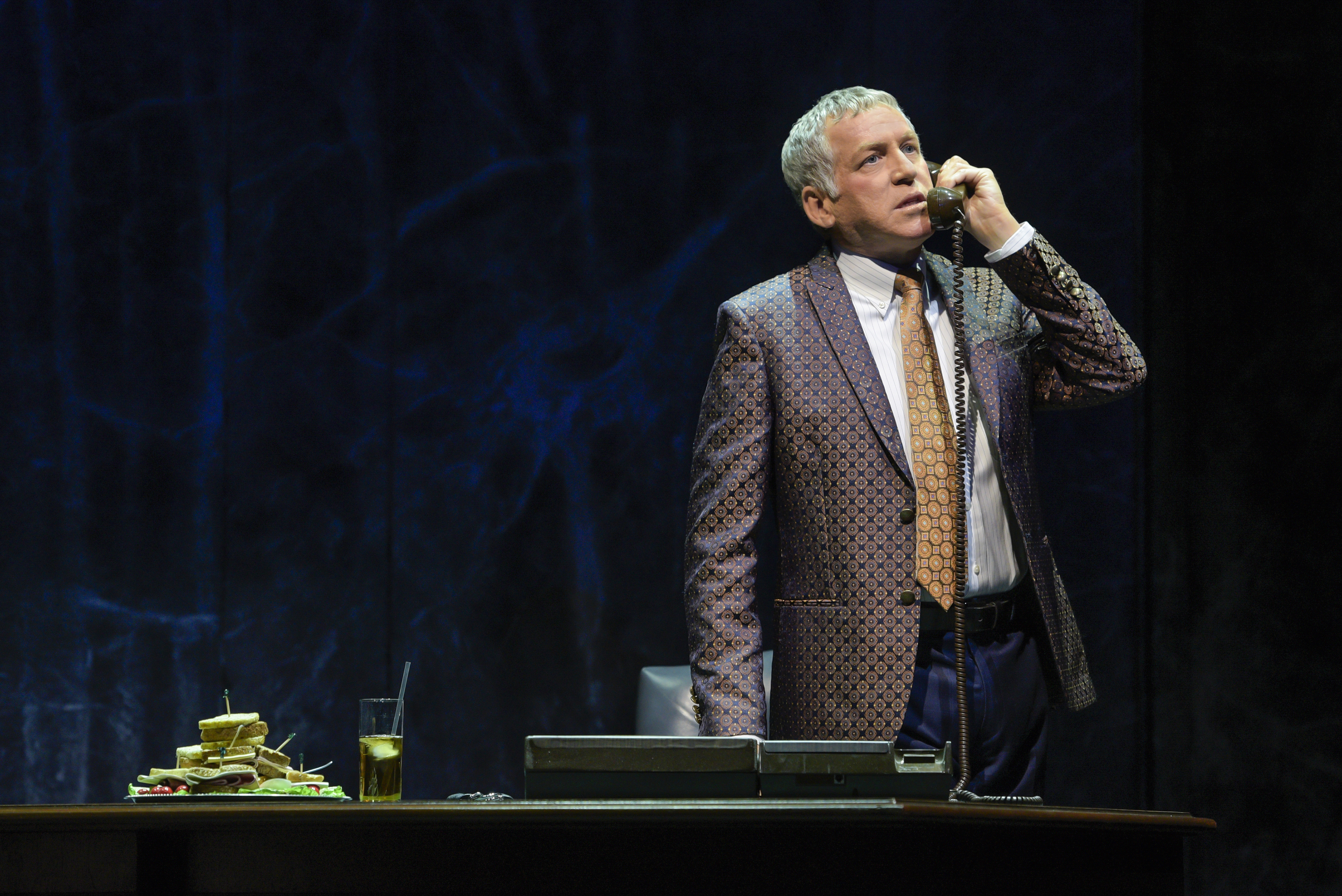 Stephen Spinella Slays Us as Prince of Darkness

Angels in America: A Gay Fantasia on National Themes

At the Berkeley Rep production of Angels in America, Stephen Spinella dominates the stage as Roy M. Cohn, the real-life 50s to 80s, connected, sleazy, closeted gay lawyer. In Tony Kushner’s epic drama, Cohn reveals himself as a soldier in the conquering forces of the conservative Reagan revolution of the 80s.

Spinella reaches superb heights as the conflicted and dying Roy Cohn. Cohn was once a young legal side-man to Senator Joseph McCarthy in the Anti-Communist Crusades of the 50s. Now, in Kushner’s Angels, Spinella speaks in a raspy, Brooklyn accent, grasping at power.

As the well-known GOP Fixer Cohn, Spinella displays how crooked politics can get. His Cohn admits to illegally promoting the execution of Ethel Rosenberg for McCarthy in the 50s. Spinella tackles the role of right wing operative, opening up the whole Reagan Era, magnificently.

Early in Angels, Cohn juggles four or five invading phone calls.  I was afraid he would curse the wrong people; but like a pro, he drops sweet words into their ears. He even treats his clients acidly, manipulating them all. He exclaims, “HOLD! . . . I wish I was an octopus, a fuckin’ octopus!” When he curses, his eyes squint and darken. Spinella portrays Cohn’s evil genius, chillingly, perfectly.

When Doctor Henry (versatile Carmen Roman) diagnoses Cohn with AIDS, Spinella spits and hisses like an angry cat. Cohn asserts he has “liver cancer.”  In tragic style, Spinella scales the heights of disdain and denunciation. He bullies the Doctor into hiding his AIDS diagnosis, claiming: ”Henry, I have clout. Homosexuals are people who have no clout. So, I cannot be a homosexual.” The words drip from the devil’s lips.

Spinella also transforms himself into Prior Walter 2, an aristocrat in a large, curled wig and powdered face. We can’t help but feel giddy, as Spinella goes from prickly and nasty to fluid and joyful in a blink.  Like a skilled magician, Spinella changes from GOP lawyer to 18th Century fop.  He leaps from his hospital bed and into Prior Walter’s dream, just as “Millennium Approaches.”

While on he’s on drugs in the hospital, Cohn’s twisted past haunts him:  Ethel Rosenberg, the woman Roy had electrocuted for being a Communist, quietly and creepily sits by his side, his only visitor.  Cohn got her executed by bullying and bribing the judge.

As the spasmodically dying Cohn, Spinella is deliciously irrational and eccentric. Though we sense Cohn’s fear, as Spinella invites us into the lawyer’s deep fear of “losing.” Sound familiar? Well, in the 70s, the actual Cohn served as President T’s lawyer and role-model!

Spinella’s Cohn fears losing his “clout.”  He must live up to his father’s cult of lawyers. After all, as playwright Tony Kushner explains, “Lawyers are the high priests of Washington.” Cohn even plays dead and then lashes out viciously, at his nurse Belize (marvelous Caldwell Tidicue). While the cheeky nurse stifles his hatred, Cohen lets fly with shocking, bigoted attacks.

After he draws a lonely last breath, Cohn returns, rising from Hell in a bright, yellow sport jacket, still shouting into the red phone.  Spinella’s zombie Cohn is still making deals and intimidating his betters. Someone in the supernatural world needs a cunning, immoral lawyer.

Spinella tears out my heart with his Roy Cohn, a real-life villain, unlike any other.

After the show, Spinella blew my mind when he explained that he played Prior Walter, the suffering hero of the show, 25 years ago.  This time, for his Roy Cohn, Stephen Spinella deserves two more Tony Awards. Don’t miss the Great Spinella!

Also see: “Angels in America–More Powerful & Prophetic than Ever”