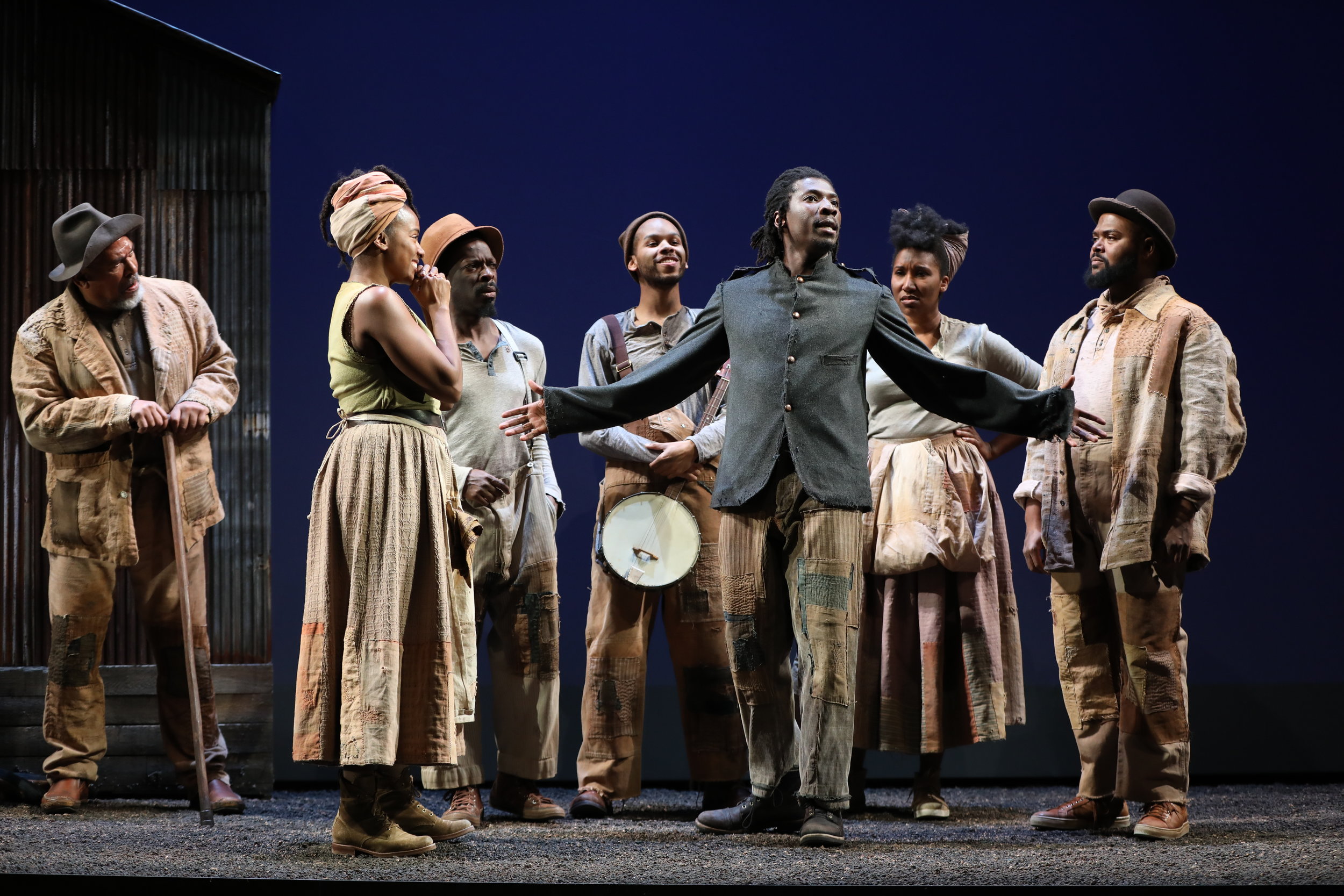 In “Father Comes Home from the Wars (Parts I, II, III)” Susan-Lori Parks alarms us with a slave named Hero who goes to the Civil War with his scurrilous white “boss-master.” Hero decides to go because The Colonel dangles freedom as a reward. Hero admits, “I will be helping out the wrong side.”

How can a slave make such a decision? How does his decision affect other slaves/workers? Why does Hero spout strict ethical arguments, when The Colonel has lied and tricked them all, before?

Each act begins with the stirring singing of jazz guitarist Martin Luther McCoy, setting an warm but ominous mood. In Part One, “A Measure of a Man,” the enlightening, comic “Chorus of Less Than Desirable Slaves” debates Hero’s foolishness and his, well … heroism. The Chorus–Rotimi Agbabiaka, Brittany Frazier, and Chivas Michael–know that Hero’s decision will change their lives, intimately. A small tin shack on a vast dark stage reflects their poverty and terror. The Oldest Old Man (lyrical Steven Anthony Jones) counsels Hero, revealing cruel facts of their lives.

Based on Homer’s Ulysses, the clever Hero (stalwart, sensitive James Odom) feels bound by strict codes of conduct—from early Southern values to the lure of freedom. Hero swiftly becomes our hero because he seems to decide for himself, even as a slave.

Hero is his own man, as the Chorus comically lay bets on his decision. Even under pressure from his loyal wife Penny (striking, strong Eboni Flowers), Hero follows The Colonel as part of the Confederate troops. The hobbling Homer (elegant, eloquent Julian Elijah Martinez) weighs in, touchingly. But Hero disregard the poetic advice.

Many slaves suffer from Hero’s “noble” decisions. Parks’ lilting language and decisive arguments make us wonder about Hero-ism. What choice can be freely made when the slaves, or workers, or unemployed are trapped in a bubble of propaganda, persuasion, and popular myth?

When Hero goes off to the war, in Part Two, “A Battle in the Wilderness,” we find them on a bleak stage, illuminated by a bank of lights, casting dark shadows. A shockingly modern, industrial stage features three giant, angled steel beams, starkly slicing the sky, mixing urban desolation with ancient battlefields.

When the Colonel leaves, Hero confesses, “I’m worth something, so me running off would be like stealing.” Hero is so tied up in Southern self-deception that he sees himself as a dollar amount.

Part Three, “The Union of My Confederate Parts,” takes us back to Texas, where the Chorus of Runaway Slaves form an affectionate comradeship. As Homer, Martinez sorts out the terrors of slavery and freedom, touchingly.

Revelations rain down for Penny and Homer and Hero, bringing tears and laughter.  The Master is no more. People we love and understand are gone North. Who is left to contemplate freedom? That’s for us to savor in a master-work of tragedy and comedy by the great Suzan-Lori Parks.