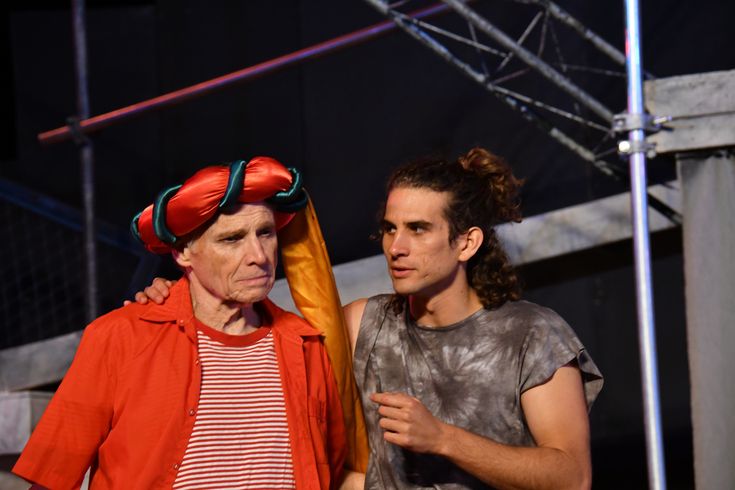 As Hamlet (flawless Nate Currier) wields an assault rifle, wearing plaid pajama bottoms. Even  his off-mic lines from the front rows ring clear and resolute. Currier evokes a young Hamlet who knows too much for his own good.

Nate Currir draws us onto his side by appealing to pop culture sensibilities. He bends Shakespeare’s poetry to the tune of Willy Wonka’s “Pure Imagination,” keeping our ears open for kitschy references. And our hearts open to Hamlet’s inevitable revenge.

Vengeance burns in us these days. Citizens and immigrants feel disenfranchised and tricked. With the dumbass in office, we feel Hamlet’s vengeance stinging in our gut. Currier’s Hamlet shows us the far-reaching repercussions of burning hatred. When Hamlet deals a double death by sword and poison to his corrupt uncle, the pain and cruelty on Nate Currier’s face exposes the joy and anguish of revenge. Nate plays a proud, sane citizen in a world of loons and crooks.

I love the “Play within the Play,” entitled “The Murder of Gonzago.” The Players enter from the back, shouting over our heads to hail their sweet Prince Hamlet. Hamlet greets them smiling, with a plot in mind to reveal his murderous uncle Claudius’ guilt.

Barry Kraft proves his mastery, redefining the word “stately.” Kraft succeeds as both amiable actor and forsaken King, ranging from vulnerable to powerful in a flash. Flowing seamlessly between Player and King, Kraft embodies Shakespeare’s critique of the temperamental, ambiguous nature of Power.

Perpetually in shock, Queen Gertrude (starry-eyed Arwen Anderson) is helpless to console her son, Hamlet. Anderson’s vacant stare leaves us wondering if there’s anything left inside, but her sequin dress and lavender feather boa expose her vanity.

Robert Currier calls “Hamlet” “the best play, by the best writer.”  I will add—in the most magical theater, in the embrace of Nature.  When Nate Currier delivers his “To be or not to be” soliloquy, my heart jumps a beat. Marin starlight illuminates this dark tragedy. Nature mingles with “Hamlet,” expressing Shakespeare on vengeance. The Curriers craft unique pleasures for all of us to enjoy.