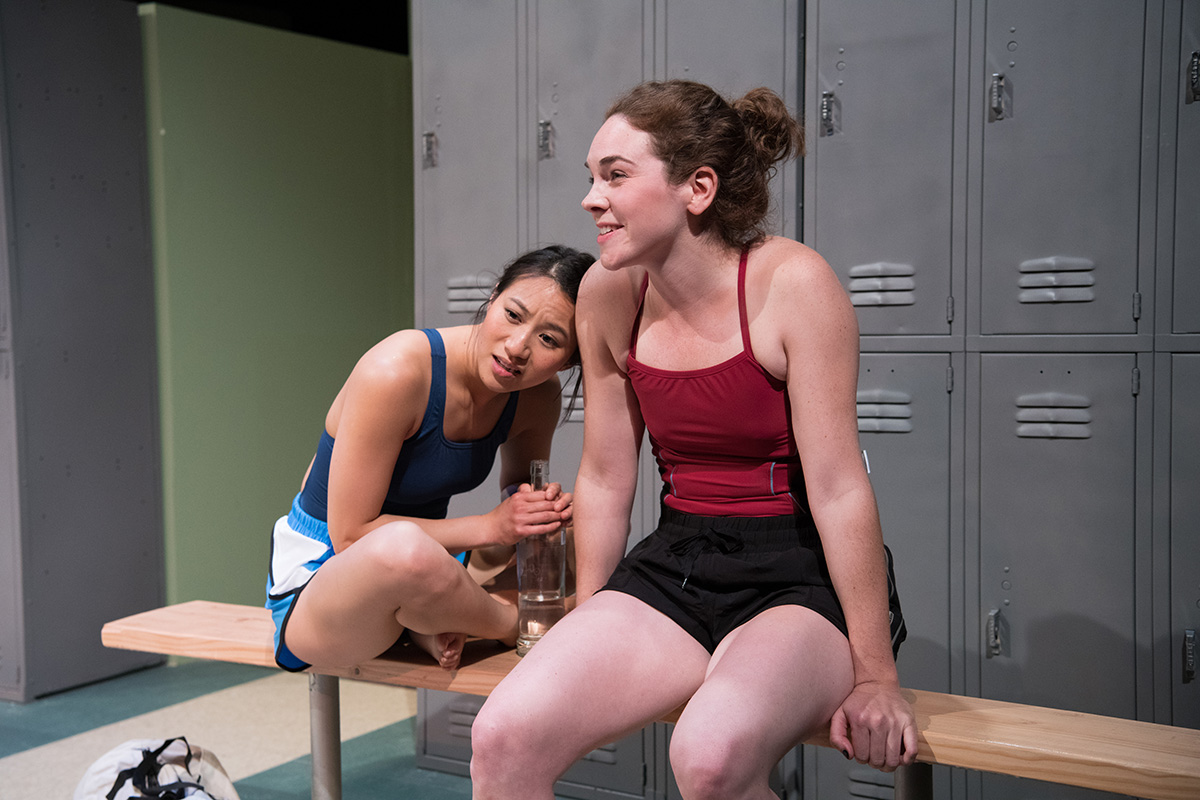 “Punch me Harder!” says Amy in the swimmer’s locker room in “Dry Land.” Remember these words because they will rattle in your ears, and soon enough the punches come hard and fast. “Dry Land” by Ruby Rae Spiegel invades our space and stays with us.

Yes, Spiegel tackles abortion, sex, and suicide. She goes beyond to explore the bond between two young women. Their intimate connection leads to unprecedented resilience and growth. Boisterous Amy (multifaceted Martha Brigham) and fidgety Ester (energetic Grace NG) form an unlikely duo, leading to a friendship that grows from necessity, rather than common interests.

“Dry Land” unfolds  in a pale lime-green locker room, illuminated by brash fluorescent lights. Designer Angrette McCloskey’s set is so realistic and accurate that it feels sliced from my own high school, like many interchangeable locker rooms from our adolescence.

We are thrust into the intimate spaces and secretive lives of two Florida teenagers: First, troubled Amy in cherry red one piece and short shorts. Amy talks crassly about DIY abortion methods.

Second, her close companion on the swim team, timid Ester, listens carefully to Amy’s tale of pregnancy. Both actors use brilliant physical movement to articulate the anxiety of their troubled lives.

Amy and Ester display harrowing, skewed personalities. “Dry Land” brings to life the fears of all sexually active teen girls: their anxieties about unwanted pregnancy and its multiple consequences. Yet, it is not all angst and sadness. The pain is served up with shots of jokes and moments of camaraderie. Slowly, we realize that girls’ lives add up to more than merely mistakes.

“Dry Land” is hard to swallow because Spiegel’s personalized play makes us uncomfortable with its starkness–so real at times. The gore and blood leave us gasping. Once the trickle of blood begins, Director Ariel Craft unleashes a flurry of erratic, frantic movements–becoming overwhelming.  Amy’s and Ester’s violent emotions turn tangible, their terror real.

Ester tenderly cradles the exhausted Amy, a modern day Madonna holding her Jesus. The trail of dark brown blood pours out, to be cleaned by the stoic janitor (vigilant Don Wood). The scene focuses on precise, methodical movement, to shield us from the horror.

Spiegel leaves us wondering: Are these crises happening all around us? What else is being washed away and hidden by the worn mop?

Spiegel juxtaposes Amy’s and Ester’s secret lives against the daily movements of the swim team swirling around them. Crass Reba (hilarious Amy Nowak) is the only other woman who speaks.

Reba floats in and out of Amy’s and Ester’s lives with animated talk about pizza, boys, and parties, reminding us what teenagers do. Rather than a fake happy ending, “Dry Land,” a woman’s coming of age tale, offers a climax both painful and satisfying. You have never seen a story like “Dry Land” on stage before: Now is our time!