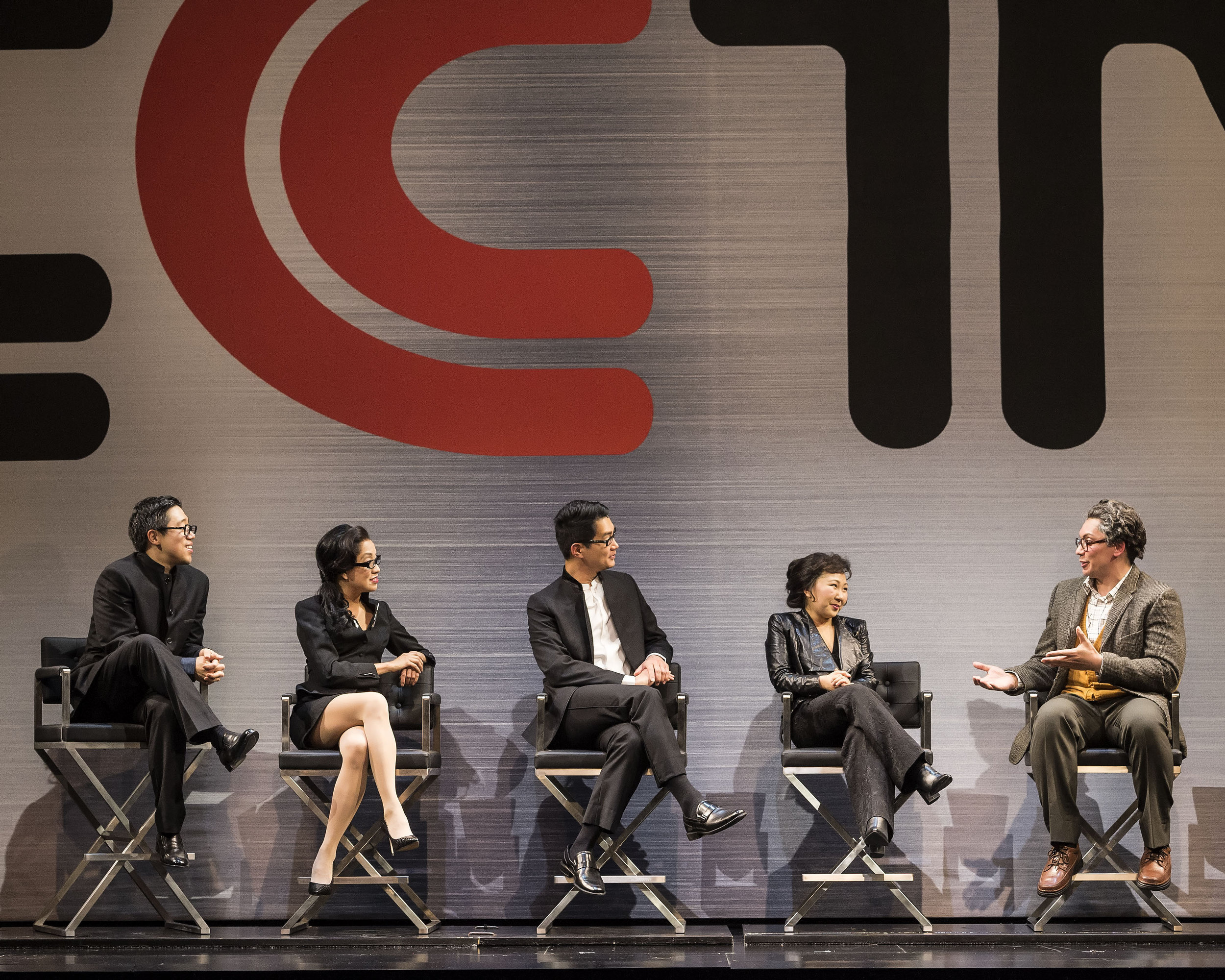 The Opening Night audience went wild at The Curran!

“Soft Power,” a  new play within a musical, on its world premiere tour, with a first rate almost all Asian cast, delivers a hilarious and emotionally compelling show. Tony Award-winning playwright, David Henry Hwang, replays recent political history and the “America First” movement. Hwang and composer Jeanine Tesori examine the U.S. power grab versus isolationism, mirroring a democracy that is failing us.

The show opens in a Hollywood office, with Hwang himself, portrayed sympathetically by Francis Jue. Hwang is meeting with a charming Shanghai TV producer, Xing, marvelously acted by Conrad Ricamora. As they brainstorm a new TV series which they hope will seize both Chinese and American markets, East/West differences fly thick and fast, sending up both cultures. Xing gives David sharp lessons in Chinese TV writing, romance, and obedience.

Xing confesses he is languishing in a stale marriage back home; he longs for the excitement of new love. Still, he insists that romance must never decline into divorce.  The Chinese mantra about marriage, “Stick with your Mistake,” returns later in scenes of thwarted romance.

By chance, Xing gets to meet Hillary Clinton (multi-talented Alyse Alan Louis), on her last campaign appearance—and he falls for her. Louis delivers a blowout number, meeting her fans American style, under McDonald’s golden arches. She enters on giant cheeseburger.

Alyse has it all:  looks, pipes, star quality, and wild choreography. She unveils three outfits down to her Wonder Woman costume, while balancing an order of McDonald’s Fries on her head!

What does “Soft Power” mean? Xing opines that China has hard power, but lacks influence in the arts. For him, Chinese culture remains provincial, not international. So how can China develop a compelling world culture?

See Act Two for a wild ride into the future in a fever-dream Chinese musical, where the Chinese capture international culture. They appropriate western models, which they then deny. Nationalism dictates that China insist they have created a new wave in the arts. When the dream musical is over, the freed human spirit plays the last card, finally allowing democracy to heal.

Does “Soft Power” strain to wrap up major themes of identity, fidelity, cultural appropriation, and democracy? Perhaps, but it’s so seductive that a sea of boisterously laughing, happy Curran patrons join a Be-In–where we all want to be.

It’s the Esalen experience where we can begin to fathom deep changes in the U.S. and work on challenges to tolerance beyond our sense of tribe.  In this joyful, communal setting, we come away starting to heal.