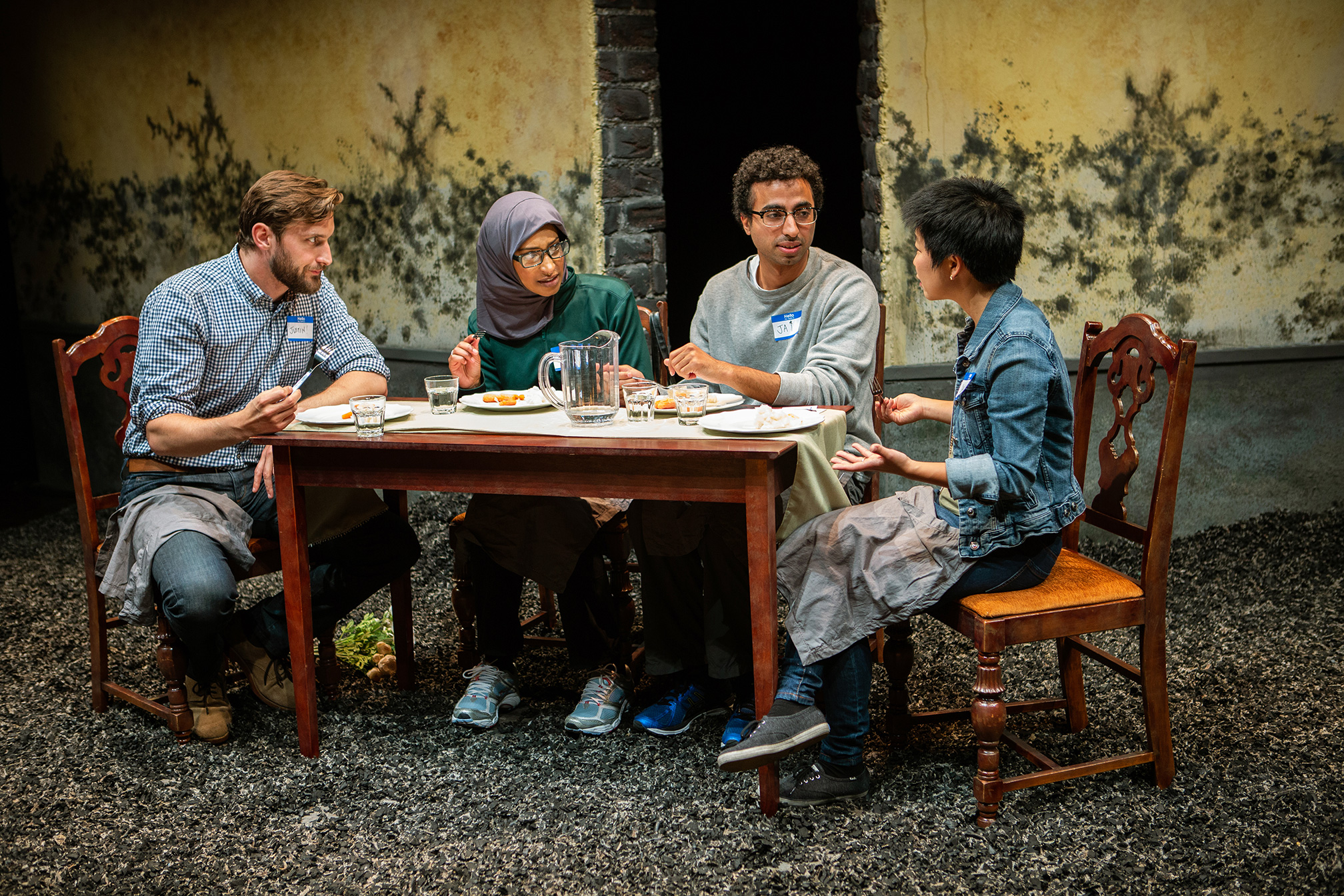 Dipika Guha’s world premiere of “In Braunau” by S.F. Playhouse unravels a tale of good intentions turned sinister. She gives us a modern day horror story about two idealistic 20-something Americans who move to Austria. And they decide to remodel Adolf Hitler’s birth house into a Bed & Dinner hostel.

With only a dilapidated, yellow house, a hanging light, and burnt paper littering the floor, we feel the force of devastating horror.  Videographer Shawn LaFrance effectively uses the walls to project videos of Hitler and Nazi Rallies between dream sequences.

Our interracial couple, impressionable Justin (dynamic Josh Schell) and susceptible Sarah (cunning Sango Tajima) are unprepared for the guests that appear. Justin and Sarah choose dinner instead of breakfast, because dinner helps to open “the pathway of empathy.”  They want to create a dialogue in a place where “evil came into the earth.”

Playwright Guha captures the funny American tourists who are unaware of their political and economic assumptions. Guha gives us perfectly innocent compatriots we can laugh at.  Yet, underneath their fun and jokes, Justin and Sarah hold an admirably idealistic view of themselves and the world. Their descent into white nationalistic propaganda touches a chord with the present. Do we get caught up in questionable moral decisions by believing what we have been taught?

“In Braunau” leaves us uneasy, taking us through the discovery of swastikas, energetic Nazi salutes, and eager fascist arguments. Six actors play multiple roles: from retailers to roomers to revolutionaries. Each scene builds our growing trepidation.

Although strange Susie and Alfred mouth blatant racist slogans, Sarah and Justin rent to them anyway because they need the money. But an unexpected bond forms between Justin and Alfred, leaving Sarah ostracized and in danger.

Susie and Alfred also reject Sarah simply because she is Asian American. Interactions between the couples members leave us queasy: Justin is being recruited for racism. To the Nazis, Justin is fair game, with his White guy look and education. Most important, he’s extremely gullible.

Sarah is left alone to fend off real enemies, as well as  imaginary ones. In a dream, Sarah strangles a fully geared up, swastika wearing, mustachioed Nazi  (resourceful Mohamed Shehata).

“In Braunau” forcefully and emotionally examines naive decisions and foolish intentions. Even good intentions can go rotten, if we fall under the spell of an evil and heartless “leader.”  We know that now, again, don’t we?