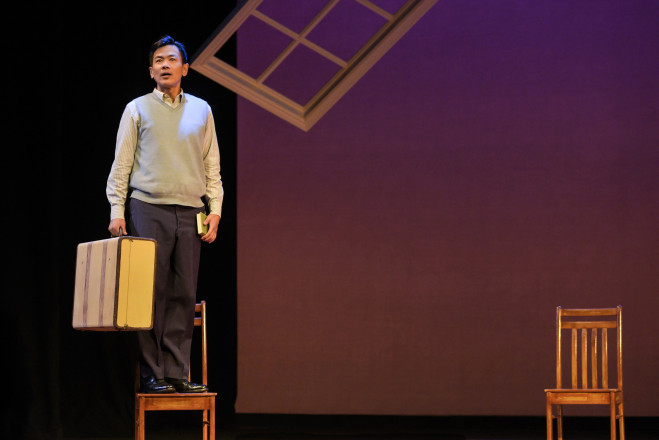 Playwright Jeanne Sakata brings to life the terrors of the U.S. Japanese concentration camps during WWII in a gripping one man show. Joel de la Fuente plays Gordon Hirabayashi, born in Seattle, who stood up against the unconstitutional camps in the 40s. President Franklin D. Roosevelt signed Executive Order 9066, authorizing the removal and relocation of American citizens to these camps.

Entering the Lucie Stern Theatre, I wonder, “Where are the props?” We see only four wooden chairs and a suspended window hanging over the vermilion tinted stage. A white lamp, floats above, like a milky moon. Lighting Designer Cat Tate Starmer creates a surreal palette, blending a stunning pattern of colors.

TheatreWorks’ “Hold These Truths,” still relevant and timely, questions  continuing U.S. violations of human rights. In the 40s, the victims were Japanese American citizens, and today, it’s Central American children in cages. When will the U.S. stop ostracizing people because of race and imaginary fears?

Hirabayashi’s narrative takes us from his earliest memories, told impressively in both English and Japanese. De la Fuente takes on multiple roles, voices, and mannerisms. He transforms himself into parents, friends, and foes–from a young man to a hunched older man.

Playwright Sakata captures Japanese pride and culture, in her dialogue, proverbs, and lyrical language. “Hold These Truths”  begins and ends with a Japanese proverb: “The nail who sticks out will be hit by the hammer.” As a self identified Quaker, Hirabayashi was the only one from  his Seattle community who refused to go to the camps–defying his mother and father.

Gordon fights up his case all the way to the U.S. Supreme Court, but discovers that his U.S. citizenship is worthless. The Court refuses to acknowledge him as a human with equal rights. His citizenship does not get him a job, assure his quality of life, or let him pursue his happiness. Being an American turns out to be worthless because of his race!

The real life story of Gordon Hirabayashi sheds light on one man’s struggle to validate his country’s laws and claims of equality. Decades later, the Congress finally acknowledged the cruel error. Lyrical, poignant, and at times humorous, Gordon and “Hold These Truths” teach us that you have to go against the grain to be heard.