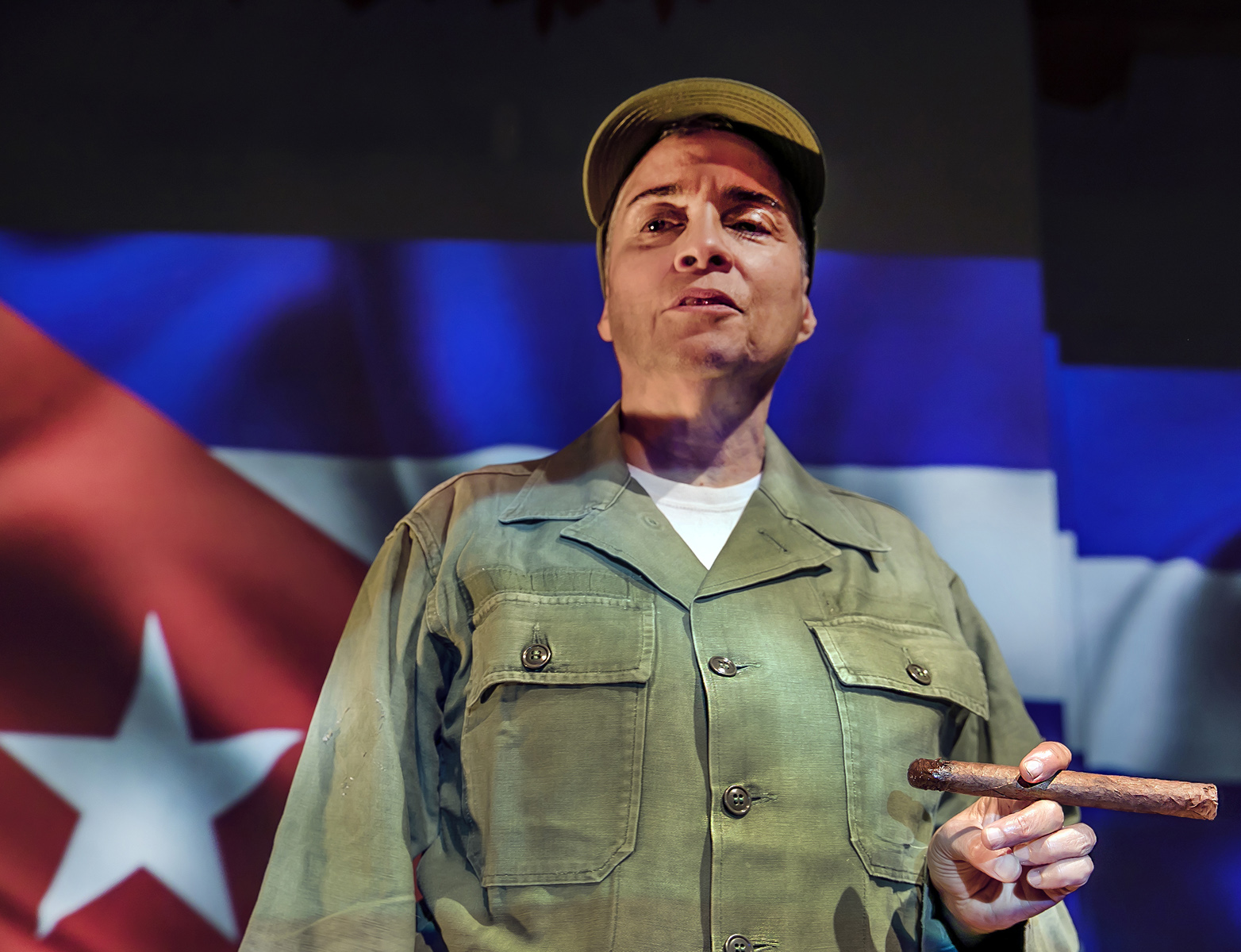 Pictured on the cover of Central Works’ program for Cristina Garcia’s “King of Cuba” is a sandcastle. It’s the work of a determined child, symmetrical and elegant in its simplicity. But look closely: the turret topped with a Cuban flag is crumbling.

And what will become of the castle and the flag when the tide changes? What will take its place? Funny as it might seem to comment on the program, the image captures, with uncanny precision, the tone of the play, at once wistfully satiric and deeply felt.

Set in Cuba and Miami, with a quick trip to Mexico City, “King of Cuba” satirizes what has become of the Cuba that Fidel Castro built upon the shifting sands of revolution. We explore, through a chorus of characters (Ben Ortega, Elaina Garrity, Marco Aponte, and Leticia Duarte) what has become of the people who fought with and against Castro for an ideal never fully realized, despite some obvious successes—like universal health care.

In Garcia’s play, Castro, or a version of him known as El Comandante, is played with fitting bombast by the remarkable Marga Gomez. El Comandante is on the brink of ninety, but he has never emerged from the shadow of his revolution. He clings to power but he and his vision inhabit a crumbling castle. He has lost, or never possessed, the intuition and empathy of the poet Jose Marti, quoted by expat and revolutionary alike; he has become a caricature of his virile younger self. When he visits Gabriel Garcia Marquez, on Marquez’s death bed, we sense that the writer’s words will prove more enduring than El Comandante’s legacy. This is El Comandante’s great fear.

Is the fear justified? Will he, with all his pomposity, fade after death into obscurity? What will become of revenge-driven Florida expats like Garcia’s endearing octogenarian Goyo? Goyo, played with comic grace by Steve Ortiz, is El Comandante’s would-be assassin. What purpose would Goyo’s life retain should he succeed in the assassination? What will be left, who will be left of Fidel’s Cuba when El Comandante is gone?

Garcia, who has family who loved and family who loathed the man, is too tactful and too wise, to offer an answer. El Comandante and Goyo drive the action and the comedy. But the younger chorus of Cuban nationals and expats anchor and humanize the drama; they—and we—are left to grapple with the conflict.

We are left to decide how the Revolution will be remembered, not the two old relics. Garcia makes this our business, and it is one of the great pleasures of her play.