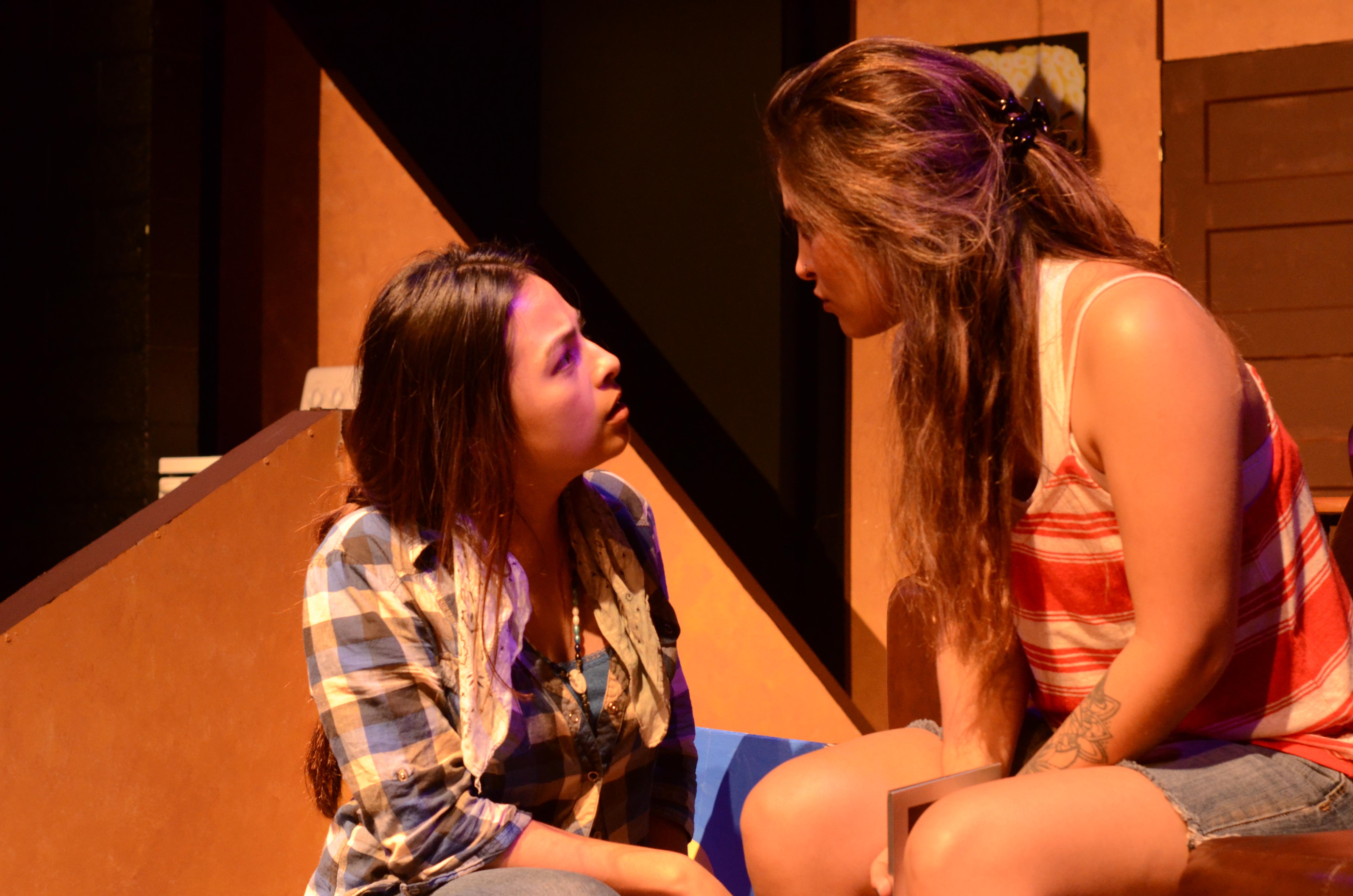 The fog seems a slightly spookier shade of night-time orange as we walk out of Berkeley’s Live Oak Theater, after catching “Woman on Fire” by Marisela Treviño Orta. The supernatural hovers over Those Women’s production. Each cast member’s energy is intensified by the ominous orange paint on Jared and Juanita’s Arizona house on the U.S./ Mexico border. Their short tempers bounce off the sharp angles of the set.

Glowing Leah Sanginiti plays a stoic Juanita with an electric current, sitting calmly as she uses exquisite imagery. Her smile remains desperate and vacant as she engages with her husband, Jared (reactive Micah Watterson). Their lack of connection hangs in the air when they kiss goodbye after another morning of pretending.

Orta uses striking and poetic language to tell the story of Juanita, who has left her family behind in Texas. She joins her sometimes-lovable Narc husband, a Border Patrol Officer in Arizona.

Lonely, and under the strain of a rocky marriage, Juanita becomes haunted by the spirit of Paola (severe Ciclady Rodriguez), an immigrant whose body was not properly buried. Paola tells Juanita she is trapped between realms, still wandering the Border. To make her spirit go away, Juanita must jeopardize her husband’s job by burying her. Juanita is our modern-day Antigone, caught between the laws of this world and the next.

Juanita’s social-justice-warrior sister Araceli (fiery Regina Morones) joins the already-tense household, rocking the boat with her relentless, sharp-edged comebacks to Jared’s jabs. Araceli takes center stage to challenge his petty assumptions: “I’m not vegetarian!” He defends himself, saying it was only a joke. Juanita rushes in to diffuse the situation; but the more she pushes and pretends all is good, the more isolated she becomes.

As Araceli, Morones’ speeches on justice are powered by strength and conviction from the earth. Araceli’s ideas on race and privilege at times elicit an agreeing “Mmm” or coffee-shop finger-snaps from the audience.

Rodriguez’s Ghost of Paola stares Juanita down with phantasmal power, stalking her around the stage with a supernatural drag to her feet. At one thrilling moment, Paola’s head appears in the window as the lights shift to eery blues and pinks.

As Jared, Watterson delivers classic “man behavior,” as well as lovely moments of vulnerability. Watterson humanizes the conservative, defensive Jared with beautiful soliloquies where he discloses his fears. In these moments he makes us think, “Dang, he is just like all of us.”

The energy and dread that hang over Juanita and Jared’s house hangs over my feelings about border politics and ideology, too. The sorrow of separated families is just so profound, the debates so detached, with each side operating on entirely different planes of thought.

Director Elizabeth Vega provokes that spooky feeling, giving us a deeply unsettling disconnect that goes beyond mere debate. Juanita, Jared, Paola, and Araceli are all motivated by fear of being abandoned. So, we put up borders, any border, to defend against our fears.

Orta’s play shows how the loneliness of the desert border can trigger the epiphany that we are all the same.