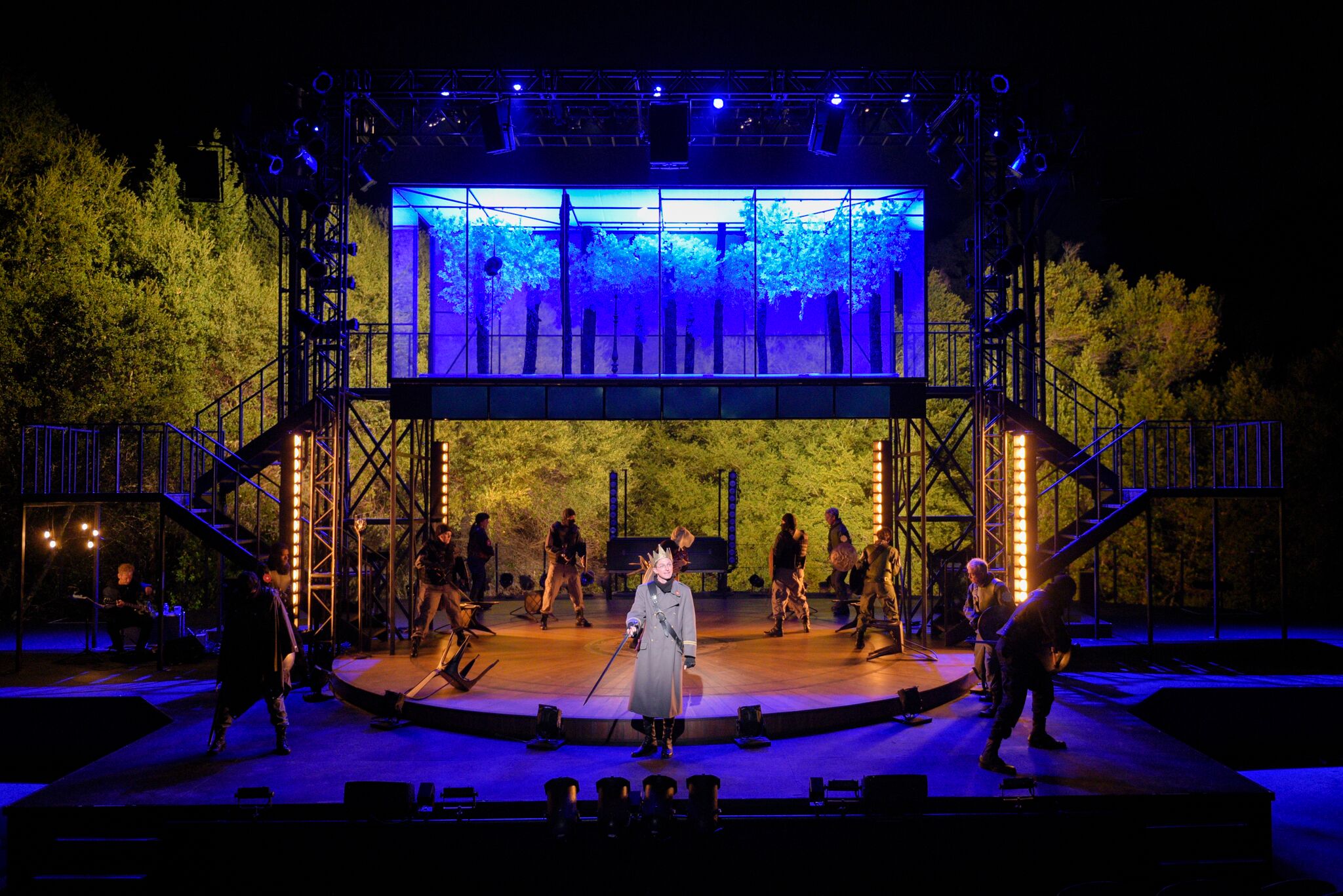 In Shakespeare’s “Henry VI” and “Richard III” plays, we find murders of brothers and nephews, harassing of wives and sisters, and clashes of sons and mothers. “The War of the Roses” exposes the stubbornness and self-promotion we find ourselves in, today.

Power politics persist in the clash between Shakespeare’s poetry and the steely set.  A succession of wannabe Kings trample over friends’ and realtives’ rights,  invoking war and brutality to silence opponents:

Ting’s “Wars of the Roses” is imposing and humanly gripping on Ball’s majestic set. Cal Shakes pulls out all the stops, invoking every sexy, choreographed, theatrical trick—including helpful electronic signs to keep us updated on names and battles.

The scurrilous, treasonous affair between Suffolk (Gardner) and Henry’s proposed wife, Margaret of Anjou (Celik), proves to be the linchpin to the decades long conflicts between White Rose and Red.  (Adultery also figures to be a big issue in our upcoming impeachment trial.) Sexual treason runs parallel to political treason in the “War of the Roses,” and in our time, too.

Ting’s directing style comments on itself—witty and comical—while enacting all the horrors that criminal rulers can imagine. These actors slip effortlessly from one character to another—almost always engaged in lies, corruption, murder, and war—just to grasp the crown.

Certainly, the Republicans and some Democrats have learned from these wealth-grubbing early political warriors. They are implacable, they never compromise, their side is always right.

By the time we get to the thrilling conclusion in “Richard III,” we know their game. Great actors play cold-hearted, playground bullies who prey on women, children, and the weak.

When Danny Scheie plays Richard III, we know what he will do. He viciously murders his way to the throne. Trump on steroids. Confiding in us via hand-held microphone, Richard murders children, and unveils his ego from the get-go:

Why, I, in this weak piping time of peace,
Have no delight to pass away the time,
Unless to see my shadow in the sun
And descant on mine own deformity.
(“Richard III”)

But by that time, we’ve had our fill of murder and ego, and long for more depth in Richard. We want new answers, not more of the same.

I guess we can ask the question: Why does #45 spend all his time accumulating power, women, and enemies? Have we slipped back to living in fear under violent feudalism? Eric Ting’s “War of the Roses” cries out, forcefully: “We are repeating history!” See Cal Shakes’ spectacular summer gift.