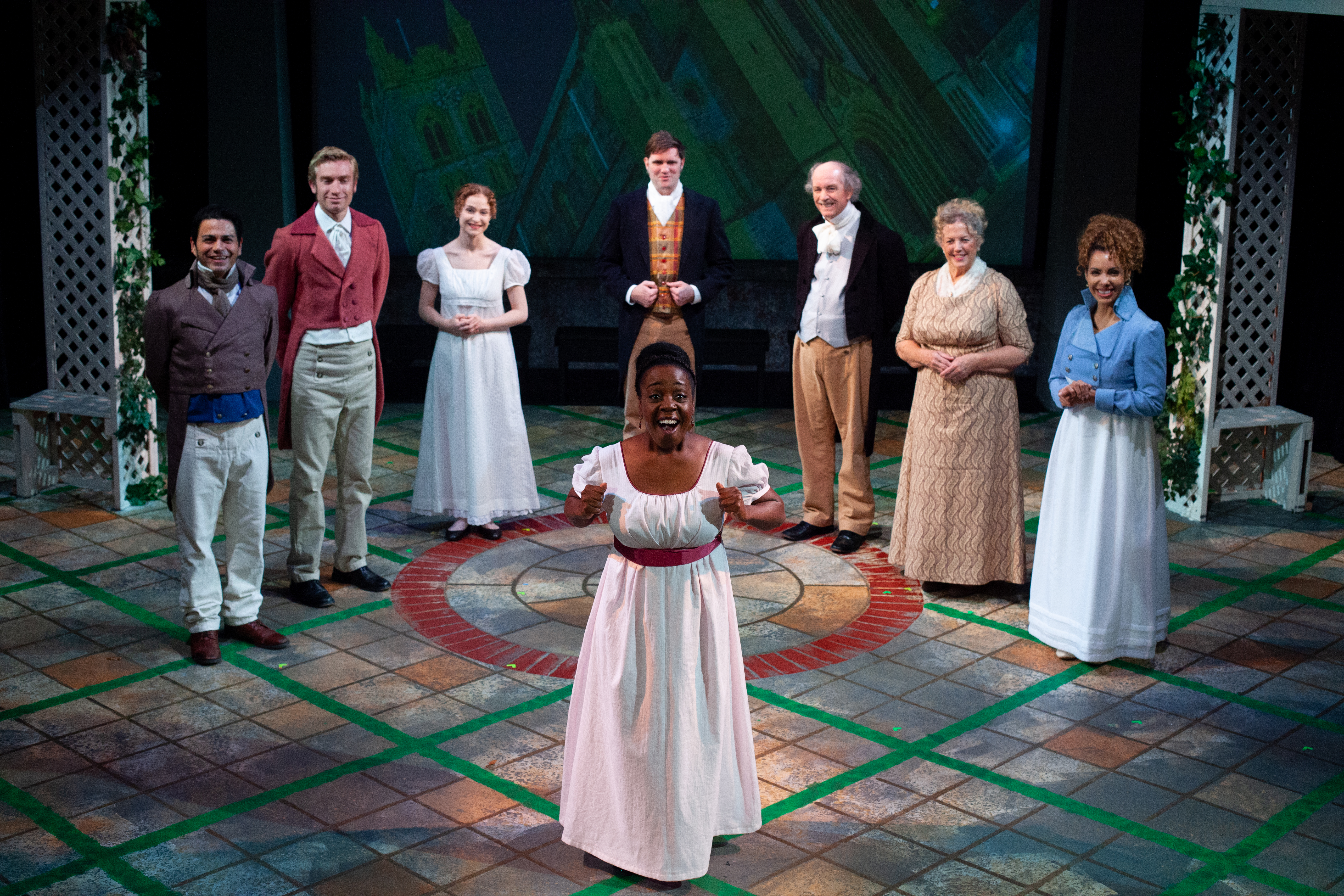 Imagine a dark stage with shadowy figures holding elaborate picture frames around their dimly lit faces. The obscure setting evokes a mysterious corner of an old castle. The veiled figures hurl warnings at a frightened young girl who is searching for clues to a murder.

This emotional climax in Pear Theatre’s “Northanger Abbey,” adapted by Diane Tasca, has us on the edge of our seats, though it takes substantial exposition to get us there.

The play begins with paragraphs from Jane Austen’s novel projected behind the actors, who are reciting the words. As the projection transforms into picturesque British streets and lush greenery, the text-based narrative continues. Tasca and Director Troy Johnson employ a unique style of word-for-word storytelling, submerging emotion and nuance. Ironically, the style evokes the constrained sensibility that Austen criticized.

Catherine embodies early feminism and revolt, defying the maneuvers of chauvinist John Thorpe (rousing Matthew Brown), who seeks to gaslight her into commitment. Instead, Catherine is drawn to attractive leading man Henry Tilney (enthralling Peter Ray Juarez). His confident and impassioned air is refreshing in Austen’s world of gentility, inspiring liveliness in Catherine.

Catherine’s sensibility gives way to impulsive fantasies as “Northanger Abbey” finds its stride. She imagines eerie scenes of murder and intrigue. Catherine romanticizes these horrific daydreams and is disappointed whenever she awakens. Director Johnson wonderfully emphasizes each of these moments through effective staging, portraying dimly-lit furniture as sinister characters.

When Catherine breaks from these dreams and reverts to the self-conscious manners of Austen’s time and class, the play’s energy becomes muted. After almost two hours, we long for the emotional range of the dream scenes.

“Northanger Abbey” will delight Austen fans with Tasca’s faithful adaptation and Johnson’s rich staging. Modern audiences will appreciate the focus on the novel’s progressive ideas, yet I still yearn for the play to break free from civility and constraint.

A second “junior” production, featuring a youth cast, is directed by Melinda Marks: